The leader of the "DPR" Alexander Zakharchenko dismissed terrorist commander of the Vostok battalion Khodakovsky from the post of the " Secretary of the Security Council " of the "DPR" retroactively. Khodakovsky himself told bout that on his page in LiveJournal.

The militant himself got to know about his "resignation" only today, on February 22nd, 2016.

"There was (on the "official website of the DPR"- OstroV) decree as of March 2015 about my dissmisal from the post of Secretary of the Security Council: it wasn’t there yesterday. They put it in March documents of the last year (?????) – boys are playing. I wonder what’s in their heads?"- ironically said Khodakovsky. 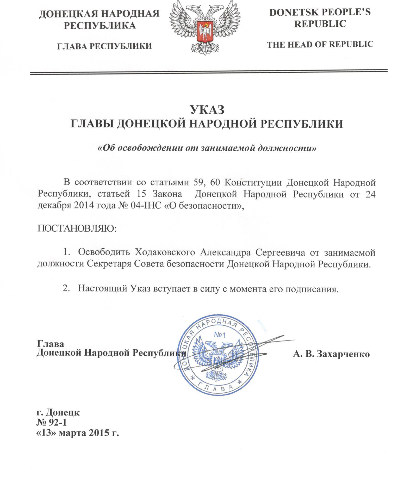 Khodakovsky stated in his commentary that there was no change of curators in the "DPR" but a change of course under the former leaders."

"I prepared, in fact, for the last battle or exile, seeing how we have been recently actively pushed into Ukraine - and then nothing would depend on me. But there was information that the doctrine has changed in our favour, and at the high level it was decided to slow down with the forced integration, it means that the critical question is how we will continue to live and our work has begun ... ", - concluded the leader of the Vostok.

Khodakovsky Alexander is a former employee of the SSU, since the first days of the Russian hybrid war against Ukraine he broke the oath and became one of the leaders of Donbass terrorists. In the struggle for power and control over cash flows he was in confrontation with the so-called "head of the DPR" Alexander Zakharchenko.