Two questions about Donbas. How Zelensky's poll will affect the military conflict in the region
10/23/2020 14:26

Karabakh dynamite. What is happening between Armenia and Azerbaijan and why are new armed clashes dangerous
10/08/2020 16:59

The largest financial industrial groups (FIGs) of Ukraine continue to develop successfully under the new government, including by means of public resources. Thus, they refute the thesis of co-owner of FIG Privat Ihor Kolomoyskyi that "there are no more oligarchs, they died".

The most indicative in this sense are the results of the tender of PJSC Ukrzaliznytsia (UZ), which took place on August 23.

As predicted by OstroV, Stepan Ivakhiv's WOG group dropped out of the supply of diesel fuel (DF) or one of the largest state corporations in Ukraine.

Instead, half the volume was received by Oil Trade 2018 from the Privat orbit, WOG's long-term competitor in the Ukrainian oil products market.

Whereas during the presidency of Petro Poroshenko, applications of Privat's firms to participate in tenders of state-owned companies were rejected under various pretexts.

If we take UZ, then the group of I.Kolomoyskyi last sold oil products quite a long time ago - during the premiership of Yulia Tymoshenko, i.e. 10 years ago.

Therefore, the rejection on September 6 of the application of PJSC Ukrtatnafta, controlled by Privat, to participate in the tender of the Ministry of Defence of Ukraine for the purchase of fuel for $28.8 million should be considered a purely technical failure.

Yes, the new minister has already replaced Stepan Poltorak – but, of course, he has not yet had time to conduct a total personnel shake-up in the department, including the replacement of members of the tender committee.

As for WOG, it is obvious that now it will cease to supply diesel fuel not only to UZ, but also to Energoatom and other large state-owned companies.

According to published data, Oil Trade 2018 will supply 20 thousand tons of diesel fuel to railway workers, i.e. half of the total volume ordered. 20 thousand tons went to the companies Torum and Alliance Energy Trade fifty-fifty.

Participants in the oil market include Torum in the orbit of the Trade Commodity group. Under P.Poroshenko, it took the lead in the supply of gasoline and diesel fuel for government agencies, including Ministry of Defence.

This group is associated with businessmen Oleksandr Hranovskyi and Vitaliy Adamovskyi.

Moreover, O.Hranovskyi, being deputy from the Poroshenko Bloc in the previous convocation of the Verkhovna Rada, had very good relations with Ihor Kononenko, first deputy head of the PPB parliamentary faction. 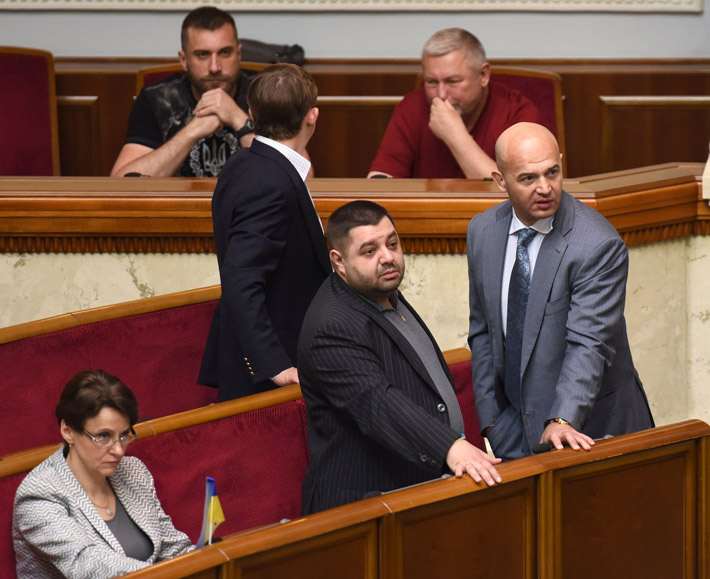 The latter, in turn, is known as a long-time friend and business partner of P.Poroshenko. Therefore, it is logical that now the conditional Trade Commodity group had to move over thoroughly.

But since it, unlike WOG, did not completely leave the state procurement sector. It is hard to escape a conclusion that the owners of the group managed to reach agreements with the new authorities.

What is more, this is not about the office of the president or the Cabinet of Ministers of Ukraine, but about the "shadow" center of real power, represented by the institution of "watching" under official state bodies.

The media earlier reported the arrest of a tanker with fuel for Trade Commodity in the Mykolaiv port by revenue officers and linked this episode to the absence of protection after P.Poroshenko left.

The results of the August tender of UZ show that the owners of Trade Commodity managed to solve this problem.

Although, according to director of the A-95 consulting company Serhiy Kuyun, the investigation on suspicion of smuggling in relation to the episode with tanker in the port of Mykolaiv continues.

He is known as a friend and business partner of Viktor Medvedchuk, both of whom deny the joint business.

But at the same time, the return of V.Medvedchuk to big-league politics (he was elected to the Verkhovna Rada on the list of Opposition Platform – For Life) strangely coincided with the company's entry from Glusco's orbit into the Ukrainian state procurement sector.

Earlier, OstroV noted: the role of V.Medvedchuk in the Ukrainian oil market has grown significantly after the companies associated with him have become virtually exclusive importers of Russian liquefied gas to Ukraine.

At the same time, they received the Ukrainian part of the Samara-Western Direction oil product pipeline from the Russians, through which diesel fuel is being supplied to Ukraine from Russia.

The dependence of the Ukrainian oil market on Russian supplies (created, by the way, artificially under the previous government) was also considered in detail in previous publications.

Therefore, it remains to be recalled that any current Ukrainian government is not interested in a "fuel war" with the Russian Federation – i.e. termination of the import of diesel fuel and gas from there.

Here is the answer to the question of how the company from the Glusco orbit appeared among the counterparties of Ukrzaliznytsia.

Akhmetov&Novynskyi: So far, so good

Owner of the SCM group Rinat Akhmetov and his partner, owner of Smart Holding Vadym Novynskyi feel themselves quite well after a change of power.

In his interviews, I.Kolomoyskyi strongly hints that their Easy Street will soon end. But so far this has not happened.

So, it became known in early September that the company from the Metinvest holding of R.Akhmetov and V.Novynskyi won 29 tenders for the supply of metal products for Ukrzaliznytsia.

The total amount of concluded contracts is $4.2 million. This is much more modest than oil traders get. For example, Oil Trade 2018 will earn $20.5 million, Torum and Glusko Ukraine - $10.2 million each.

Nevertheless, the fact itself is important: in previous years, R.Akhmetov's group sold its products to railroad workers (partly directly, partly – the products of Metinvest metallurgical plants were bought by straw companies, which subsequently won the UZ tenders) and it still remains in business.

The situation is not so clear with their colleagues from ArcelorMittal, which owns Ukraine's largest Kryvorizhstal mining and metallurgical plant.

Let us recall that the SBU became interested in the activities of this enterprise in late July – although environmental violations are within the competence of the prosecutor's office.

Nevertheless, after a personal meeting between the plant' management and President Volodymyr Zelensky, it was announced that the parties were able to agree on all the issues of concern.

Representatives of ArcelorMittal Kryvyi Rih (AMKR) promised social investments ($2 million to repair the city stadium and $4 million a year to the specially created Health Fund), as well as $1.8 billion for environmental modernization.

The work of the plant after that was unlocked by the security forces. But as it turned out, the period in this story has not yet been put.

As head of the Office of Large Taxpayers of the State Fiscal Service of Ukraine Yevhen Bambizov told on September 4, his unit counted AMKR claims for $364.2 million.

According to him, an understatement of the rent for land, work with bogus firms to minimize tax payments and other "arts" were revealed during the audit.

To be true, the State Tax Service of Ukraine (currently being created on the basis of the SFSU) clarified the next day that decisions on the results of inspections at AMKR have not yet been made, and the administration of the plant stated that it did not receive tax notices with claims.

Nevertheless, it follows that the new authorities have at least one more "argument" (apart from the criminal proceedings on "ecocide") in the difficult dialogue with ArcelorMittal. Even if the information leak turned out to be premature.

On September 5, the SBU employees visited the Kryvyi Rih plant again. Together with them, representatives of the State Nuclear Regulatory Inspectorate wanted to inspect the production, but they were not allowed to check.

This means only one: the pressure of the security forces and regulatory bodies on AMKR will increase in the near future.

Against the background of such obvious problems at ArcelorMittal, the situation with the mining and metallurgical business of R.Akhmetov and V.Novynskyi looks quite prosperous. There are reasons for this, and we will talk about them later.

Meanwhile, it should be noted that another oligarch, owner of the Finance and Credit group Kostyantyn Zhevago also has no problems in the iron ore segment (Poltava and Yerystivka mining and processing plants).

But the only producer of heavy vehicles in Ukraine, the Kremenchuk association AvtoKrAZ was taken away from him.

As it became known at the end of August, the Commercial Court of Kyiv granted the claim of state-owned Oschadbank to a number of companies from K.Zhevago's orbit to foreclose on their shares of JSC AvtoKrAZ - in repayment of the debt to the bank.

Oschadbank reported that this package would be sold at the auction by the State Executive Service of Ukraine. Who will become its buyer is more than an interesting question.

But most likely, the dispute between AvtoKrAZ and Oschadbank regarding 32.7% of the authorized capital has yet to go through the courts of appeal and cassation.

Since AvtoKrAZ has already lost similar processes in a package of 23% stake in appeals and cassations –the transfer of control over the association to the new owner now seems to be only a matter of time.

K.Zhevago is trying to defend himself through the bankruptcy of AvtoKrAZ (the procedure for a number of enterprises included in the holding was initiated by the debtor at the beginning of this year) – but there is no guarantee that this will work.

Friday, October 23
Rostov oblast wants to fence itself off from "DNR/LNR" with medical aid posts because of COVID-19
All-Ukrainian poll on election day to be financed by subject of elections Servant of the People
Servants of the people to report on "excursion" to front line to three parliamentary committees
Major social companies not involved in holding of presidential poll on election day
Another anti-record… 7517 new cases of COVID-19 recorded in Ukraine
Thursday results in the occupied territories of Donbas. The highlights
Thursday, October 22
"LNR" occupiers admit that they employed only 30% of miners dismissed from liquidated mines
Death rate from COVID-19 in "DNR" exceeds 7%
Occupiers in Donbas violate ceasefire 5 times and received a "response" - JFO
"DNR" admits that it cannot cope with COVID-19 and need help from Russia
Higher and higher! More than 7 thousand new cases of COVID-19 recorded in Ukraine for the first time ever
Wednesday results in the occupied territories of Donbas. The highlights
Wednesday, October 21
18 people died from COVID-19 in "DNR" over the day, more than 320 cases of pneumonia were detected
More than a hundred people's deputies from Servant of the People go to Donbas. They promise to stay overnight on front line
Heading for 7000! There is a spike in new cases and deaths from COVID-19 in Ukraine
All news »