The General Staff of the AFU reports the total combat losses of the Russian invaders in the period from February 24 to April 9, 2022:

The data is being specified. The calculation is complicated by the high intensity of hostilities, - the General Staff noted. 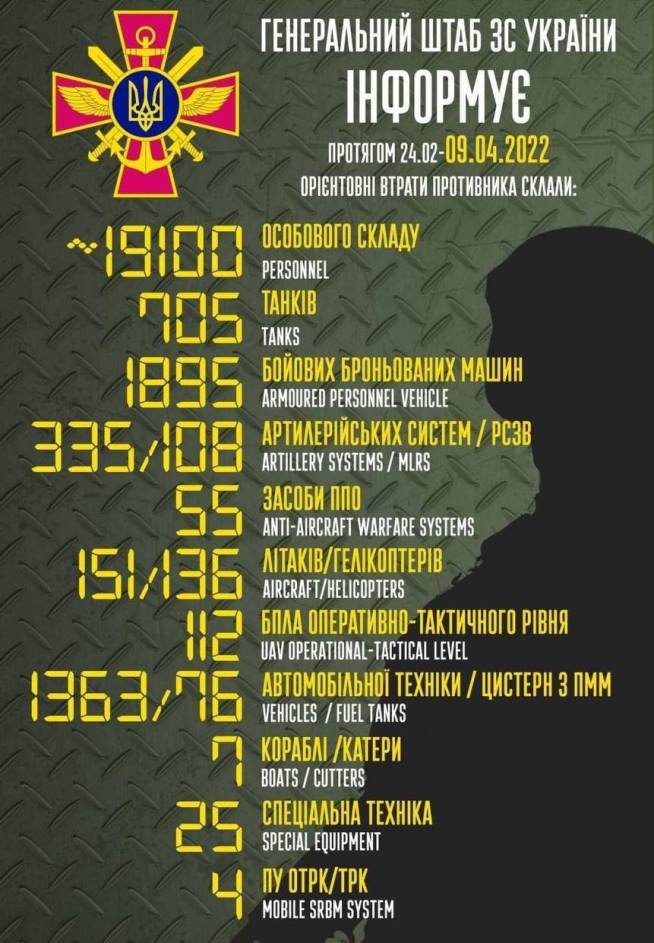 Wednesday, September 28
Rashists "ask" men in Mariupol to come to military enlistment office "with stuff"
Tuesday, September 27
Military enlistment office to be opened on border with Georgia for russians fleeing from mobilization
Rashists lose 550 occupiers, 40 tanks and AFVs over a day
Ex-president of russian federation threatens Ukraine with nuclear strike - Medvedev is sure that NATO will "swallow" this
USA sees no signs of russia preparing to use nuclear weapons - White House
Zelensky: Deterrence of invaders in Donbas is number 1 goal for AFU now
Ukraine is not going to announce additional mobilization - Podolyak
Monday, September 26
"Decisions on active actions of defense forces have been made". Zelensky holds regular meeting of Headquarters
"No one will fight!". Man shot at head of conscription commission in Irkutsk oblast 6 times (VIDEO)
We have success in some areas of front - Zelensky
USA warns russian federation about catastrophic consequences of nuclear strike and "decisive response"
USA hands over NASAMS air defense systems to Ukraine, but there should be more - Zelensky
Friday, September 23
"Karaoke microphone and music speaker". How does the "referendum" in Donetsk take place (PHOTO, VIDEO)
AFU destroy 550 rashists, 18 tanks, plane and helicopter over a day - General Staff
Start of "referendums" on annexation of occupied territories announced in russia
All news »