Kremlin engages in combat operations in Donbass not only military forces but also unlisted private military structures, one of which is known as Vagner PMC. It is stated by investigation of the Russian Fontanka newspaper.

As the newspaper notes, the Vagner PMC with its heavy infantry weapons and armored vehicles and staff of about 1,000 people does not formally exist. This division is not found in any law enforcement agencies or in the registry of legal entities. Soldiers are absent in the official lists of personnel.

"It can not exist: in Russia there is no law on private military companies and civil organizations having the arsenal of armored fighting vehicles, portable anti-aircraft systems and mortars. But it does," - noted the investigation.

Hypothetical PMC commanded by a person with a call sign "Vagner", according to Fontanka, acted in Crimea in the spring of 2014 and then in Luhansk region. Main forces were brought to Syria in the autumn of 2915.

The newspaper got to know that Vagner soldiers received state awards for combat operations on the territory of Ukraine and Syria.

"On February 23rd, May 9th there is awarding in Molkino.A grey man in leather flight officer's jacket comes, the security officer in the rank not lower than Major-General. At first he gives awards to those who are in the ranks, to some Order of Courage, to others Order of Honour. "Then he read out those who are not present in the ranks – posthumously," – say soldiers. 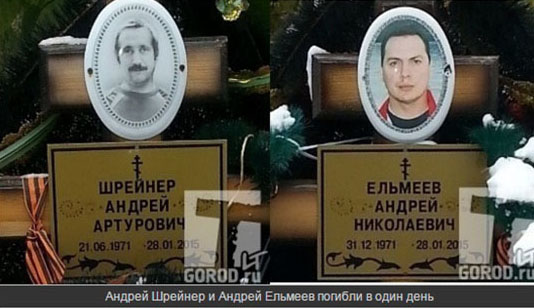 Elmeyev and Shreyner died in January 2015 in the battles near Debaltsevo. They were in the reserve and worked for Vagner under the contract. Their names were read out in the ranks on May 9th, 2015: "to award Order of Courage - posthumously."

The Order of Courage is a common award for the dead Vagner soldiers, -assured veterans - so these were not the only order for PMC employees. Awards were mentioned before – one of them was a report about the posthumous awarding of the Order of Courage to 37-year-old fighter of Slavyansk Corps and Vagner PMC Petersburger Vladimir Kamynin who was buried in September 2014 in the Sestroretsk cemetery.

A high percentage of loss that is not characteristic of private military companies, usually performing local and narrow professional tasks in thecombat zone and are not involved in the attack, cab be explained by "the tactics of World War II":

"Only bayonets miss on the AK and the rest is like World War II. As in Debaltsevo - people with the equipment were made to go to the field and the command - your job is to capture a checkpoint. Andthere were like food for powder. Those who have combat experience – survive somehow more or less but still," - they say.

Vagner PMC soldiers adhere to this tactic in Syria.

"What are we doing there? Come in the first wave. We direct the aircraft and artillery, force out the enemy. Then Syrian special forces come and are followed by Vesti-24 together with ORT with cameras to interview them."

Thursday, October 06
Haidai: Russia begins "partial mobilization" in occupied Luhansk region – summons are handed out to everyone
Russia has become the largest "supplier" of heavy equipment for Ukraine - WSJ
Rashists launch 7 rocket attacks on high-rise buildings in Zaporizhzhia at night (PHOTO)
Putin signs "decree" on transfer of Zaporizhzhia NPP to control of russia
Wednesday, October 05
Ukraine submits joint application with Spain and Portugal to host 2030 FIFA World Cup
Deoccupation of Luhansk region has begun, several settlements have been liberated - Haidai
Old faces of traitors. Putin appoints gauleiters of 4 annexed territories of Ukraine
Putin signs documents on annexation of occupied Donbas, Zaporizhzhia and Kherson oblasts
UN cannot send investigative mission to Olenivka "due to lack of security guarantees"
AFU carry out fast and powerful movement in southern Ukraine - Zelensky
Tuesday, October 04
Lukashenko admits that Belarus is participating in russian war, but swears that there will be no mobilization
Lavrov states that Ukraine does not belong to countries territorial integrity of which cannot be violated
Ukraine not to negotiate with russia as long as putin is president - decree
Federation Council supports illegal decisions to "join" occupied territories of Ukraine to russian federation
Since 2014, "DNR" militants have been part of armed forces of Russian federation and were subordinate to regular russian officers - Khodakovsky
All news »