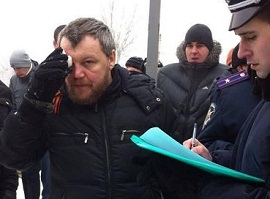 Occupation authorities of the "LNR" have opened a criminal case against Andrei Purgin, one of the active participants in the so-called "Russian Spring" in the Donetsk oblast. This was reported by the Donetsk Aborigine Telegram channel, associated with Purgin.

According to the channel, the case was initiated over the disclosure of classified information.

It is reported that in 2014, Andrei Purgin published a certificate of captain of the Luhansk department of the SBU A.Rudenko, who reported to Kyiv six years ago "about the intentions of pro-Russian non-governmental organizations to hold events with ultimatum demands In order to stop the implementation of obstacles to the expression of will of the population of Eastern Ukraine, associated with the desire to enter into the Russian Federation" and reported on the planted SBU agent in the separatists' ranks.

Rudenko, who has now violated his oath, is a colonel of the "LNR Ministry of State Security", therefore, the department where he serves regarded the publication of the old document as a disclosure of classified information.

"The case against Andrei Purgin was initiated for encroachment on the "bright image" of the current "defender of the constitutional order" in the ranks of the "LNR Ministry of State Security", concurrently, the main fighter with creation of the aforementioned "Luhansk republic" in 2014, captain of the SBU at that time - A.Rudenko", - the "Aborigine" writes.

"It sounds crazy, but the "LNR Ministry of State Security" filed a case for disclosing a secret report to the SBU of Ukraine, which mentions the infiltration of a Ukrainian spy network into the ranks of the "LNR" leadership, the publication of information about people who were fighting against activists in the "LNR", who formed criminal cases, held "events" with them and are still doing this, only now wearing the uniforms of the "LNR Ministry of State Security", - he is indignant.

"All that remains is to start jailing for organizing the "referendum" and creating the "republics", - the author of the Telegram channel sneers.