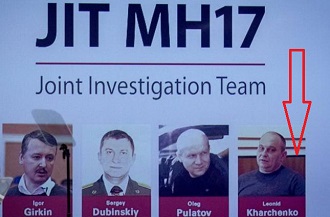 Leonid Kharchenko, a key person involved in the crash of the Malaysian Boeing MH17, shot down in the sky of Donbass in 2014, was arrested in occupied Donetsk. This is reported by BBC.

The agency recalls that Kharchenko is one of four defendants in the case which is currently being considered by a court in the Netherlands.

In 2014, Kharchenko had a callsign "Mole" and was the commander of one of the units of the military intelligence service of the fake "DNR". In the Netherlands, Kharchenko was formally charged with involvement in the crash of Boeing, the trial began on March 9 this year.

Literally 2 days later, on March 11, he was detained near his house in occupied Donetsk by the "DNR" authorities and arrested. However, his arrest was connected to a completely different criminal case.

On May 8, the arrest of the former "DNR" military intelligence officer was extended for another two months. Now, according to interlocutors of BBC, he is being held in a pre-trial detention center in Donetsk at the 4 Kobozeva Street.

Kharchenko's comrades-in-arms, who agreed to speak with the agency, believe that they want to isolate the former intelligence officer.

"The accusations are ridiculous - allegedly participating in an illegal search in 2014 and illegal possession of weapons, - BBC interlocutor, familiar with the case of t arrested Kharchenko, told. - The victims have no complaints on the first point. On the second one - the Ministry of State Security issued this gun to him in 2019 to ensure personal security in connection with the MH17 case".

All this was done to isolate Kharchenko, - the interlocutor of BBC considers.

Kharchenko's comrade-in-arms believes that the former military intelligence officer was placed in detention in order to exclude the possibility of his abduction by the Ukrainian secret services.

"Kharchenko quietly lived in Donetsk till the last and did not suspect that this could happen to him", - the former comrade-in-arms of Kharchenko told BBC. - He may be guarded in such a cruel way, but this is a very strange way to protect a person".

Ukrainian authorities put Kharchenko on the wanted list in July 2015. He was charged in absentia with the creation of a terrorist group, criminal proceedings on suspicion of involvement in the crash of Boeing MH17.were instituted against Kharchenko in 2019.