Obviously, the main topic of all separatist publications last week was signing of the notorious "Steinmeier formula" by the Ukrainian party. It is also obvious that many of them literally voiced the agenda sent from the Kremlin…

The tone in the basis of its enthusiastic responses to the small-town informational resources was set by the Russian political technologist Alexey Chesnakov, member of the team of assistant to the President of Russia Vladislav Surkov. "The conditions of Russia for holding of the summit of heads of states of the Normandy Four have been fulfilled… The arguments of Donbass and Russia as an intermediary turned out to be more substantial, and the Ukrainian party was forced to agree and officially document the Steinmeier formula. Now, when the conditions of the Russian party are fulfilled, we can proceed to resolving the issue with the disengagement of the parties and start to prepare for the summit of the Normandy Four heads of states", - the Kremlin's mouthpiece wrote on social networks.

This mantra about the unconditional surrender of Ukraine was instantly picked up by the "official" and not really "DNR/LNR" media. "Signing of the Steinmeier formula in Minsk was a serious diplomatic victory of the "Donbass republics"…, - they quoted the words of the so-called "Minister of the DNR MFA" Natalia Nikonorova.

The "people's council of the DNR" attributed the victory over Ukraine to "diplomats" as well. The local information resources joyfully retold the words of one of the "deputies" that a "significant event for all residents of Donbass occurred. Thanks to the monumental efforts of our negotiators and mediator – the Russian Federation, all the preconditions were met at the meeting of the Contact Group in Kyiv".

Persistent imposition of fantasies of the "DNR" and "LNR" leaders Denis Pushilin and Leonid Pasechnik was top performance of the separatist journalism. All local websites, television channels, most pro-Russian channels on Telegram and other social networks issued a joint statement of the "heads of the republics", who suddenly believed in their significance. "Ukraine recognizes special right of the people of Donbass to independently determine their fate. We will decide what language to speak, what our economy will be like, how our judicial system will be formed, how our people's police will protect our citizens, and how we will integrate with Russia. This is our business. We will continue negotiations in Minsk in order to ultimately come to the full self-government and self-determination", - they made conclusions that did not follow from the discussed formula.

Go deep down… "We urge Mr. Zelensky not to dictate terms to us. When he says that elections in the Donbass will be held only after Ukraine gains control of the border, he does not understand that it is not up to him to decide when we will have elections, but to us. The Kyiv authorities will not get any control over the border", - the rulers go far beyond the Minsk agreements in their ambitions.

And, like a cherry on the cake: Pushilin/Pasechnik demanded that any changes to the law on special status be agreed with them. An ultimatum that had already drew the mouth was put forward to Volodymyr Zelensky, so to speak, on the wave of general enthusiasm. "If he wants to achieve peaceful coexistence with the "DNR" and "LNR", let him enter into direct dialogue with us", - the leaders of the puppet formations continued not literal reading of the "Steinmeier formula".

Obviously, the ears of the "big brother" are clearly sticking out because of this "policy statement". In order to somehow give him the appearance of independent position, Alexey Chesnakov joined the process of informing the residents of the occupied Donbass about all the charms of the arcane formula again.

"The statement of the "DNR" and "LNR" heads forms an important framework for the further peace process. It is important that the parameters and meanings of the special status that Donbass should receive according to the Minsk agreements and the "Steinmeier formula" are being recorded", - the Russian political scientist pretends that it was not he who had a hand in what the leaders of the "republics" voiced and all the local media made public.

For fairness' sake, it should be noted that Chesnakov failed the role of a neutral observer. After a few paragraphs, he again goes astray into the language of instruction for not very intelligent subordinates.

"It is important for the republics to immediately fix their position on elections, transfer of the border, content of the law on special status and conditions that should precede all these events. In order not to create unnecessary illusions later", - he mentors.

In this regard, sketchy information of official propagandist of the "people's militia" (illegal armed formations of the "DNR" – OstroV) Daniil Bezsonov are more truthful and sincere. He does not try to imagine that the unrecognized republics became a real player in the diplomatic arena after signing of the "Steinmeier formula". Moreover, he admits that many people in the occupied territories took the "Minsk success" of their leaders as the first step towards Russia's giving the Donbass back to Ukraine. "The media has not stopped the noise around signing of the so-called "Steinmeier formula". Ukrainian segment is bursting with anger over the surrender of Kyiv in the Donbass and threatens Zelensky with a new Maidan. But the Ukrainian segment is of little interest. I am more concerned about the Russian segment of Internet users who predicts another surrender", - Bezsonov writes.

The representative of the militants makes an attempt to reassure his fellow countrymen: allegedly, they threaten to surrender the unrecognized territory already for six years. In fact, Russia controlled all the processes taking place in CADLO and will continue to control them.

"Russia was in a difficult position. It needs to ease the sanction pressure, which, whatever one may say, affects the economy, and at the same time, not leave the Donbass. I wrote earlier about the chess game in the framework of global politics. So, we are witnessing a large and long game, in which Russia takes time and slowly bends the opponent", - Bezsonov reminds who runs the house.

"Now let us throw away emotions and try to predict further events and understand what is happening. As we can see, more than five years have passed since the signing of the first Minsk Protocol, and no one has rat on anyone. Moreover, Russia has been providing the social needs of the "republics" all this time. The ruble has been the single currency on the LDNR territory since the end of 2014. Russia recognized all the LDNR documents as legitimate on its territory. Residents of the "republics" have been granted Russian citizenship. Since the beginning of September of this year, monetary transactions are being carried out according to the invoice details of the Russian banking system. New customs terminals began to be built on the border between the "republics" and Ukraine this year. The Russian flag flutters in the center of Donetsk. Does it look like ratting that the network has been talking about for 5 years?!", - he reassures the alarmists.

Regarding the special status for the occupied Donbass, Bezsonov urges not to have any illusions about Russia's fulfillment of the Minsk agreements and the return of the CADLO under Ukrainian jurisdiction. "No matter what status Donbass gets in the Verkhovna Rada, and whatever decisions that concern us are made there, they will change nothing in reality. Our army will not lay down its arms, and the Ukrainian army will not enter our territory… No Ukrainian security forces enter the border between us and the Russian Federation", - he is sure.

Former militant of the "DNR" Yevgeniy Tinianskiy, now living in the Crimea was even more skeptical about the "diplomatic victory" of representatives of the "republics". In his publication, he simply copied the signatures put by these same representatives on their copies of the letter to Martin Sajdik. "There are no DNR and LNR. There CADO and CALO. Nikonorov and Danego personally signed up for this", - he said mischievously. 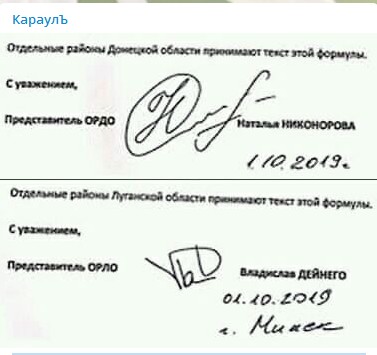 As if to answer these seemingly fair remarks, one of Novorossia's most ardent propagandists tried to prove that the "DNR/LNR" were still present in Minsk. Well, at least as a fig sign in the pocket. Allegedly, besides the text of the "formula", the representatives of the occupied territories left their autographs under a certain "dissenting opinion", which, by the way, no one asked them. So, it turns out that on this nowhere-appearing piece of paper Nikonorov and Danego boldly wrote each a three-letter word. This good news was quickly spread on social networks. "Here a source aware of the negotiations in Minsk showed an interesting document. It turns out that the DNR and LNR are still within the framework of Minsk: look at the signatures. I see, many colleagues began to rage here that the letters to the OSCE from CADO and CALO had officially left…", - the author of the "sensation" stood up for the scolded honor of the negotiators from the unrecognized pseudo-state formations. 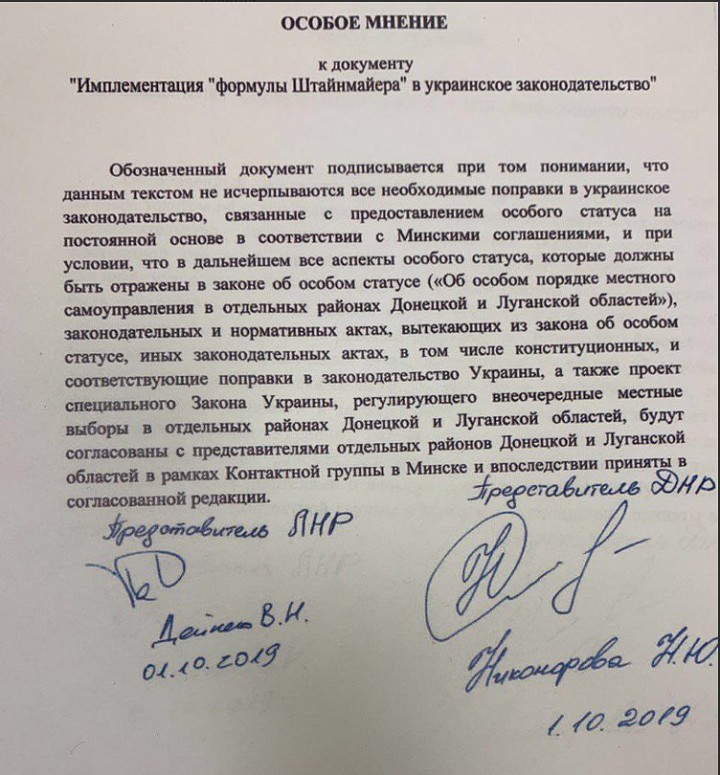 Alas, even in this seemingly rebellious demonstration of their own "dissenting opinion", a leading and directing hand appeared. If you look closely at the leaflet on which there are signatures of the "titled" representatives of the "DNRNLR", you will notice that someone marked with a pencil in advance what, how and where they should write… 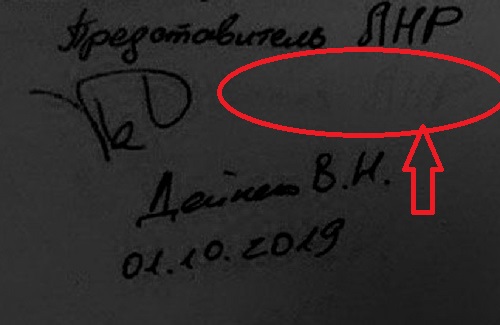 The review was prepared by Yuriy Bovkh, OstroV

Friday, September 17
"LNR" occupiers bring down fire on residential sector near church, school and kindergarten during shooting practice (VIDEO)
Occupiers of "LNR" pile lies upon lies, trying to justify barbarous shelling of Shchastia (PHOTO)
Hit the stride! 6624 new cases of COVID-19 recorded in Ukraine
Thursday results in the occupied territories of Donbas. The highlights
Thursday, September 16
Covid hospital bases in CADO are 100 percent filled with patients - "DNR Ministry of Health"
Russian-occupation troops fire at Shchastia settlement: head of local civil-military administration wounded (PHOTO)
CADO occupiers limit movement across border with Russian Federation due to large number of buses with "voters"
"DNR" occupiers boast about launch of idle mine: the mined coal will not be enough even for boiler houses and beneficiaries
More than 5700 new cases of COVID-19 recorded in Ukraine
Wednesday results in the occupied territories of Donbas. The highlights
Wednesday, September 15
Nissan Primera car exploded in Dnipro: two people died (VIDEO/PHOTO)
OSCE SMM does not confirm fake of "DNR" about act of sabotage of AFU at fuel depot in occupied Donetsk
"Do you want a massacre?" Prilepin brings 200 "DNR" militants to Nizhny Novgorod to "supervise" election to State Duma
Tuesday results in the occupied territories of Donbas. The highlights
Tuesday, September 14
By trains and with excursions: residents of CADO lured toelection to State Duma of Russia in every possible way
All news »