Serhiy Harmash: I did not see any signs at the TCG that the Russian Federation was up to a constructive dialogue. But out of negotiations…
06/18/2020 10:31
Home
Articles
Economy

Stanytsia Luhanska, May 5, 2019. Anna and Andriy Klimov show photos of the ruins of their home: at the beginning of the war, this village near Luhansk survived the airstrike, and then repeatedly came under attack from mortars and Grads. Three years ago, Klimov managed to lend $5700 to restore the tumble-down house and farm damaged by shelling. Today, they still have to pay a third of the debt, but the situation which Stanytsia Luhanska fell into this spring calls into question their very survival in this village.

Even in the most terrible period of the war, the Klimovs did not leave Stanytsia, where they, including about three hundred farms, are engaged in growing cucumbers and tomatoes in greenhouses - a local craft that was formed in the late 1980s. 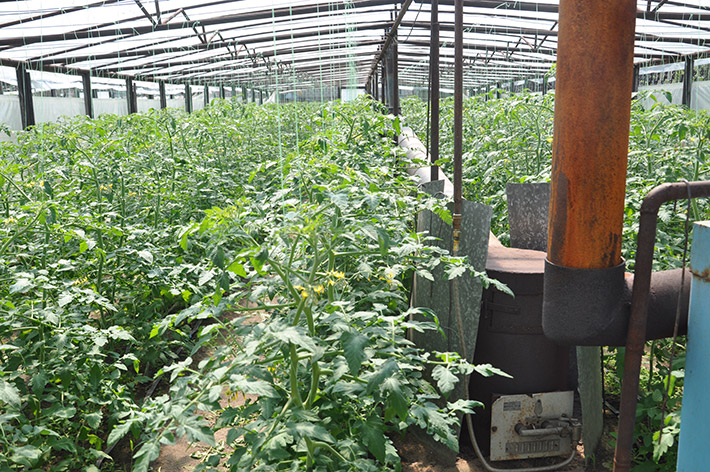 Stanytsia Luhanska was the richest suburb. Most of the local population (of which there were 15 thousand people before the war, and today there are about 4 thousand left) survives precisely thanks to greenhouses. From about the end of March, locals usually began to take out the first harvest to the Luhansk wholesale market 15 kilometers along the road from Stanytsia Luhanska.

In the period up to mid-June, trade is the most profitable because of high prices for vegetables. To get early fruits, tomatoes are usually planted back in January, cucumbers - in February. At the same time, huge money is invested in the heating of greenhouses - using gas, coal and wood: up to $1900 is required for heating 10 hundred square meters from January to April.

Stanytsia Luhanska is also the place where the only valid entry-exit checkpoint through the demarcation line in the Luhansk oblast is located. Pedestrian. People move on the destroyed bridge. Cargo is transported on wheelbarrows. The limit is 75 kilograms of cargo per one crossing.

The movement of commercial goods is governed by a rather strange document: if there is a list of prohibited goods for ordinary customs, then for checkpoints, the Ukrainian state authorities have created a list of allowed goods. Such a list, a priori, cannot include all goods that, according to simple human logic, should be easily monitored by customs officers, border guards and fiscals. In Stanytsia, for example, they say that since there are no strawberries and currants in the list, the Luhansk entrepreneurs pay a bribe of up to $0.23 per kilogram for moving these berries through the checkpoint.

The local economic miracle for individuals who are associated with the work of the checkpoint in two regions has long become a byword. However, something absolutely incredible began to happen at the Stanytsia Luhanska checkpoint this spring.

"Look: there are few people today, - Ihor Shevchenko, one of the owners of the Stanytsia greenhouses points out at the checkpoint. - Here are the wheelbarrows. There are no people around them at all. They do not move. They will stand like that until the evening..." 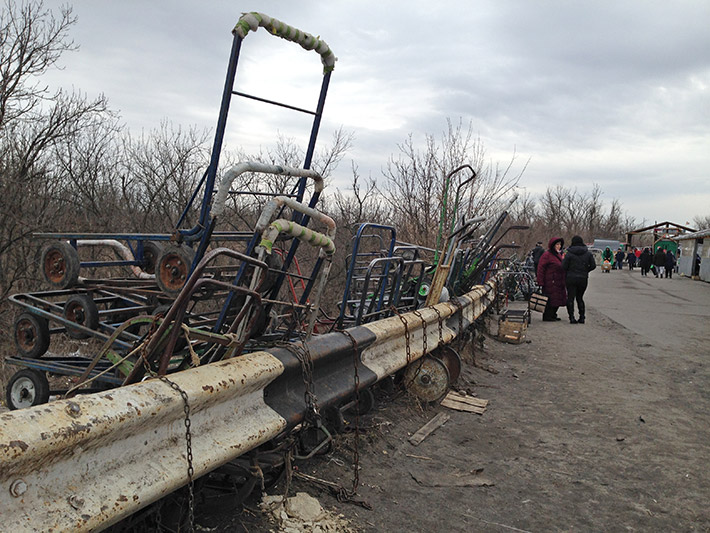 Cucumbers in the Stanytsia greenhouses appeared later than usual this year: local farmers saved fuel. Heating of greenhouses with gas due to rising prices has become completely unaffordable for them, and now they do not carry coal to Stanytsia: most of the mines and virtually everything where high-quality anthracite is being mined have remained on the uncontrolled territory of Luhansk region. Shevchenko says that the temperature in his greenhouses was at the level of 10-12 degrees this winter and in early spring, while 18-20 is considered favorable.

Therefore, the owners of the Stanytsia greenhouses received their first harvest in the second half of April this year. However, they could not transport it through the checkpoint: it turned out that the border guards had actually blocked the movement of commercial cargo through the line of demarcation. They say in Stanytsia that if earlier, up to 1.5 thousand wheelbarrows per day passed through the checkpoint, now it is no more than 70. On May 7, OstroV sent a request to the State Border Guard Service with a request to clarify the situation.

In Stanytsia Luhanska, they look at what is happening as at a new stage of sophisticated bullying, which is being regularly invented by the staff of Ukrainian services at the checkpoint. Last year, they stopped passing wheelbarrows with four wheels through the checkpoint, insisting that these local cargo vehicles could have only two or three wheels. At about the same time, entrepreneurs were banned from unloading goods from a wheelbarrow for weighing, so the permitted load rate of 75 kg was taken into account together with a 15-20 kg wheelbarrow.

For several weeks already, the Stanytsia peasants are failing in begging to either unlock their trade or at least get an explanation for the new unwritten blockade. According to them, the border guards began to check each unit of the goods, demanding to pour in front of them all the goods from the container, and then fold them back one by one. This is a very time consuming check.

Meanwhile, every day is important: the first cheap cucumbers from unheated greenhouses will appear on the market by mid-May, the wholesale price will soon fall from today's $0.57 to 0.19 and less per kilogram. Kilogram of cucumbers in Luhansk costs today up to $1.9. If early vegetables cannot be sold in Luhansk, even their export to the already densely occupied markets of other Ukrainian cities will become meaningless: transportation to Sievierodonetsk or Kharkiv takes $0.15 per kilogram. Last summer, the wholesale price of kilogram of cucumbers in Stanytsia dropped to $0.04. The unfolding situation means for the residents of the front-line settlement a complete ruin. And Stanytsia, in fact, is a showcase of Ukraine for the occupied territories of Luhansk region…

Back to the wall

"Stanytsia Luhanska turned out to be back to the wall", - Iryna Fedorenko says. She and her husband Serhiy also own greenhouses in the territory of the front-line village. "Stanytsia Luhanska is ful of vegetables", - Serhiy says. - Of course, we want to earn on them. We raised them, they are very good". 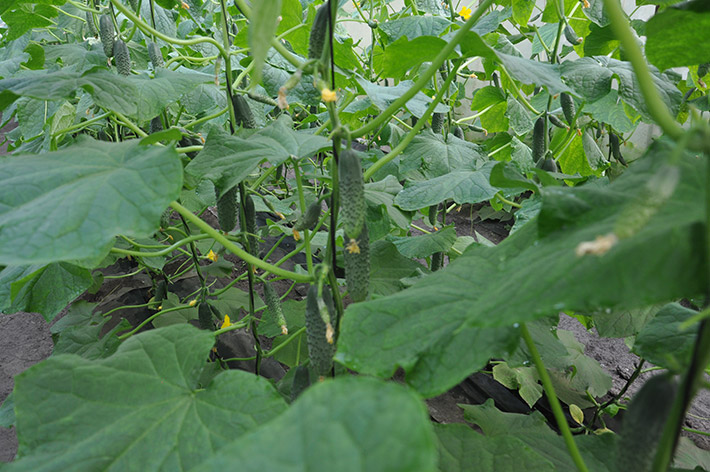 The distance from Stanytsia Luhanska to Kharkiv is 350 kilometers despite the fact that the roads in the Luhansk region are completely in holes. Even a year earlier, it was possible to get to Luhansk over the destroyed bridge in an hour. On weekends, when the flow of people through the checkpoint was reduced, the Stanytsia peasants could go to the local wholesale market two or three times. Their goods there were immediately taken away by the long-time partners from the Luhansk side.

Today, only dealers can cross the line of demarcation with the goods. Producers, who are constantly busy in their greenhouses, have no time to stand in almost not moving queues. They say in Stanytsia that places in the queue schedule for many days in advance, but even this does not guarantee the export of goods. On the night of May 4, a scuffle with the participation of a Luhansk merchant took place in the queue at the checkpoint. Someone spread a rumor in the region that dealers from the uncontrolled territory are inciting a riot in Stanytsia.

Local peasants, meanwhile, are thinking of going to a protest rally. The heat is holding in the region for several days, but unheated greenhouses are still not planted. If nothing is planted in them until the end of May, it will be too late. But under current conditions, this work guarantees only new losses for the Stanytsia residents. 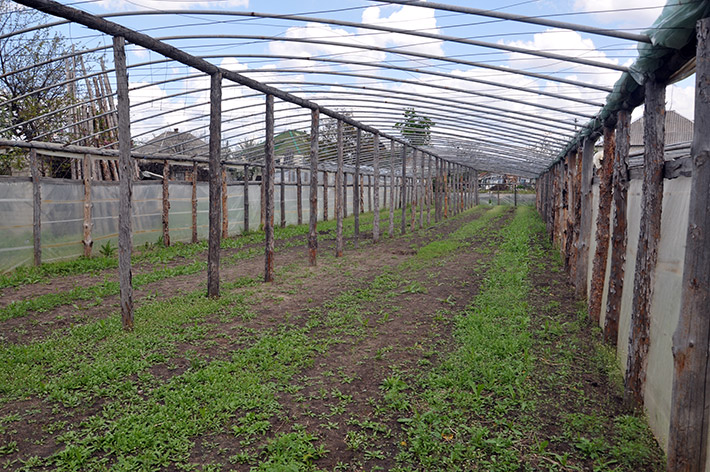 A lot of Stanytsia greenhouses have long been abandoned. Mostly elderly people left in Stanytsia Luhanska. Those who are already retired are happy. "I am 55 years old, my wife is 55 years old. We have no pension. This is just death by hunger", - Ihor Shevchenko says.

The names of the interlocutors of OstroV were changed at their request.