Reading separatist media last week, it was more interesting to observe not what the court journalists wrote, but what they did not notice. Meanwhile, several plots demanded urgent explanations from the occupation authorities…

It is hard to imagine that readers living in the territories temporarily out of control of the legitimate authorities would not be interested in learning more about Viktor Medvedchuk's so-called "peace plan". Godfather of Vladimir Putin's child transparently stated that the "DNR/LNR" leaders agreed to return their "republics" to Ukraine under the conditions set forth by the Russian president. "I am sure we will realize the peace opportunities in Donbass and stop fighting, including by using our concept plan, to which Donetsk, Luhansk and Moscow have already given preliminary consent", - Medvedchuk literally stated, having in mind giving the rebellious region the broadest autonomy to the detriment of Ukrainian sovereignty.

In other words, the Ukrainian politician directly accused Denis Pushilin and Leonid Pasechnik, who do not tire of repeating that the "DNR/LNR" are rapidly integrating into Russia, of readiness to hoist the Ukrainian flag over Donetsk and Luhansk. It would seem that this statement of Medvedchuk would have to be followed by indignant denials of the main "Novorossia natives". However, official separatist media were not just silent, but cowardly kept silent following their masters…

In this situation, information resources positioning themselves as oppositional rushed to defend the ideas of the Russian World and stigmatize the "comprador" leadership of the "republics".

"I translate - Moscow gave the go-ahead for the return of Donbass, provided that local oligarchs have preferences for business and some autonomy, in which even some fighters of the "people's militia" and officials will not be judged (far from everyone). In a loose sense - Chechnya scenario", - blogger nicknamed "the Donetsk" translated Viktor Medvedchuk's plan to language understandable to the separatists.

"Why Moscow agrees is clear - a guarantee of non-aligned status, lifting of sanctions and legalization of Crimeaisours. Why Medvedchuk and his comrades stand for this - too. This is an excellent feedbox for decades with money from the Russian Federation and EU, free economic zone and return of voters (yes, half of the pre-war, but all the same)", - he explained the interest of Russia and godfather of Putin's child in the implementation of the above scenario.

As for the consent to return to Ukraine, allegedly received from the "republics", the author makes it clear that no one asked their leaders. "As for the agreement of the LDNR - where are those who disagree? Or even those who could not agree in theory?", - he asks rhetorically, asserting that those who made all this mess in Donbass in 2014 would not agree to this "peace plan" for sure. But they were either expelled from the "republics", or simply disposed of.

"And now Medvedchuk does not get off the screens, the bots in social networks sing that it is time to go to native Ukraine, enough to eat Russia out of house and home… Public opinion is being seriously prepared seriously", - "the Donetsk" writes.

One of the "political exiles", now forgotten Pavel Gubarev put in his two cents into the wave of the Novorossia anger. "Viktor Medvedchuk stated that the "DNR" and "LNR" had given preliminary consent to his plan to resolve the conflict. This plan implies autonomy of Donbass within Ukraine. First off, who is Medvedchuk to propose and discuss such plans? What relation does Ukrainian politician have to the LDNR? What the hell the citizen of a foreign state undertakes to talk about the fate of our republics?", - the former "people's governor", whose opinions on this issue no one asks, questions from social network.

But, since he did not have the courage to accuse Moscow, which five years ago had promised strong fraternal embraces, of such treachery, Gubarev was quick to state that the godfather of Putin's child had messed something up. "What from does Medvedchuk have the LDNR consent to his plan? Does he negotiate with Pushilin and Pasechnik? Is not he taking too much upon himself, expressing his fantasies as the opinion of several million people who have already made their choice after parting with Ukraine?", - he calls into question the obvious fact that the godfather of Putin's child actually voices the point of view of the Kremlin's master.

"What Medvedchuk voiced is a lie", - he states. "We have defended our independence with deadly force and no one will decide for us what plan we should live on. If it comes to negotiations with Kyiv, our position will be tough. The negotiations will take place without your participation, Mr. Medvedchuk", - the activist of the Russian Spring does not want to believe in such scenario.

Another "hero" of the separatist revolt, creator of the terrorist Vostok Battalion Alexander Khodakovsky, on the contrary, has almost no doubt that the occupied territories are slowly but surely drifting into their "native harbor". And this harbor is not Russia. "We have people in all the key positions, adapted by Medvedchuk's ideas, and only the remnants of the fourteenth year are still stirring. They do not dare to loudly express their readiness to merge with Ukraine in love ecstasy, but on the sly, the "working negotiations" have long been in the height. This is a matter of time", - he states.

The militant and terrorist obviously does not like it. He sincerely fears that the "republics" will fall under America as a result of implementation of the "peace plan". "I understand the reasons for all the "nannies" who already want to push the problem child off themselves, but we should remember that now we do not just push Ukraine into the Donbass according to the Medvedchuk's plan, but directly into the hands of Americans… A doubtful way out, to use the mildest term", - Khodakovsky predicts.

His opinion is shared by another popular opposition author, offended by the current "DNR" authorities and driven out of the "republic". The "Donetsk aborigine" states in his Telegram channel that Denis Pushilin, "will hand over the Donbass and sign any crap without batting an eyelid".

"Every month since the appointment of Pushilin, the media space has been provoked by rumors about direct talks between the Ukrainian party and the "republics", - he assures.

To be fair, let us note that after almost a week of silence about the statements of Viktor Medvedchuk on the consent to "autonomous Donbass within Ukraine", the authorities, after all, responded. However, their reaction was more like a fig sign in a pocket – in order not to offend Moscow and once again promise their "subjects" to be united with Russia soon. It is referred to a huge banner posted in the center of occupied Donetsk with a shopworn slogan: "Our choice is Russia". 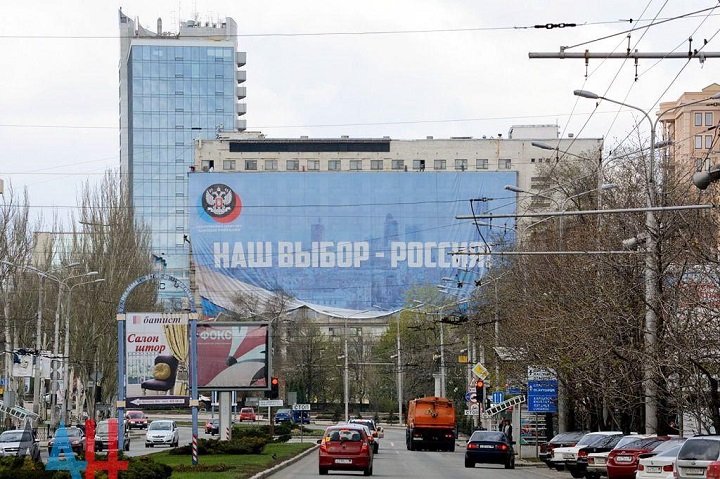 You will laugh, but a number of authors decided that after such "our answer to Chamberlain", no "peace plans" would be taken seriously. "They placed such a banner in the center of Donetsk as a response to Medvedchuk's statement about the alleged "prior consent of the LDNR to autonomy as part of Ukraine", "Our choice is Russia". A huge banner of 1500 square meters was placed in the center of Donetsk. Whazzup, Medvedchuks!", - separatist segment of social networks rejoiced.

A flutter in the bawdy house

Meanwhile, the official separatist media did not notice another small, but quite interesting event last week. It is referred to the arrest of Hubert Fayard, head of the so-called "representative office of the DNR" in the French Marseille. It would seem to be a good reason for the "Ministry of Foreign Affairs" to place a note of protest against the actions of the French authorities in all information resources. But, no! The story of the "DNR ambassador" in one of the countries of the European Union was given no publicity. Perhaps, because Mr. Hubert was detained and arrested not for his political activity, and not even for having illegally crossed the Ukrainian border to visit the occupied Donbass. He was "closed" because he… delivered prostitutes to clients.

Only Russian Spring out of all separatist media dared to talk about it with reference to one of the Russian media. "Hubert has children who need help. He lost his job some time ago and was in somewhat cramped financial conditions. At the same time, he met a Ukrainian woman... She offered to lend him a certain amount of money… In the morning after the transfer of money, the police arrived to the Fayard's house. They seized the money and detained him on charges of pimping", - the author describes an inglorious end to the career of head of the "DNR representative office" in Marseille. However, he still finds the opportunity to add a spoonful of honey to this barrel of tar. It turns out that the unemployed, short of money and living at the expense of women Frenchman "was preparing for the opening of another representative center of the "DNR" in France, which was to be held in late April".

That is what big-league politics means…

The review was prepared by Yuriy BOVKH, OstroV