Citizens of Luxembourg never learnt that their Minister for Foreign and European Affairs Jean Asselborn visited Ukraine at the end of March, where he once again condemned Russia's occupation of the Crimea and certain areas of the Donetsk and Luhansk oblasts. The fact is that none of the central newspapers of Luxembourg considered it necessary to tell about this event. Our compatriots living in this small European country read in the Ukrainian media that "Luxembourg is in solidarity with Ukraine in support of its sovereignty of territorial integrity" and… did not believe it. "I read the information about the joint press conference of the Luxembourg Foreign Minister Jean Asselborn and his Ukrainian counterpart Pavlo Klimkin. I reviewed all our local newspapers - not a word about such a press conference either yesterday or today. Where did it take place - in Luxembourg or Kyiv? And whether it passed at all?", - resident of Luxembourg, graduate of the Donetsk National University Natalia Shevchenko wrote to OstroV. The editors contacted our, as it turned out, regular reader and asked her to tell how the heart of Europe perceives Ukraine and its struggle against the Russian aggression.

The Luxembourgers are old-timers - most of them still read paper newspapers and watch television. Therefore, we are confident that the situation in the world is developing exactly as reported by local journalists. In terms of Ukraine's perception, this means that Russia has taken away the Crimea because the "referendum" took place there, and some kind of incomprehensible conflict is taking place in the Donbass.

Minister Asselborn is one of the few who is trying to convey the truth about the Russian aggression to the halcyon burghers of Luxembourg. But as it seems to me, our politicians and media are doing everything possible so that his voice not to be heard. For example, Prime Minister Dmitry Medvedev arrived in Luxembourg in early March. At the time of his visit, so to speak, out of harm's way, Asselborn was sent to Afghanistan. In contrast to his trip to Ukraine, the minister's "Afghan tour" was widely covered by the central press.

It was curious to observe how the media covered the stay of the Russian prime minister in Luxembourg. Newspaper pages were filled with photos of Medvedev against the background of Prime Minister Bettel, Grand Duke Henri. The headlines left no doubt that "Russia is a democratic country", "pragmatic cooperation" and "constructive and effective dialogue" should be developed with it. The Luxembourg politicians have repeatedly stressed how they, along with Russia, are "interested in peace and stability in Europe". 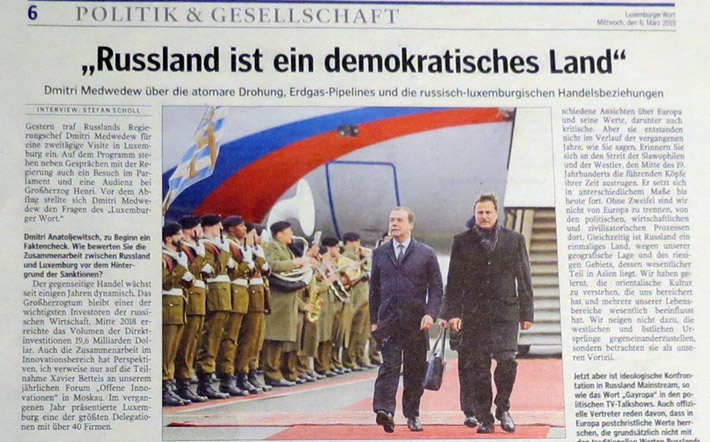 The fact that Luxembourg, as an integral part of the European Union, does not recognize the annexation of the Crimea, was mentioned only in passing. It is revealing that the Luxemburger Wort newspaper repents that it touched this topic only because of pressure from the American embassy. Not a single word was printed about the war in the Donbass.

The attempt of the non-governmental organization Ad pacem servandam (For Peace and Against War) created by us to tell the Luxembourgers what is really happening in the Donbass, so to speak, within the framework of the people's democracy, is even more revealing.

To this end, at the end of February - beginning of March 2019, we invited Ukrainian writer, Doctor of Historical Sciences Olena Stiazkina to participate in the International Book Fair in Luxembourg. In our opinion, this is a person who knows the situation in her native Donbass firsthand. We asked Olena to launch a discussion on the war in eastern Ukraine in broad circles. To this end, conferences were organized at the National Museum of the Resistance as part of the Book Salon in Luxembourg, literature readings and a number of other meetings.

The readiness to perceive the opinion of person who witnesses those tragic events is indicated by the following fact. The topic of the conference at the Resistance Museum was originally stated as: Russian-Ukrainian war 2014-2019. However, this wording of the museum's directors was frosty about and was replaced by a more neutral one - The War for the Donbass. When the official program of the conference appeared, it turned out that the term "war" had disappeared as well. The conference participants were offered to talk about some kind of "conflict in the Donbass". But, as they say, this is not about the name - without a falsely understood tolerance, Olena Stiazhkina told in detail about what is really happening in her small homeland, which she, like hundreds of thousands of other Donbass residents, was forced to leave. Naturally, journalists were invited to all the events, there were agreements on the extended interviews. Eventually, Luxemburger Wort, the country's main newspaper, canceled a scheduled interview under the pretext of staff shortages. Journalists of the second largest newspaper in Luxembourg, Tageblatt, have long communicated with the guest from Ukraine. The interview was finally published. One month in arrears…