Armored vehicles Kozak-2M1 arrived in Kramatorsk and will be handed over to the AFU as part of the celebrations in honor of the 30th anniversary of the Ukrainian army, which is celebrated today, on December 6, - Obshchezytiye reports.

Preparations for the celebrations began yesterday, December 5, - 34 armored vehicles arrived at the central square of Kramatorsk, which will be solemnly handed over to representatives of various army units today at 18.00. 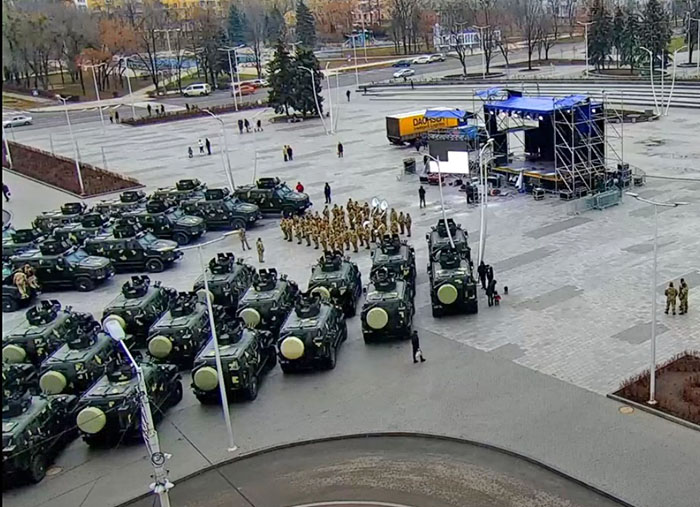 It is planned that teleconference "Kharkiv-Kyiv-Kramatorsk-Lviv-Odesa-Ozerne" will be held, which will connect the participants of the celebration: in Kramatorsk - on Peace Square, in Kharkiv - on Svoboda Square, in Odesa - a site near the harbor station, as well as the village of Ozerne of the Zhytomyr oblast, Lviv - on the square in front of the Shevchenko monument and Kyiv - on Mykhailivska square.

It is expected that President of Ukraine Volodymyr Zelensky, the leadership of the Ministry of Defence and the Armed Forces of Ukraine will take part in the live broadcast. Commander of the Joint Forces Lieutenant General Oleksandr Pavliuk will join the teleconference in Kramatorsk.

In addition to the transfer of the Kozak-2M1 AFV, the military units will be solemnly presented with honorifices and battle flags.

A concert, informal communication and a treat with army porridge and tea for all who attend the holiday are also planned.

The performance of leader of the Brutto Belarusian group Siarhei Mikhalok is expected.