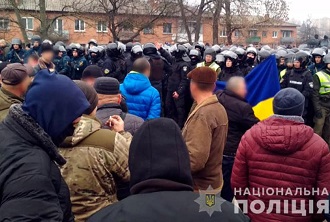 The police are trying to unlock the passage to a military sanatorium in the village of Novi Sanzhary (Poltava oblast), where they plan to deliver citizens evacuated from Chinese Wuhan. This was reported by the MIA press service.

"A group of local residents blocked the road of inter-regional significance during the action in the village of Novi Sanzhary, Poltava oblast, today at about 7 a.m. At attempt of the Poltava oblast police to unblock the carriageway, some participants of the action resisted, a short-term fight arose", - the report said.

It is noted that law enforcement officers identified 10 most aggressive activists and explained legal consequences of the illegal actions to them.

"All attempts to commit an offense will be stopped", - head of the Poltava police headquarters Ivan Vyhovskyi assured.