Ukrainian delegation to the OSCE has informed the missions of participating countries about the use of anti-personnel mines in the Donbass by the Russian armed forces, prohibited by international conventions. This happened during a meeting of the OSCE Forum for Security Co-operation on Wednesday, January 29, - Ukrinform reports.

"We express our absolute condemnation and resentment at the use of anti-personnel mines by the Russian occupation forces. These weapons of war with indiscriminate effect kill and injure mostly innocent and defenseless civilians, especially children. We emphasize that Ukraine is not a testing ground for new Russian weapons, or a place to dispose of the old ones", - Deputy Permanent Representative of Ukraine to international organizations in Vienna Igor Lossovsky stated in his speech.

The diplomat emphasized that innocent civilians "should not be hostages to such an irresponsible and ruthless policy of Russia".

"We urge the Russian party to immediately stop the supply and further use of anti-personnel mines and other types of mines and explosive devices in the temporarily occupied territories of Ukraine, as well as to remove all mines that were laid by the Russian armed forces", - Lossovsky emphasized.

The deputy head of the Ukrainian mission to the OSCE also showed presentations to foreign delegations on the use of Russian-made anti-personnel mines by the Russian occupation forces in the Donbass.

In particular, an example of the use of the MON-50 directional anti-personnel mine, which was discovered on March 21, 2016 in the area of ​​Popasna in the Luhansk oblast, was given. As the marking testifies, the mine was produced in 2003 at the Polymer plant in Chapayevsk in the Samara oblast of the Russian Federation.

The Russian armed formations will also actively use another anti-personnel mine of Russian production in the east of Ukraine - PMN-2. The Ukrainian diplomat demonstrared a photo of two such mines marked "533-37-89" and "15-99-89", which were discovered near Krasnohorivka in the Donetsk oblast on May 16, 2019. 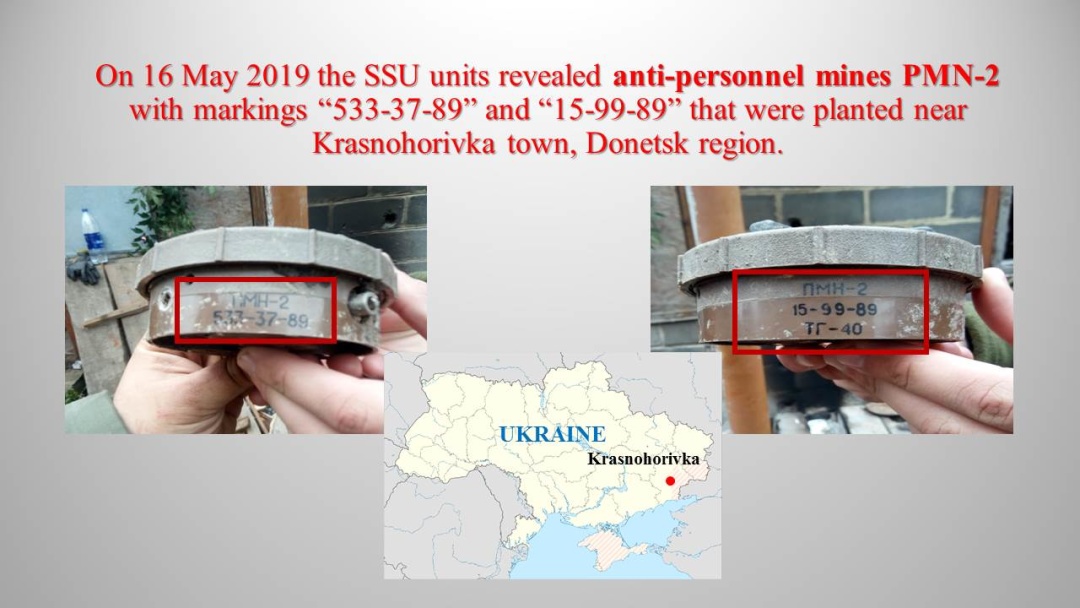 Another type of anti-personnel mines used by the Russian armed formations in the Donbass is POM-2. 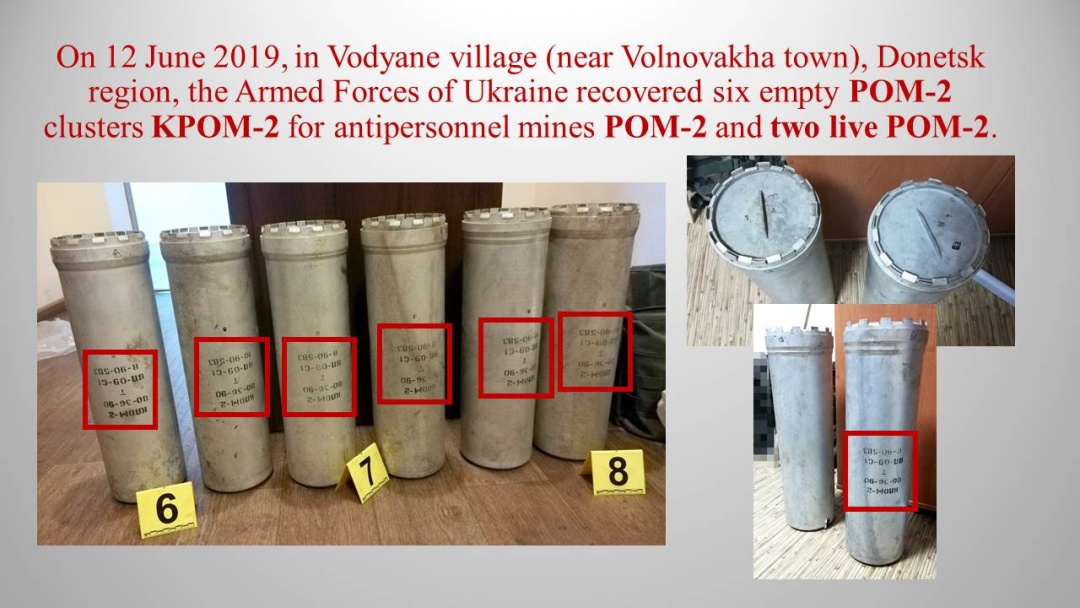 So, on June 12, 2019, military personnel of the AFU discovered 6 empty KPOM-2 clusters for POM-2 mines and two live POM-2 mines in the village of Vodiane of the Donetsk oblast.

On October 24, 2019, the Russian armed formations used the MON-2 mine to mine the AFU positions near Svitlodarsk. 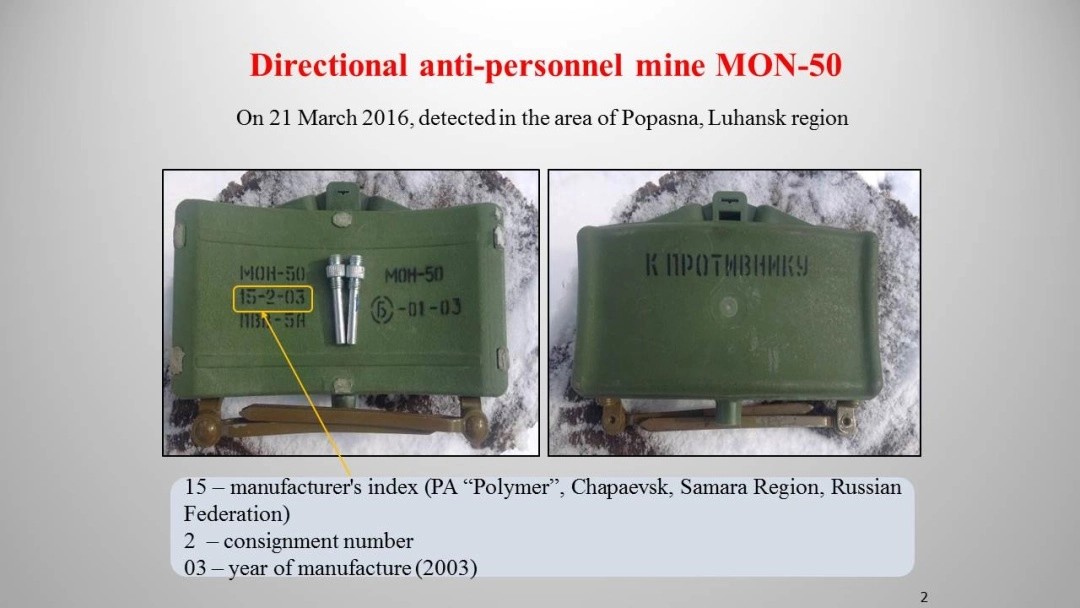 The Ukrainian diplomat informed the foreign delegations of the participating countries about specific factories in the territory of the Russian Federation that are engaged in the manufacture of PMN-2 and POM-2 anti-personnel mines. 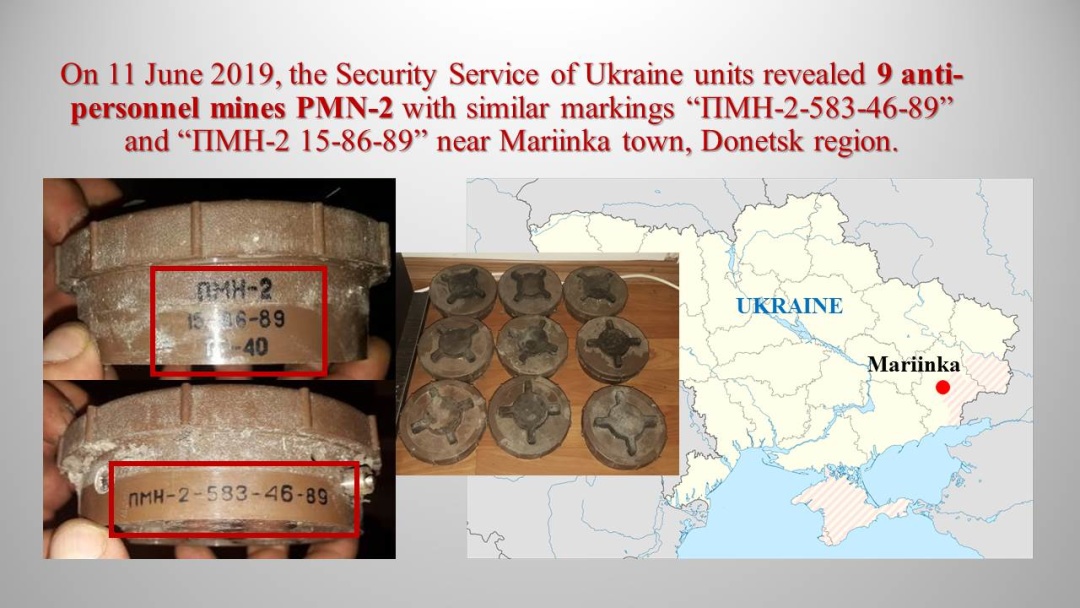 PMN-2 an" POM-2 anti-personnel mines are in Russian service. Moreover, their use is prohibited according to the Ottawa Convention or the Convention on the Prohibition of the Use, Stockpiling, Production and Transfer of Anti-Personnel Mines and on their Destruction as of December 3, 1997", - Lossovsky stated.

He recalled that Ukraine signed the Convention in 1999 and ratified it in 2005.

"In the framework of obligations stipulated by the Convention until 2011, Ukraine destroyed all PMN-2 and POM-2 anti-personnel mines under international surveillance. In turn, the Russian Federation refused to sign the convention banning anti-personnel mines and continues to use PMN-2 and POM-2 during the hostilities", - the Ukrainian diplomat stated.

He added that the OSCE SMM reported the detection of anti-personnel mines prohibited by international conventions in the temporarily occupied territory of eastern Ukraine three times only in January 2020.