The organizers and participants of the fake "elections" in CADLO will bear criminal responsibility. This was stated by Secretary of the National Security and Defense Council of Ukraine Oleksandr Turchynov, - the press service of the department reports.

"The law-enforcement bodies of Ukraine will reveal all the organizers and participants of these pseudo-elections, and they will inevitably be brought to criminal responsibility", - he said.

According to Turchynov, these criminal acts, condemned by all the leading countries of the world, "are a gross violation and full discredit of the Minsk agreements, as well as an attempt by the Russian aggressor to strengthen its control over the occupied territory".

Turchynov recalled that according to the legislation of Ukraine, participation in the organization and holding of fake elections in the temporarily occupied territory of Donetsk and Luhansk oblasts falls within several articles of the Criminal Code of Ukraine.

Turchynov also emphasized that the organizers of illegitimate elections and those participating in them can also be brought to criminal responsibility under other articles providing for long terms of imprisonment and confiscation of property.

"I want to assure all those, involved in the holding of these criminal events, in the groundlessness of hopes to avoid the responsibility for your actions, I warn that you have only one chance to refuse from the participating in the crime", - he said, concluding that "the temporarily occupied Donbass and Crimea were and will be an integral part of Ukraine".

The statement of O.Turchynov does not specify whether residents of the occupied territories, who are forced to take part in the illegal elections under administrative pressures, are subject to criminal liability. At the same time, the category of voters belongs to the decisive election participants in the Ukrainian legislation.

As previously reported, users in social networks reported that posters about responsibility for participation in the pseudo-election of the "LNR" were placed on the territory of Luhansk region controlled by Ukraine. In particular, the users have published photos of posters at the Stanytsia Luhanska checkpoint. "SBU warns: participation in the elections of CALO is high treason. Everyone will be discovered", - the inscription said. Posters with similar content were placed in the premises of the Pension Fund in Popasna of the Luhansk oblast. 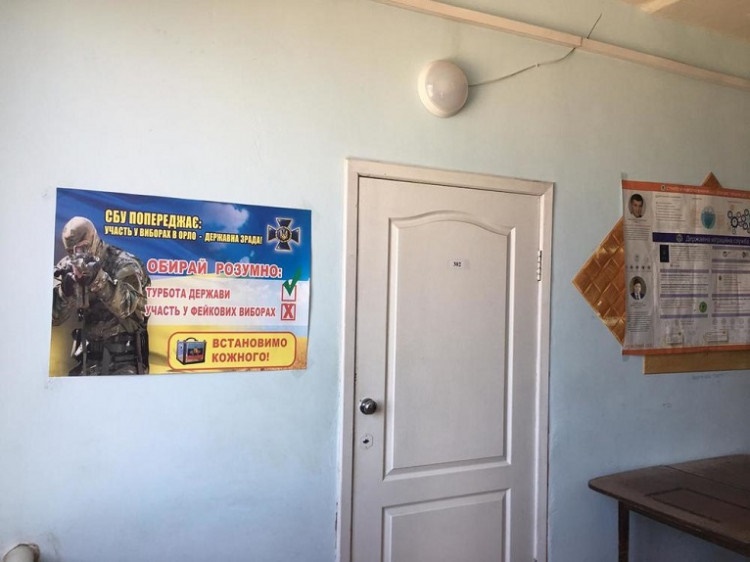