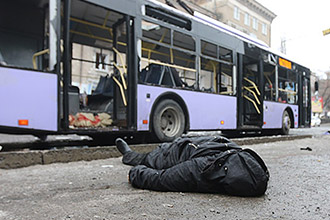 Ukrainian journalist Denys Kazansky has found and published a video blog where former militant of the "DNR" Denis Lotov, who lives in Russia today, who fought against Ukraine in 2014, reports the real causes of the January 22, 2015 tragedy.

On that day, 8 people were killed by a mortar shell in a trolleybus on Bosse Street in Donetsk. The propaganda media blamed a bloody crime on the AFU, then on the Ukrainian sabotage-reconnaissance group hiding in the garbage truck.

According to Lotov, Cossacks from the Ataman Safonenko group, who fought with Zakharchenko's Oplot, were shooting.

"Someone grabbed something. The Cossacks came to punish. So, they fired from mortar at the Oplot's base, which is near. But they are bad shooters, so they missed and hit the stop with this trolleybus. But of course, no one will tell such things… So the story as the Ukes killed civilians was overblown out of this immediately", - Lotov admits.

According to Kazansky, Lotov is a reliable source – he is invited to the airs, meetings with Russian writers and politicians in Russia, so his revelation cannot be bogus stories from the Ukrainian party.

"Who would have thought that the real killers of civilian population were not the Ukrainian military and not even Pravy Sector activists, but "fighters for the Russian language"! What a surprise. The more time passes since the beginning of the war, the more truth we learn about the events of 2014-15. We were told so many horrors four years ago about the atrocities of the Ukrainian military. But over the years, real facts come to the surface. It gradually turns out that all the most terrible crimes that were attributed to the AFU, in fact, were committed by the "liberators" themselves.

Such case was with the "wandering mortars" in Luhansk, which were first attributed to the treacherous Ukrainian sabotage-reconnaissance groups, while Valeriy Bolotov did not admit before his death that people of Plotnitsky actually shelled Luhansk (later, the arrested fighters from his Zarya Battalion confirmed this as well). The same is now with the shelling of the stop in Donetsk in January 2015.

Can you imagine how many more such discoveries are waiting for us in the future? Have no doubt - there will be surprises", - Kazansky wrote.