The issue of disbursement of the next tranche to Ukraine is absent from the work plan of the Board of Directors of the International Monetary Fund, which is written until April 7. This is stated in the IMF materials, - Economichna Pravda reports.

According to the information, consultations with the authorities of Nigeria and the Netherlands are planned for March 29. A discussion of cooperation with the representatives of San Marino and Benin - at the beginning of April. At the same time, there is no Ukrainian issue in the work plan of the IMF Board of Directors. 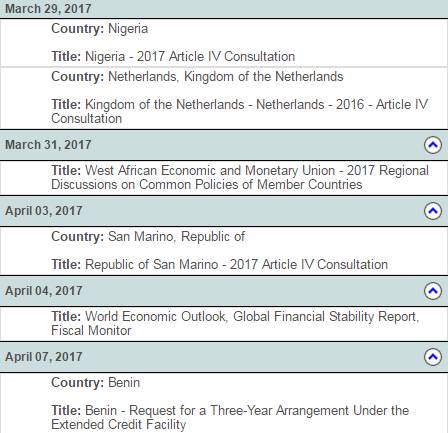 As previously reported, the IMF Board of Directors postponed the planned for Monday discussion of the completion of the third re-examination of expanded financing program for Ukraine. According to the Ministry of Finance, the rescheduling of the meeting is caused solely by the need to clarify the calculation of the economic consequences of the measures taken by Ukraine in response to the blockade and the seizure of Ukrainian enterprises in the uncontrolled territories of the Donetsk and Luhansk oblasts, as well as in connection with the recognition by the Russian party of the documents issued on these territories. The National Bank has already passed the specified macroeconomic measures of the budget to the International Monetary Fund in order to accelerate the disbursement of the next tranche to Ukraine.

Tuesday, May 24
Occupation corps of russian federation is not enough for gauleiter of Kherson region – traitor asks for "russian military base"
Monday, May 23
Authorities of russian federation do not intend to change Medvedchuk for defenders of Mariupol, withdrawn from Azovstal
Russian federation states that it is Ukraine that refuses to negotiate - "the ball is on its side"
Sunday, May 22
Deputies extend martial law and general mobilization in Ukraine for three months
AFU destroy Tyulpan self-propelled heavy mortar of russian federation, confirming defeat of equipment of this class for first time in history (VIDEO)
Attempt to liquidate self-appointed "mayor" in occupied Enerhodar - social networks (PHOTO)
Saturday, May 21
Zelensky couple tells how they met russian invasion in morning of February 24
Largest research center in field of aviation and astronautics is on fire in russia
VIDEOFACT: "DNR" riflemen control deportation of Mariupol residents: it will not be possible to avoid
232 children have died in Ukraine since beginning of war, more than 662 have suffered – Office of Prosecutor General
Kievan Rus’ was "cancelled" in schools of russian federation and Kyiv was simply captured
Friday, May 20
Russian missile hits House of Culture in Kharkiv region. Seven people were injured, including child
In Sievierodonetsk, rashists attacked school where people were hiding. There are three dead (PHOTO)
Defenders of Azovstal convoyed to torture jails - media
Firefighters protest against kidnapping of their chief by occupiers in Enerhodar (PHOTO)
All news »