He said that the General Prosecutor's Office of the RF sent him a letter in which he stated that Ukraine had no right to judge Ukrainian prosecutors of the Crimea, who sided with the invaders, for treason as, according to "decree" signed by Viktor Yanukovych in Rostov on March 21st, they were no longer citizens of Ukraine.

"Yesterday I received a letter from the Russian GPO. They are very concerned about our criminal prosecution of the Crimean prosecutors for treason. They inform me that Yanukovych signed a decree on the abandonment of nationality of Ukraine for 590 people prosecutorial staff in March 2014 in Rostov-on-Don," – said Lutsenko.

"I have to disappoint the GPO of the RF and the tricksters – except for the signature, there should be also a state seal on the Decree of the President of Ukraine. Yanukovach forgot to steal it, fortunately," - summed up Lutsenko.

As previously reported, Viktor Yanukovych’s presidential powers were discontinued by the Verkhovna Rada on February 22nd, 2014, respectively, all the decrees signed by him later are not legitimate. 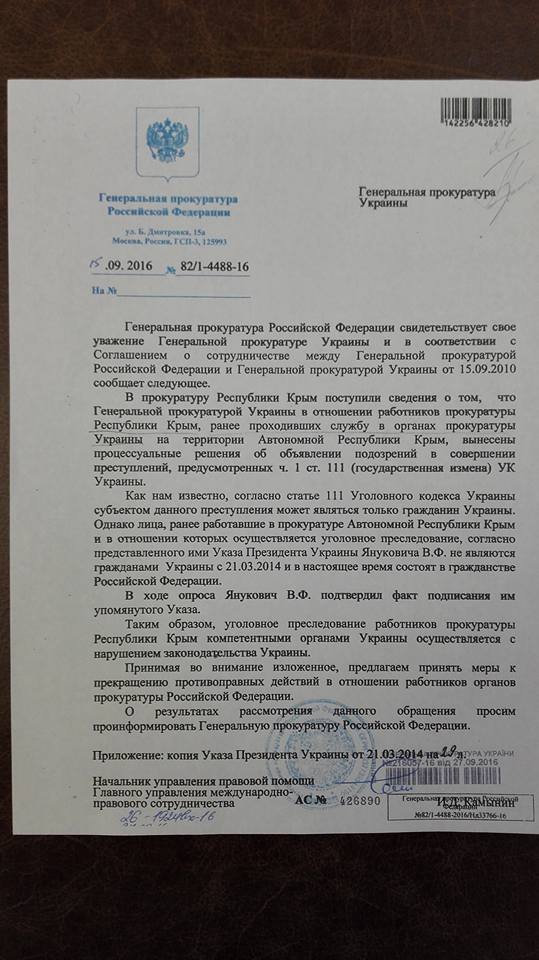