The message with the words "Crimean bridge will link the peninsula with Russia and the Crimea will finally become ours" disappeared from Twitter of the Prime Minister Dmitry Medvedev. It is reported by Medusa.

The publication notes that tweet with photos of the visit of Medvedev and President Vladimir Putin to the Crimea was published at 19:39 Moscow time on September 15th (a copy of the Google cache). At 22:05 the message was deleted. Instead, he had a new one with the same pictures and the text "Crimean bridge linking the peninsula with the rest of the country". 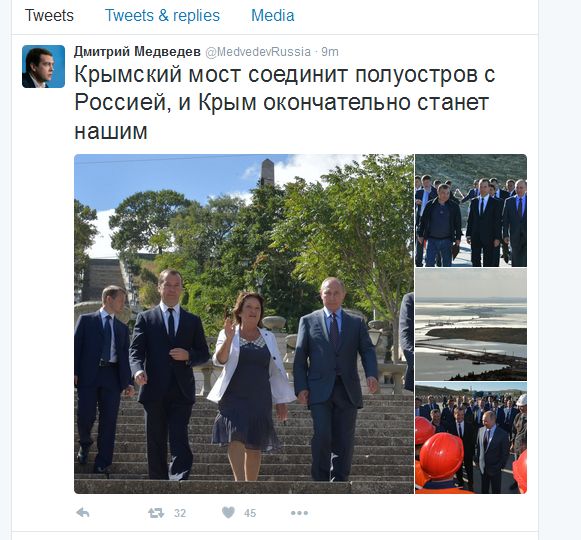 Some users also reported in the evening on September 15th that they were banned in Dmitry Medvedev's account. In particular, Georgiy Alburov – employee of the Fund for the Fight against Corruption that published the investigation of the "secret country house" belonging to the Prime Minister in the Ivanovo region that day. Alburov as other users blocked by Medvedev wrote on Twitter about this country house.