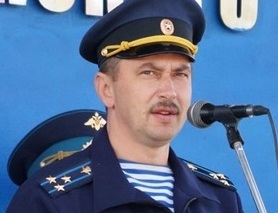 Colonel of the Russian Armed Forces Dmitry Bondarev was prematurely withdrawn from the occupied territories of Donbass for the fact that in response to comments of the Moscow commission, he cussed out top leadersof the Armed Forces and sang song made up by Kharkov football ulras "Putin kh** lo ". It is stated in the message MID of the MDU on Facebook.

Before his arrival in the territory of Ukraine, Bondarev held the position of Commander of the 51st Parachute Regiment of the Airborne Division (Tula) of the Russian Armed Forces. He led the 9th separate motorized infantry regiment in Novoazovsk in Donbass occupied by militants.

Moscow Commission remarked upon the level of combat training and morale of the personnel of the unit entrusted to him. In response, the Colonel "cussed out leaders of the Russian Armed Forces and performed the famous song made up by Kharkov ultras and offered Russian leaders to fight against fellows in the east of Ukraine by themselves", - reported the intelligence.