The holiday continues! The level of COVID-19 diseases in Donetsk is growing despite the "mass vaccination"
09/16/2021 10:17
Home
Articles
Economy

Serhiy Pavlov knocks on the table three times: "If this engine stops - we sink the mine in two days". In the small, more than modestly furnished office of the Selydove branch of the Independent Trade Union of Miners, its head says that two of the four mines of the state-owned enterprise are left with a single working pump.

"The water comes in a thousand cubic meters. The pumps work in emergency mode, the engines overheat. There should be scheduled replacements, which we do not have. There is no money", - Pavlov states.

There are four operating mines in Selidovvuhillia. One of them, the Kurakhove mine, is depleting its last developed reserves and is subject to closure. The other one, 1-3 Novohrodivska, has not been producing its own coal for some time and only serves a private enterprise with the same name, which extracts coal from the banks of the mine leased to it.

The other two, Ukraine and especially Kotliarevska mine, are considered promising. Ukraine, however, produced less than a thousand tons per month until recently, and stopped production in July altogether: the mine ran out of prepared reserves, the driving was not invested in for years.

The Selidovvuhillia mines have virtually no equipment left as well. The already flooded Ukraine and Kurakhove do not even have standby pumps.

"Our water is quite aggressive", - another trade union leader, head of the Selydove branch of the Trade Union of Coal Industry Workers Volodymyr Babich says. "In Selydove, water from the closed mine named after Korotchenko once flowed by gravity down the street and ate the asphalt away. Literally". 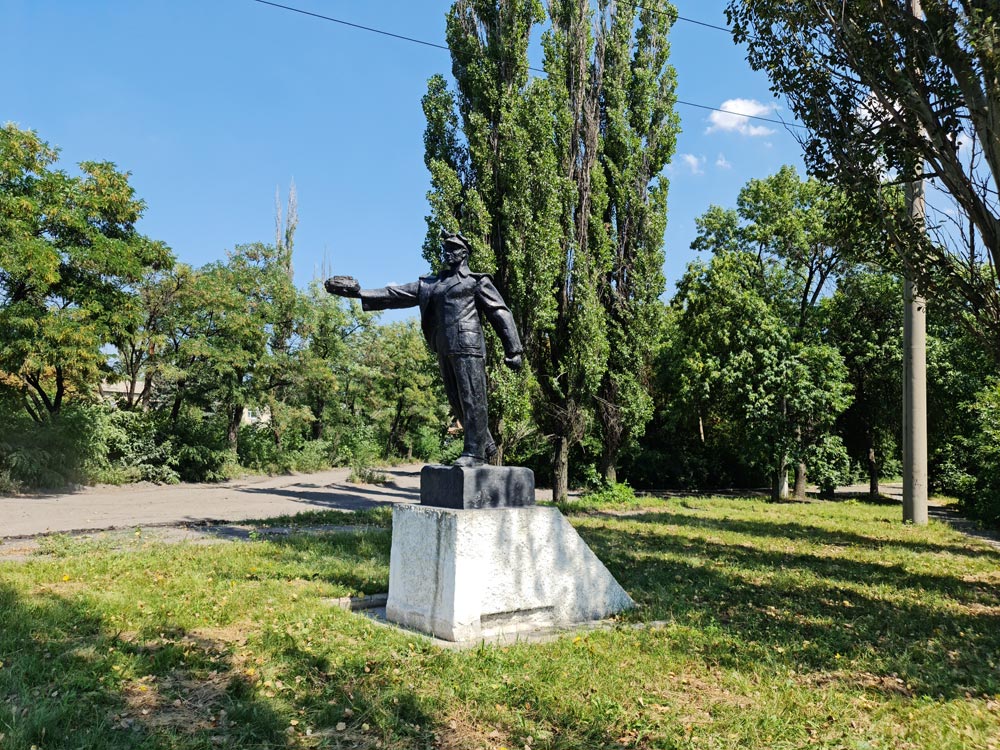 At the entrance to the territory of the Korotchenko mine

Vitaliy Neshyn assigns the route: a sports school in Ukrainsk, where he continues to work as a boxing coach, a city cemetery, a museum of the Ukraine mine and the territory of two closed mines within the boundaries of the Selydove territorial community, which now includes Ukrainsk.

Neshyn is head of the Selydove amalgamated territorial community, elected in the fall of 2020 from Opposition Platform - For Life. In May 2021, City Council deputies from Servant of the People and several other smaller parliamentary parties united to dismiss him. Neshyn is challenging the resignation in court, but it does not begin to consider the issue on the merits.

Retired miner Hryhoriy Borovin is already waiting for the meeting at school with a heap of papers, the contents of which he begins to retell almost literally: the numbers of the five-year plans, the names of the sections' heads and the size of the production records. "Ukraine mine is 685 kilometers of mine workings. This is like from here to Kyiv", - he says as if by the way. 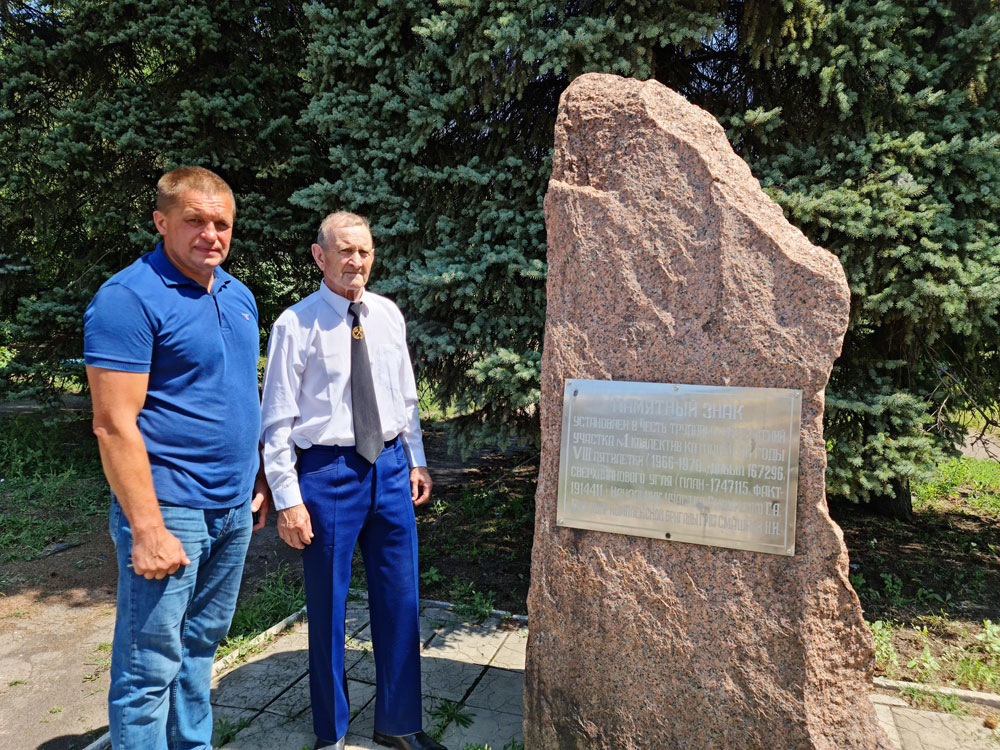 Ukrainsk, for which the Ukraine mine is a city-forming enterprise, is stirring up rumors about the government's plans to close the mine. However, there is other information: that Ukraine had a lucky ticket to be included in the government-planned energy holding on the basis of the Centrenergo state-owned energy company, which will subsequently be put up for privatization. The mines included in the holding, by and large, will become the few state-owned mines that will receive guaranteed sales and insurance against closure - at least for ten years.

Local miners, however, are plagued by doubts: Ukraine needs investments to continue its work. Not so much compared to many other mines, around $28 million, Babich says. He also adds: "This is not very much for the state, but no one wants to invest this money".

Borovin, who appeared to be at the Ukraine mine as a result of assignment in 1963 and worked there until 2012, having retired from the post of deputy production director, repeats that "the population will not allow this mine to be closed. People gave their lives for it. 35 people died in the 2002 accident: the youngest was 18 and the oldest - 76 years old. Six people remained there forever". It means that they have never been raised to the surface as a result of an emergency situation.

The government has never announced specific plans for the rehabilitation and development of the future holding. The rapidly deteriorating condition of state-owned mines in recent years, multiplied by uncertainty, squeezes the atmosphere in mining towns, provoking new outbursts of indignation.

"There are less than one million tons in warehouses of Ukraine now, and there should be three", - Serhiy Pavlov of the Independent Trade Union of Miners of Ukraine says. - That is, we do not have time to load the warehouses for the winter, because the mines do not provide coal. Coal will again be supplied by Russia, and we will again pay salaries and pensions to the Russian miners. I think hunger strikes will resume in September. We are drowning and, probably, will soon touch the bottom, and nothing can save us".

"Somehow to one side"

In 2012, part of the banks of one of the most promising state-owned mines, 1-3 Novohrodivska, was rented by a private structure, which was associated with Oleksandr Yanukovych, the son of the then president. The deal was legally dubious, but the litigation that followed the overthrow of Yanukovych led to nothing: the Supreme Court put an end to them just at the beginning of 2021, having recognized the rights of the lessee.

The lessee has changed several times since then. Now the enterprise that develops the Novohrodivska banks belongs to Maksym Yefimov, the Verkhovna Rada deputy, who was a member of the political party of President Petro Poroshenko at the time of gaining control over the enterprise in 2018.

The history of Novohrodivska is similar to the one that fell on the Krasnolymanska mine in neighboring Myrnohrad. It is difficult to carry out production on state-owned banks without intersecting with "private" ones. Accordingly, the interests of the parties intersect, sometimes weirdly. It is emblematic that the former director of the 1-3 Novohrodivska state-owned enterprise became new acting director of the Krasnolymanska state-owned enterprise in July 2021. It is interesting to know what the Ministry of Energy wanted to demonstrate to the miners in this way.

There was no conflict at the Novohrodivska mine between the management of the state-owned enterprise and the "investor". The private enterprise is really investing in production, people at the mine say: "1-3 Novohrodivska is the only one in the conditional framework of Selydivvuhillia, where production is carried out with new high-quality equipment.

But this is on leased banks. The state-owned mine of the same name, which has its own prepared face, does not mine, in fact, due to the lack of equipment. Its workers are forced to serve solely private enterprise - there were protest campaigns of miners in the region in the spring in connection with the non-payment of salaries by Yefimov's structure. The regional civil-military administration explains that the enterprise had difficulties with the sale of mined coal. The debts have not yet been paid off.

The Ukraine and Kotliarevska mines are also in trouble with "public-private partnership". Both mines were built with their own washhouses. Both factories were privatized and are now believed to belong to Vitaliy Kropachev, the very same coal baron during Poroshenko's presidency, who also controls Krasnolymanska. Both of them do not work or no longer accept coal from the state-owned mines since 2019. "So as not to load the coal on their conveyor, we throw it off somehow to one side. These are additional costs, both material and human resources", - Volodymyr Babich from the Trade Union of Coal Industry Workers notes.

Production at the Kotliarevska mine has stalled as well. Once the holding management bought a Chinese combined machine for this mine. The equipment turned out to be either of poor quality, or unsuitable for work on the Selydove banks. It is not serviced in Ukraine - the combined machine was taken to China for repairs. "We have not had subsidies for development since 2013-2014", - Serhiy Pavlov says. "All of the Selydivvuhillia mines are now working with bedes".

Mines across the region are complaining about new regulations requiring 80 percent of coal sales to be spent on wages. Probably, the Cabinet of Ministers found a solution to the problem of increasingly frequent miners' protest campaigns in this way, but the miners themselves consider it temporary, to put it mildly.

Plain and simple: the more coal a mine produces, the lower the cost per ton, the more it earns. In the absence of investment in development, production will continue to fall, while debts - and the penalties charged on them - will rise. This is a common problem for Ukrainian mines. "Mining miserable amount and sending everything to salaries, we will not have a penny for development. That is, we will work for another month or two, pay off the workers and board the entrance control post up", - Serhiy Pavlov says.

The government's plans for a "fair transformation" of coal regions are questioned in Selydove and Ukrainsk. Everyone has before his/her eyes an example of already closed enterprises - territories in varying degrees of desolation. And an example of all the other announced reforms in the coal industry - there have already been more than a dozen of them for more than 30 years. In a best-case scenario, they led to nothing. 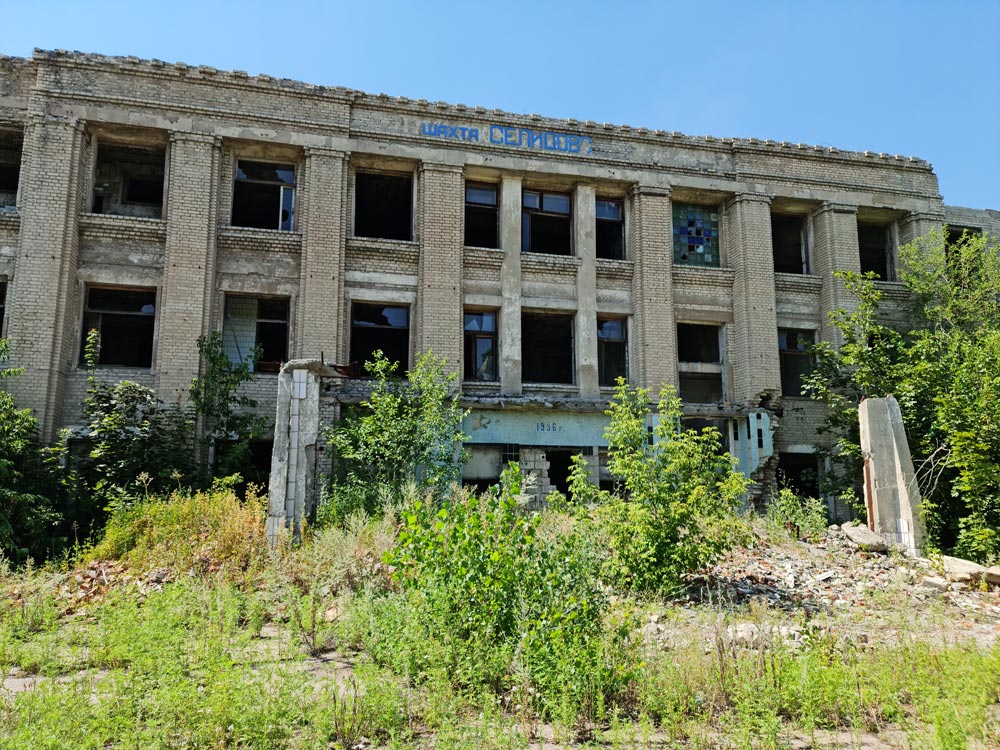 The territory of the closed Selydove mine

The closure of mines is recognized by many as inevitable. However, this refers to gradual process both in the government rhetoric and in the local communities. In reality, the degradation is so rapid that even the best state-owned mines will stop mining in the country in a matter of years, or even months.

The trade unions considered in 2017 that restarting coal mining in Ukraine required not so large sums for the state: $444 million each for a period of two years, so that promising mines could establish unsubsidized work. And of course, the government is expected to put things in the ownership structure of the industry's enterprises in order.

Volodymyr Babich says that just a few days ago, the miners once again met with Energy Minister Herman Halushchenko. The minister told about working out draft law to write off the debts of coal enterprises to state funds, which accumulated when the mines were not paid for the supplied coal. Halushchenko also promised to seek an increase of deductions for the coal industry in the 2022 state budget, including for the modernization of promising mines. 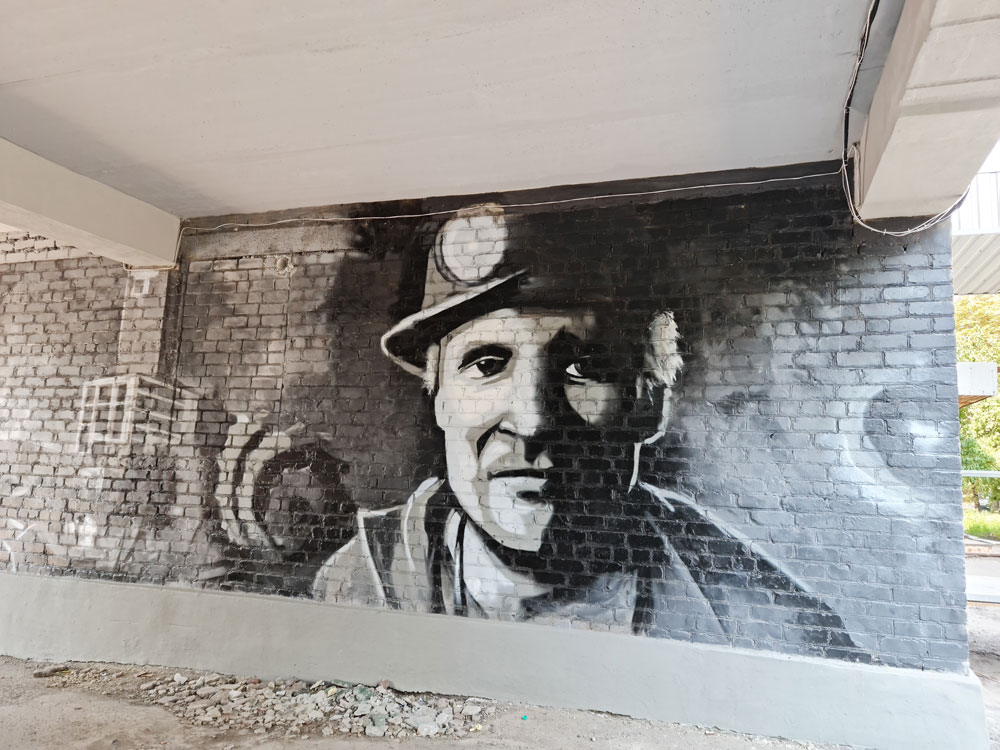 Graffiti on the building of the Selydivvuhillia state-owned enterprise

This is not about creating the illusion of survival for an industry that has no future. This is about the very smooth and just transition that will allow entire cities, still dependent on both budget revenues from mines and coal heating, to survive the overdue transformation, and the state - to preserve energy independence for the period of this green transformation.

The main thing is about preserving the human dignity of those employed in the most difficult and dangerous, and once the most important working profession, tribute to all those who remained there forever.