Replacement of the manager of the grabbed industrial assets on the territory of CADLO gave no results. Owner of the Hirnyk holding Igor Andreev was unable to resume the work of metallurgical plants in the expected time frame and in the required volume.

This has nothing to do with the managerial qualities of the Donetsk oligarch. On the one hand, he inherited a burdensome legacy from the previous manager - Vneshtorgservis (VTS) company. On the other hand, it is difficult to organize the work of anything at all in "DNR".

As a result, local enterprises are returning to the pre-revolutionary volumes of iron smelting.

Even preserving the production of finished rolled steel turned out to be an unbearable economic task for the "DNR" leadership turned - which, in fact, no one was going to solve.

Nevertheless, the resumption of the blast furnace operation at the Donetsk Metallurgical Plant (DMP) from April 27 was reported by the "DNR" propaganda media in as a major success.

The launch of the "industrial development program" at the end of April was presented with great fanfare, according to which 4 enterprises will be engaged in iron smelting.

The transition to iron smelting for them is as if the South Korean concern Samsung has stopped making mobile phones and televisions, having started to produce nails and zinc-plated buckets.

Fugitive Kharkiv oligarch Serhiy Kurchenko, together with his VTS (registered in unrecognized South Ossetia), entered the industrial enterprises of CADLO in the spring of 2017 - after the separatists finally "seized" them from the previous owners.

S.Kurchenko and his team have successfully finished off these assets аor 3.5 years: they did not pay wages to the workers, having forced everyone who could to resign and leave. In addition, nothing was invested in the repair of equipment under VTS and it came into an emergency condition. Finally, huge debts to suppliers were accumulated.

First of all, this is the debt for the supply of iron ore to the Severstal group of sanctioned Russian oligarch Alexei Mordashov.

It is not for nothing that even on cameras of the local propaganda TV, representatives of the new management of DMP refrain from forecasts for the future work of the enterprise, stressing that everything will depend on the availability of raw materials.

This means that Severstal has taken a position "let's see the color of your money first" and does not want to further sponsor the work of the DMP gratuitously, as under S.Kurchenko.

It is also clear that I.Andreev does not have enough money to immediately close the debts accumulated by his predecessor for 3.5 years.

Let us recall that Hirnyk replaced VTS in November 2020, and the "DNR" leadership expected the resumption of full-fledged work of the iron and steel works from January of this year. But this did not happen for the above reasons.

It was possible to launch blast furnace No.1 at the DMP only from April 27. At the same time, as the "DNR head" D.Pushilin specified, it was planned to stop it for repairs immediately after the launch of blast furnace No.2.

This means that despite the putting into operation, blast furnace No.1 is in an unsatisfactory technical condition (it cannot be otherways - since, according to the testimony of the company's employees, equipment repairs under S.Kurchenko were not carried out at all). 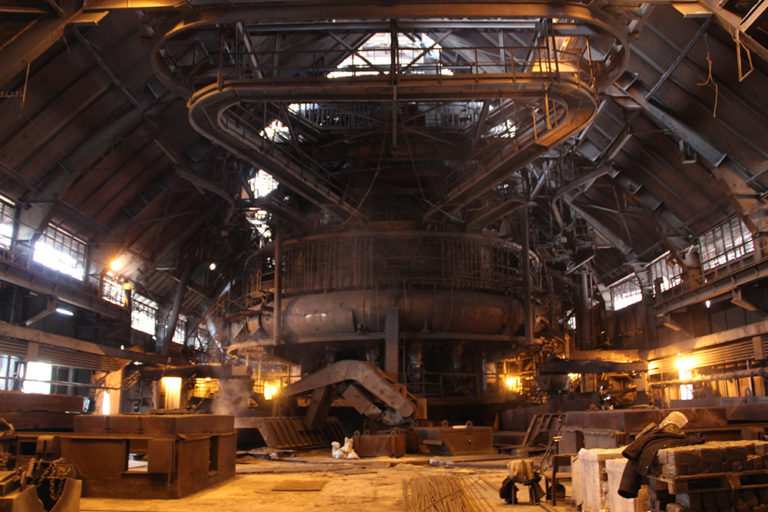 The "achievements" of the Donetsk metallurgy under I.Andreev are so "great" that the leadership of the "DNR" is even embarrassed to report them officially.

Although, D.Pushilin clarified in an interview with journalists that the DMP received 72 thousand tons of steel feed in January-April. Obviously, this is referred to the work of the arc-furnace shop. Not ore, but scrap metal is used for its furnaces…

For comparison: the Donetsk Electrometallurgical Plant (DEMP, formerly - Istil) produced 348 thousand tons of steel feed in the pre-crisis 2008 in January-April and 205 thousand tons in the crisis 2009 for the same period.

That is, the volume of steel smelting at the DEMP is now 3-5(!) times lower than the previous figures.

The "Ministry of Industry and Trade of the DNR", which came up with a "program for the development of industry", has even more enchanting "achievements".

It provides for the partial resumption of the work of the Horlivka Machine-Building Plant, the Zuyivka Energy-Mechanical Plant, the Donmetexpo Donetsk plant and Dongormash.

The launch concerns only the capacities of foundries at these enterprises. Local craftsmen reconfigured the electric arc furnaces available there for the smelting of pig iron, which they intend to sell to Turkey in the future.

However, there will certainly be problems with sales. The fact is that electric arc furnaces account for only 1-2% of the world's pig iron production. Because this method of obtaining is quitet expensive in comparison with traditional smelting in blast furnaces. That is, this cast iron will not withstand competition in the market.

Especially if prices for iron ore (and pig iron then) go down, as predicted by the Australian government.

The Ministry of Finance of this country, which is the world's largest exporter of iron ore, expects the price to fall to $55/t in 2022 compared to the current $220/t.

And of course, the production volume…

As already noted, Dongormash, the Horlivka Machine-Building Plant and the Zuyivka Energy-Mechanical Plant previously produced complex engineering products. Donmetexpo is an enterprise created in 2018 on the basis of the foundry of an aluminum extrusion plant in Donetsk. That is, all four have never melted pig iron - especially on an industrial scale like the DMP.

Therefore, the declared production volumes within the framework of the "industrial development program" are, to put it mildly, very modest.

At Donmetexpo, in particular, it is planned to smelt 1200 tons of pig iron over a month at the first stage, then reach full capacity: up to 3000 tons. That is, 36 thousand tons of pig iron a year. Is this a lot or a little?

The Donetskstal plant smelted 1.212 million tons of pig iron in the pre-crisis 2011. This is if we compare the work of the foundry shop of the aluminum extrusion plant and a real modern metallurgical plant.

But if we turn to history, the figures of Donmetexpo and machine plants are quite presentable So, 6.2 thousand tons of pig iron were obtained at the DMP in 1872 (the first year of work) under the leadership of its first managing director John Hughes.

Compared to this result of a century and a half ago, the production plans of the "DNR Ministry of Industry and Trade" look quite good.

Truly speaking, already in 1900, iron smelting at the Donbas factories reached 2.829 million tons. But, as D.Pushilin stated at the DMP on May 1 of this year, "the Donbas always pursues its goals".

Therefore, we can hope that in 20-30 years, the metallurgists of the "DNR" will reach the indicators of 1900.

The plans to start smelting pig iron contradict the previous promises of the "DNR Ministry of Industry and Trade" to make 2021 the year of "an export breakthrough for the machine-building industry".

Such intentions were voiced at the end of December 2020 by head of the department V.Ruschak. At the same time, it was noted that the same Dongormash already exports 90% of its production - of course, to Russia.

However, the volume of exports can hardly be called otherwise than deplorable. The company's revenue from foreign sales in 2020 amounted to $2.07 million at the then exchange rate.

This means that all revenue was at $2.3 million. For comparison. The income of Dongormash in the pre-crisis 2011 amounted to $58.8 million at the then exchange rate.

That is, in terms of the currency equivalent, sales fell 30(!) times. And if the enterprise employed 1375 people in 2011, now the "Ministry of Industry and Trade of the DNR" speaks of about 150 workers employed in the production.

By the way, no one in the "DNR" leadership remembers the bold plans of 2017 to launch the Donbas buses production at Dongormash.

It went wrong with the buses, but the enterprise was making metal structures for some - which in terms of creating added value is a giant step back in comparison with the production of buses.

Now metal structures look like a cosmic achievement in comparison with the smelting of cast iron - the primary semi-finished product for the production of finished steel products.

Using the example of this descending chain of "buses-metal structures-cast iron", one can assess the degree of degradation of the Donetsk industry under the conditions of the "DNR".