Mandatory vaccination, crowded hospitals and influx of tourists. The story of a nurse from the occupied Crimea
04/29/2021 17:04

The fate of the Ukrainian coal industry, in fact, has already been decided. All mines, most of which are located in the Donbas, will be closed. Both state and private. This is indicated by the latest trends in European and Ukrainian power industry. As well as by the decisions made by the European Commission and the Cabinet of Ministers of Ukraine.

The question now is different: how exactly the patient will die. Easy and painless, or in the agonizing convulsions that accompany the birth of the new carbon-free economy of the future.

Based on the experience of the transformation of coal regions in European countries, it can be assumed with 100% certainty that it will not be easily and painlessly. This is an objective reality. It is just not clear: why does the Ukrainian government traditionally choose the worst option for its country?

On the one hand, Ukraine is not a member of the European Union and is not obliged to fulfill the Green Deal milestones: achieving carbon neutrality of the economy by 2050. This implies (almost) a complete cessation of greenhouse gas emissions into the atmosphere - incl. due to the abandonment of coal in metallurgy industry and thermal power engineering.

On the other hand, the upcoming introduction in the EU of a "carbon tax" on products using faulty technologies and energy does not leave much space to manoeuvre. Either lose the European market, or play by the new European rules.

That is why, back in January 2020, the then Energy Minister Oleksiy Orzhel announced plans to completely abandon coal-fired power generation by 2050. He advised the children "from the miners’ families to look for more interesting and promising directions for education for possible future work".

Olha Buslavets, who replaced him in the post of head of the Ministry of Energy, stated in December 2020 that Ukraine would be able to completely stop using fossil fuels (and this implies abandoning not only coal, but also gas, i.e. thermal generation completely) by 2070.

However, Prime Minister Denys Shmyhal specified at the same time in December 2020 that it was planned by 2070 to move away from solid fuel in the production of electric power.

It follows from this that the gas-fired power units of the TPPs will continue to operate. But, nevertheless, we have to finally say goodbye to coal. This means the closure of all mines without exception, and not just unprofitable mines, as previously announced by the Ministry of Energy.

According to O.Buslavets, it is planned to close all unprofitable mines by 2031. Currently, only 2-4 are profitable out of 33 operating state-owned mines.

Nevertheless, Mykhailo Volynets, a member of the Verkhovna Rada's Energy Committee, claims that the Cabinet of Ministers is currently considering the closure of only 13-17 mines, i.e. about half.

The adoption on January 13 of this year of a government decree on the definition of criteria for state subsidization of state-owned coal mines should be considered a step in this direction.

In accordance with it, state-owned mines can apply for budgetary funding only to construct new longwall faces, to cover exceptional one-off costs (for example, liquidation of the consequences of an accident) or in case of closure.

But these provisions will take effect only from January 1, 2023. Thus, for another 2 years, coal mining enterprises will receive subsidies to cover operating costs.

This means the preservation of existing corruption schemes in the industry, primarily in the form of purchases of equipment, components, materials, work and services at inflated prices.

The heads of state-owned mines simply have no incentive to reduce the cost of coal production – if the "good" state generously covers the difference between the costs and the selling price of coal from its own pockets. More precisely, from the pockets of taxpayers.

According to the results of audit of the public sector of the coal industry, the Accounts Chamber of Ukraine regularly submits conclusions to the Cabinet of Ministers on the ineffectiveness of industry state support.

The volume of subsidies is growing every year, while the state-owned mines are producing less and less coal.

With such a pace, coal mining in the public sector has every chance to end by 2031 without additional actions from the Cabinet of Ministers and the Ministry of Energy.

The end of subsidizing current operating expenses from January 1, 2023 will accelerate this process.

However, the coal blocks of TPPs will not be pull out of service so quickly. In this case, the necessary fuel for their operation will have to be purchased abroad.

This, in turn, means a decrease in energy independence and a worsening of the already unfavorable balance of payments of the country due to the growth of energy imports.

Who will pay for the banquet?

Most of this volume is accounted for by the DTEK holding, which is actively involved in the construction of wind and solar power plants.

At the end of December 2020, the company presented its development strategy until 2030, having announced its intention to become carbon-neutral by 2040. That is, to completely shut down all of its coal-fired power plants. That means, to stop coal mining as well.

Theoretically, it could be exported, but the content of harmful impurities (primarily sulfur) in the Donbas coal is much higher than that of foreign analogues. Therefore, there is virtually no export potential.

It only remains to decide: who will finance the "green transition" of the Ukrainian energy sector and what about the mining towns and villages? 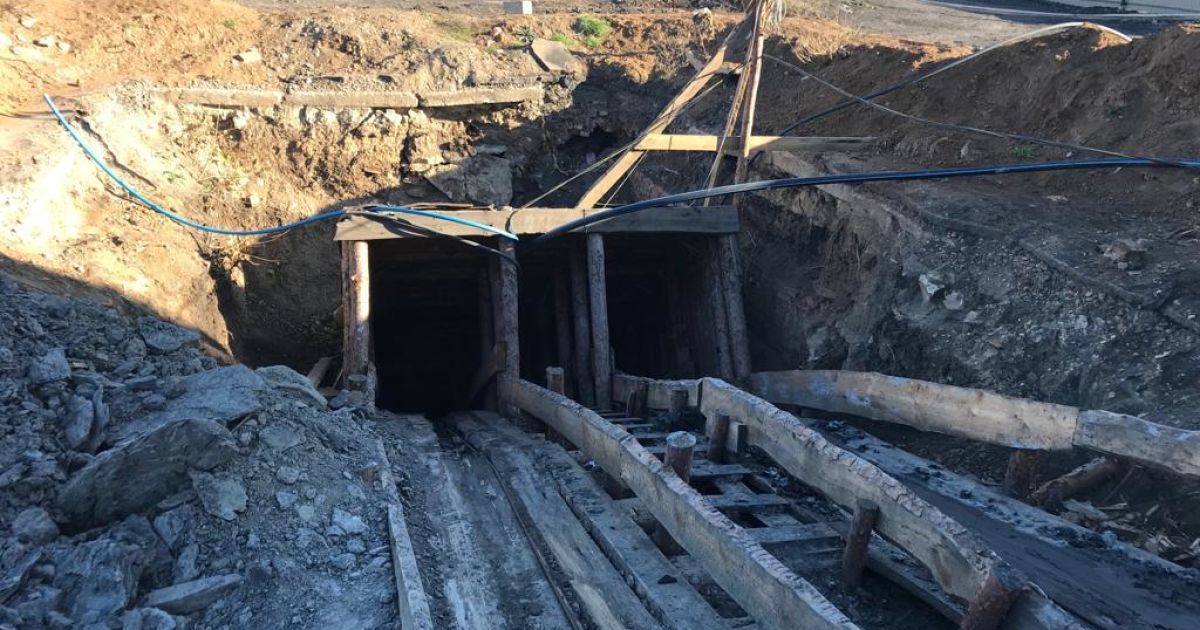 Earlier, O.Orzhel noted that the costs of closing one mine and transferring it to a sustainable site amount to UAH 200-500 million.

In general, according to the Ministry of Energy, the termination of coal production requires UAH 14-15 billion over a period of 5 years, together with a social package for dismissed miners.

Amounts comparable to the current volume of government subsidies for the state coal industry. That is, quite feasible for the state budget.

What is better: to constantly throw such funds to support the rapidly falling coal production or to spend one-time money on "amputation" – and forget about the industry parasitizing on budget finances of the branch? The answer seems to be obvious.

However, the amounts announced by O.Orzhel do not include the costs of adapting coal regions to new living conditions after the closure of mines.

That money, UAH 14-15 billion, is, at best, only enough for severance pay for dismissed miners. And how much is actually needed?

In this regard, it is appropriate to look at the experience of Poland, which energy industry is based on coal. Firstly, the official Warsaw managed to get the European Commission to postpone the closure of all mines from 2038 to 2049.

Secondly, in exchange for joining the Green Deal Pact, the Poles will receive €160 billion from the European Union in 2021-2027, of which €125 billion will be direct budget subsidies and the remaining €35 billion – in the form of loans.

Allocation of €56 billion for the transformation of coal regions is a separate line. This is primarily about Upper Silesia, the Polish Donbass.

Now we are comparing data on coal production in Poland and Ukraine. In 2019, it was 61.6 million and 31.2 million tons, respectively. If we take the cost of transforming the coal industry on the basis of 1 ton of mined coal – €28 billion is needed in Ukraine for these purposes.

This is generally, without dividing into the public and private sectors. State-owned mines, in particular, need €3.245 billion, or UAH 110.37 billion at the current exchange rate. This is 7(!) times more than the Ministry of Energy estimated.

We can count in another way. The Polish coal industry employs about 80 thousand workers. 36 thousand - in the Ukrainian public sector.

If we take how much decarbonization costs in terms of 1 miner, then we need € 25.2 billion, or UAH 857 billion, for the public sector alone. And this figure looks the most realistic – if we really approach the coal transformation in a European way.

Prime Minister D.Shmyhal formulated this at the German-Ukrainian Energy Forum in December 2020 quite carefully. According to him, it will be difficult for Ukraine to stop using coal on its own, without international support.

However, Germany, Great Britain and the European Union agree to provide only consulting assistance: to develop a strategy, concept, program and roadmap of necessary reforms.

In other words, they are ready to help us, but only with advice. Not money. After all, Ukraine, as noted, is not part of the EU. Therefore, unlike Poland, it cannot influence the decisions of official Brussels.

This is why European politicians and officials do not see the point in financing the Ukrainian coal reform. This means that it will go according to the worst-case scenario – without the necessary budgetary support.

There will be 65 mining towns and villages in the unenviable role of "drowning" – and, obviously, few of them will be able to "swim out". This is about the transformation of public sector of the coal industry.

As for R.Akhmetov's DTEK holding, which now accounts for about 90% of Ukrainian coal production, its actions can be predicted on the basis of the existing case with the Dobropilvuhillia assosiation.

It has been at DTEK's disposal on a lease basis since January 2011. The lease agreement was signed until 2060, but in October 2020, Akhmetov's managers returned Dobropilvuhillia to the state.

As unnecessary. Taking into account the steady European trend towards decarbonization, which Ukraine will have to reckon with in one way or another.

Now it turns out that the entire financial burden associated with the upcoming closure of mines in Dobropillia falls on the shoulders of the Ukrainian state. DTEK is out of business.

More precisely, not completely out of business. The company has developed a "program for the economic diversification of the Dobropillia Amalgated Territorial Community".

That is, following the example of European partners, R.Akhmetov is ready to help the residents of this region with "valuable" advice. And nothing else. As the saying goes, "there's no money, but you hang in there!" Such a "sustainable business".

It is logical to assume that the remaining coal assets - the Bilozerska mine and the Pavlohradvuhillia association - will be "sent off" by DTEK to the state according to the same scheme.

As former workers of Pavlohradvuhillia note, underground reserves suitable for mining are gradually being depleted there. In the best case, they will last for another 20 years – just until 2040, by the time DTEK announced its transition to climate neutral status.

Closer to this date, the association will be returned to the state by terminating the privatization agreement through the courts or in a different wrapper, which will be prepared in the legal department of DTEK.

And then, the current mining towns will be desolate and fade away, following the example of many Ukrainian villages. Whoever can – will leave, abandoned old people will die out.

Alas, this is the most realistic scenario for Donbas today. Although it is the saddest one.

The Ukrainian state now is not capable of giving the coal regions a "second life" – as the same Germany did in the Ruhr.