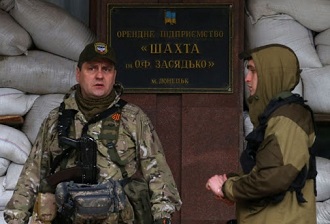 A fire in the mine working which happened at the Zasyadko mine in occupied Donetsk on September 23 continued to be extinguished. Nothing is known about the fate of the missing miner. This was reported by the fake "DNR Ministry of Emergency Situations" on September 28.

"As of 06.00 on 29.09.2021, a person who did not come to the surface was not found. Extensive fire control continues, muck drawing and cooling the lining fuel elements and smoldering rock mass are being carried out. The gas situation is being monitored and sampling of the mine atmosphere is being carried out", - the so-called "DNR rescuers" reported.

At the same time, it was written in the separatist segment of social networks that "the fire that occurred in the eastern belt entry brought more serious consequences than previously thought".

The local blogger also clarifies that the missing 39-year-old D.Afanasyev has not yet been found.

"But what is clear for sure: the conveyer band, which, in fact, caused the fire, was completely destroyed. Moreover, the mine workers claim that both as a result of the fire itself and its subsequent extinguishing, the gate entry at a depth of 1235 was completely covered with rock, and there is no passage at the moment. The rescue operation, as well as the possible restoration of work, is hindered by the power outage of the Ministry of Emergency Situations of the DNR, which was done absolutely correct, as there is water flooding in many places on the ground", - the blogger told.

He reports that the situation at the mine is critical and, possibly, this accident could lead to the mine closure.

"In general, the situation can be described approximately as follows: at the moment, the necessary work is being carried out mainly by rescuers and with the involvement of miners, but… in a month or two, when the rescue operation is over, according to the workers of the Zasyadko mine, the question will be: how much money will have to be invested to restore the mine and whether it will be effective. The problem is that pessimism prevails at the moment, and many believe that it will be easier to close it", - it is written in the separatist segment of social networks.

The exact cause of the accident at the mine is not named, but in general, it is said about the terrible safety rules at the CADO mines.

"Industrial safety is now quite a relative concept in the LDNR, the main thing is to provide coal at any cost, but it seems that law enforcement officers will find some other reason, that is, there will definitely be new accidents", - the blogger writes.

As reported by OstroV, the so-called "Ministry of Emergency Situations of the DNR" reported on September 21 that 610 violations of labor protection rules were revealed at the mines.