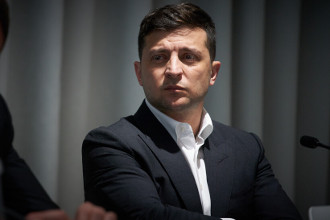 President Volodymyr Zelensky admits the likelihood of a full-fledged war with Russia. He stated this on the YES Brainstorming forum "After COVID = Before the Catastrophe? Steps to Survival" in Kyiv on September 10, - Ukrayinska Pravda reports.

"I think that it may be (a full-fledged war - ed.). It seems to me that 2014 was a step forward in this issue on the part of Russia and then, thanks to the Ukrainians, a step back, they were stopped. This topic has potential. I think that this will be the biggest mistake of the Russian Federation. I think that there will never be a neighborhood of Russia, Ukraine and Belarus after that, because there is a presence of Russia on the territory. This is the worst thing that can be, but, unfortunately, there is such a possibility", - the president said.

According to Zelensky, much attention was paid to the security issue at the meeting of the Ukrainian leader with the U.S. President Joe Biden. Zelensky noted that Biden understands the threat from the Russian Federation. In particular, Biden supports Ukraine's proposals to strengthen the navy and air defense.