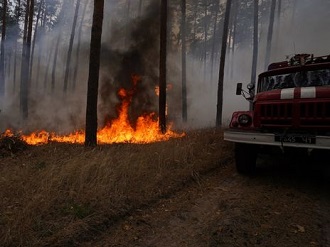 Another arson was recorded between the settlements of Nyzhnioteple and Artema of the Stanytsia-Luhanska district, the press service of the local state administration reports.

Even places where there were no fires in 2014-15 "suddenly" burst into flames after large-scale attacks from Grad. There is another arson between the settlements of Nyzhnioteple and Artema. The fire comes close to the electrical substation. Rescuers contain the fire. Ammunition detonates as a result of the fire", - the report says.