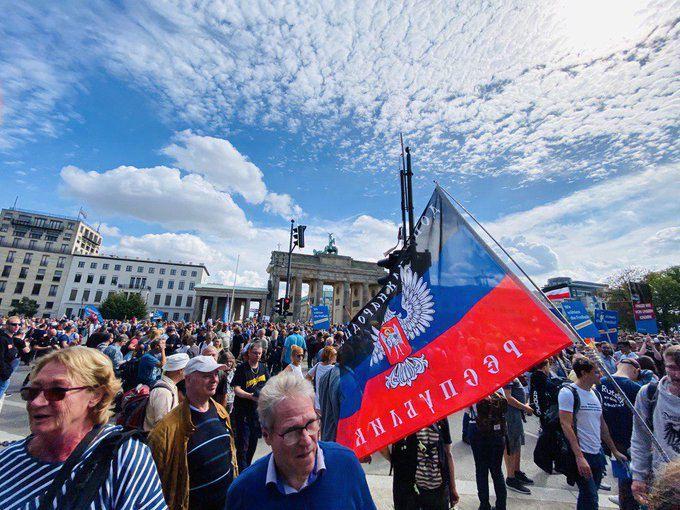 Sympathizers of the terrorist "DNR" were seen in the street riots of the so-called COVID-19 dissidents in Berlin with the corresponding flag. The leaders of the "republic" present this fact as "international recognition" of the illegal entity. Berlin, Germany, 29 August 2020

As previously reported, opponents of the restrictive measures imposed due to the COVID-19 pandemic tried to storm the historic Reichstag building in Berlin, where the German parliament sits, on Saturday. The rally of covid dissidents began as a peaceful march on Saturday afternoon and attracted at least 38 thousand participants, among whom there were activists of the far right movements, supporters of conspiracy theories and the so-called Reichsburgers - members of the nationalist movement that does not recognize the authority of the Federal Republic of Germany in Germany. They consider themselves citizens of the "German Reich" in the pre-war borders, form authorities independent of the official authorities and attack representatives of the FRG security forces. The first clashes began on Saturday evening between about three thousand protesters and the police – at first, near the Russian embassy on Unter den Linden boulevard, then near the Reichstag building. The demonstrators with flags of Russia and the "German Empire" broke the fence at the Republic Square and broke through the steps to the front door.