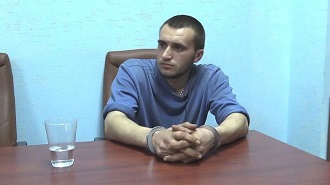 The occupation authorities sent captured soldier of the Armed Forces of Ukraine Volodymyr Voskoboynikov to the colony for 30 years. This is stated in the report of the so-called " prosecutor general's office of the republic".

The Ukrainian soldier is charged with "training for terrorist activities", "violent coup", "illegal crossing of the "DNR" "state" border and illegal acquisition and possession of weapons".

The "prosecutor's office" reports that contract soldier Voskoboynikov took part in the JFO as driver-mechanic of a combat reconnaissance vehicle, and, according to the occupiers, took part in shelling of residential areas of the occupied territory of Donetsk oblast.

There was a video of the interrogation of a captured soldier of the AFU in the separatist media earlier. The 30th Novohrad-Volynskyi Rivne Brigade recognized him as missing Volodymyr Voskoboynikov.

According to BBC News Ukraine, he volunteered to fight as soon as he turned 19, having left his mother and four sisters. The husband of his older sister died in the ATO zone in 2014.