Press secretary of President of Ukraine Volodyymyr Zelensky Yulia Mendel attacked a journalist and prevented him from asking a question to the head of state and his deputy Andriy Bohdan. This is said in the material of Radio Liberty "Andriy Bohdan. "Undeserved" title and diploma from Azarov in the midst of Euromaidan".

The article says that journalists tried to directly ask a question to Andriy Bohdan and his immediate supervisor - President Volodymyr Zelensky. It was about the participation of current head of the Presidential Office in negotiations in Russia in 2013, after which the Yanukovych-Azarov government refused to sign an association agreement with the European Union. "The speaker and the president's guard did not let the journalist of Schemes ask a question - they held him, preventing from approaching the president and the head of his Office", - the article says.

In turn, journalist of the Radio Liberty Scheme project Mykhailo Tkach posted on his Facebook screenshots of the video, which show that press secretary Yulia Mendel rudely repels the journalist from Volodymyr Zelensky and Andriy Bohdan.

"Who can explain in what civilized country of the world a presidential spokesperson allows him/herself to do this when a journalist wants to ask a question to the top officials! What does it stand for!?", - Tkach wrote. 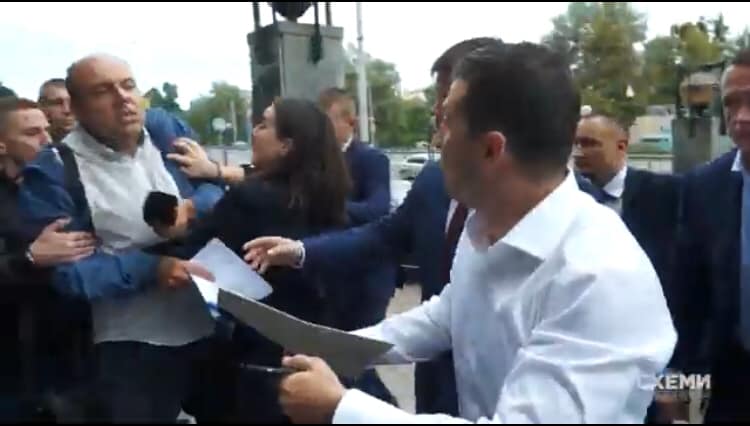 Foreign journalist Christopher Miller commented on this incident on Twitter as follows: "Ukraine's Zelensky is giving media interviews in NYC. But this is how his press team treats reporters in Kyiv".