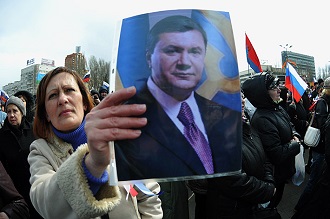 The creation of an "autonomous republic" in the east of Ukraine headed by ex-president of Ukraine Viktor Yanukovych was offered to head of Trump's campaign Paul Manafort by Russian intelligence officer Konstantin Kilimnik. This is stated in the report of special prosecutor Robert Muller, - RBC-Ukraine reports.

The report says that Manafort subsequently acknowledged that the plan "provided for an "informal" way for Russia to control the East of Ukraine" and refused it.

"Manafort and Kilimnik discussed (on August 2, 2016 - ed.) the plan for solving political problems in Ukraine, which included the creation of an "autonomous republic" in the industrial region in eastern Ukraine, Donbass, and election of the exiled in 2014 Ukrainian President Yanukovych as head of this "republic", - the report says.

As previously reported, on April 18, 2019, the United States Department of Justice published a report by Special Prosecutor Robert Muller on the results of the investigation into the Russian intervention in the U.S. presidential election in 2016. On April 18, Prosecutor General and head of the U.S. Department of Justice William Barr read out a part of Muller's report, which says that the Russian Federation intervened in the 2016 election in the USA, when Trump was elected. However, according to Muller, the administration of the U.S. president did not cooperate with the Russian party.

Friday, September 23
"Karaoke microphone and music speaker". How does the "referendum" in Donetsk take place (PHOTO, VIDEO)
AFU destroy 550 rashists, 18 tanks, plane and helicopter over a day - General Staff
Start of "referendums" on annexation of occupied territories announced in russia
Putin is not decree. Kadyrov said that there will be no mobilization in Chechnya, because "the plan was overfulfilled"
Thursday, September 22
Zelensky proposes "peace formula" of five components to UN General Assembly
Russians flee en masse from putin's mobilization to Finland and Georgia (VIDEO)
Ukraine returns 200 defenders home in exchange for Medvedchuk – SBU told details
Yermak: We returned 215 heroes from russian captivity
Ukraine returns famous defenders of Azovstal from captivity (PHOTO, VIDEO)
Chief police officer of Mariupol - defender of Azovstal, returned from russian captivity
Wednesday, September 21
Protests against mobilization putin announced begin in Siberia and Far East (PHOTO)
"Referendums" organized by russian federation in occupied territories not to have legal force - OSCE
300 000 reservists to be called up in russia for war against Ukraine as part of "partial mobilization" - Shoigu
Putin announces partial mobilization in russia today
Putin's appeal is postponed without explanation, and his press secretary stops communicating
All news »