The "LNR" militants were unsuccessfully trying to convince the observers of the OSCE SMM that the AFU allegedly shelled a maintenance team of utility providers. This is stated in the Mission's daily report.

The report comments on attempts by the terrorists to attract the SMM observers as witnesses of "crimes of Ukraine". So, on April 13, the really not existing and unrecognized "representative office of the LNR in JCCC" spread information that "during the emergency recovery work on the main water conduit… near the village of Obozne, while monitoring the OSCE SMM mirror patrols, in spite of the received security guarantees from the Ukrainian party, employees of Luhanskvoda company and officers of the Representative Office of the LNR in the JCCC were subjected to shelling by the Armed Forces of Ukraine from small arms (10 short bursts)… on vehicles in the area of carrying out the emergency recovery work".

The militants stated that "as a result of the shelling, the GAZ-66 car of Luhanskvoda company was damaged, in which there was a maintenance team (a bullet hole from a 5.45mm caliber bullet in the glazing of a kung)".

According to the information of the occupation authorities, the OSCE SMM witnessed this incident. 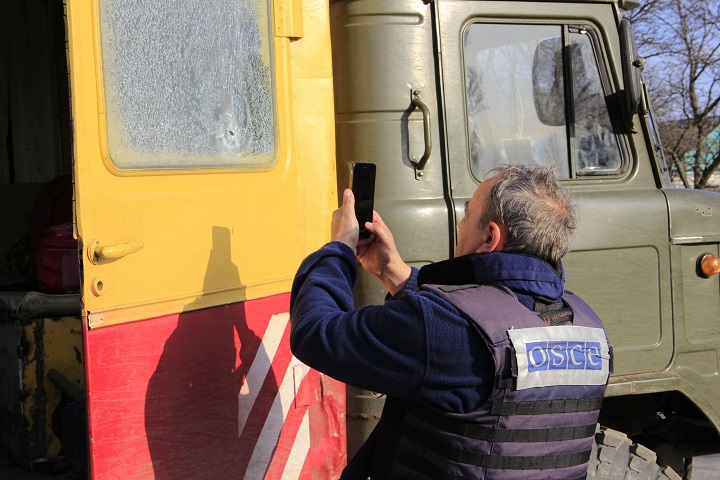 Drive the point home, this information was illustrated by a photo with the Mission's observer recording "the consequences of shelling".

In fact, as explained in the OSCE SMM, within the day specified, "two members of the LNR approached the observers, holding cameras and videoing the SMM patrol, and said that the maintenance team at the site of the repair work had come under shelling from small arms". As a confirmation of their words, the militants demonstrated broken glass from the passenger side of the car of the maintenance team to the observers. On closer inspection, it turned out that the bullet, allegedly fired by the AFU, did not even break through the glass! "The observers noted that the outer side of the glazing had cracked, but the internal one remained intact", - the Mission's report said.

For this reason, the observer team made it clear that "the Mission could not confirm that there was a small arms fire".