On March 19, Polish nationalist organizations held a rally under the Ukrainian Embassy in Warsaw, where they burned portraits of Stepan Bandera and Roman Shukhevych , according to Europeiska Pravda.

The event was described by one of its participants, Polish deputy Robert Winnicki from the ultranationalist movement Ruch Narodowy, represented in the Polish Sejm by one deputy. The Ruch Narodowy representative says the rally is a response to a recent nationalist march held in Lviv on March 4 in the honor of Roman Shukevych, who is "responsible for the genocide in Volyn". The rally was joined by the National Radical Camp and the All-Polish Youth organization.

Nationalists chanted slogans: "Shukhevych is a murderer", "Banderites are killers" and held posters with the inscriptions "Banderite is not my brother", "StopAntipolonism, Defend the truth". The protesters called on the Polish government to "radically change its policy towards Kyiv". In the end, the nationalists burned portraits of Stepan Bandera and Roman Shukhevych.

Ukraine has condemned an anti-Ukrainian rally held by a group of Polish ultranationalists outside the Ukrainian Embassy in Warsaw on Monday.

According to the statement, the Ukrainian Embassy in the Republic of Poland condemns the rally of some Polish nationalist organizations that on March 19 gathered outside the embassy in Warsaw and pronounced anti-Ukrainian propaganda.

"Consciously or not, but with their actions and statements, they foment intolerance and act in Kremlin's interests. In its imperial policy, there is no place either for a free Ukraine, nor a free Poland, nor a democratic Europe", - the Ukrainian embassy said in a statement.

At the same time, as reported, Poles also came to the Ukrainian embassy, who expressed solidarity with Ukraine and the Ukrainian people under the slogan "For your and our dignity". 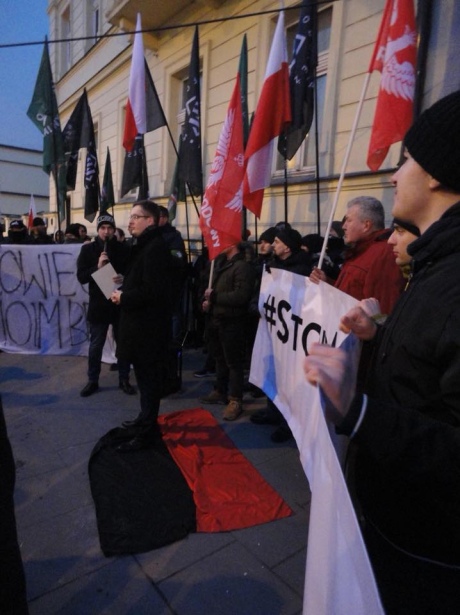 Wednesday, May 25
Russians fire on community in the Kharkiv region. There are dead and injured as a result of fire (PHOTO)
Tuesday, May 24
Bodies of 200 dead found under rubble in Mariupol. Occupiers refuse to bury them - Andriushchenko (Photo)
Russian "hawk" Patrushev raves that "DNR" and "LNR" should receive reparations from USA Europe
9 officers of Vinnytsia KORD killed in Zaporizhzhia oblast as result of missile attack
Britain is considering using sea convoy to export Ukrainian grain
Occupation corps of russian federation is not enough for gauleiter of Kherson region – traitor asks for "russian military base"
Monday, May 23
Authorities of russian federation do not intend to change Medvedchuk for defenders of Mariupol, withdrawn from Azovstal
Russian federation states that it is Ukraine that refuses to negotiate - "the ball is on its side"
Sunday, May 22
Deputies extend martial law and general mobilization in Ukraine for three months
AFU destroy Tyulpan self-propelled heavy mortar of russian federation, confirming defeat of equipment of this class for first time in history (VIDEO)
Attempt to liquidate self-appointed "mayor" in occupied Enerhodar - social networks (PHOTO)
Saturday, May 21
Zelensky couple tells how they met russian invasion in morning of February 24
Largest research center in field of aviation and astronautics is on fire in russia
VIDEOFACT: "DNR" riflemen control deportation of Mariupol residents: it will not be possible to avoid
232 children have died in Ukraine since beginning of war, more than 662 have suffered – Office of Prosecutor General
All news »