Ukrainians organized an action against propagandist and "DNR" militant Prilepin in Paris: there were skirmishes with security 03/19/2018 18:20:25. Total views 677. Views today — 0.

A protest action against the annexation of Crimea and the events of Russian writer Zakhar Prilepin, who took part in the armed hostilities on the side of the "DNR", was held at the book salon in Paris by Ukrainians, - Ukrinform reports.

The action of Ukrainian activists took place during the presentation of Prilepin's book, at the same time, there was a clash of Ukrainian activists with the security, which opposed holding of the protest action and took away posters from the activists. "We put up posters, first of all, to, remind that Crimea belongs to Ukraine and was annexed by Russia, and it happened four years ago on March 18. Secondly, we opposed Zakhar Prilepin, his participation in the international book salon in Paris, what is a total absurd, this is a presence of terrorist who fought against Ukrainian soldiers on the Ukrainian territory", - one activist reported.

"This outraged most of all – a murderer, a man who tells everyone how he formed detachments of murderers who come to Ukraine arrived to France, where the most significant book salon in Europe is taking place. And today, Russia, which is an honored guest of the salon, presents the murderer and the murderer's books at its stand. It touched us very much, that is why we came and expressed our position", - another representative of the Ukrainian community, who took part in the protest, explained to the agency.

Ukrainian activists reported that the security had aggressively reacted to their action. "We do not know which side this security was from - more than likely, from the Russian side, even though they said they were French, but some of them spoke Russian", - representatives of the Ukrainian community in France noted.

"At the protest action, which was held on March 17, we managed to put Zakhar Prilepin critical issues. In particular, one activist asked if he was going to write a book about his own activities, which could then be presented to the Hague Tribunal. Another activist said that she had no questions to Prilepin because he should be questioned by the prosecutor. And on March 18, he was presenting a book about the Donbass, and everyone knew that the event would be a controversial one, - representatives of the ultra-right forces in France came who also served as secutity", - one of the activists reported.

At first, the security took posters from the hands of activists, when they got new ones, they entered into a verbal exchanges with them. Seeing the situation, ordinary French people stopped and expressed their indignation by the fact that it was not allowed to speak freely in the territory of the salon. "France is a democratic country, and everyone has the right to say what he thinks. This is not Russia", - the salon's visitors and Ukrainian activists told the security. 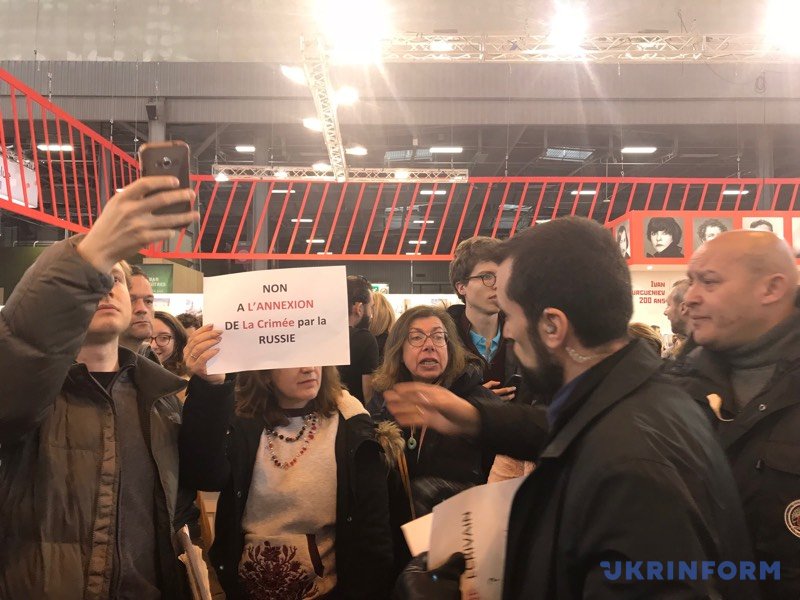 Russian writer Zakhar Prilepin became deputy commander of the special forces battalion for work with the personnel of the "DNR". Even some supporters of the "republic" believe that this "appointment" is nothing more than a propaganda coup. However, Prilepin calls himself a real active duty officer. In an interview on this subject, he was asked whether he was embarrassed that he had taken up arms and would have to shoot: "No, of course, nothing bothers me. All this theatrics that you are a writer, so you do not have to do something, does not bother me at all". At the same time, he stated that the aim of the pro-Russian militants was to seize Kyiv. On February 16, 2017, the Security Service of Ukraine opened criminal proceedings against him.