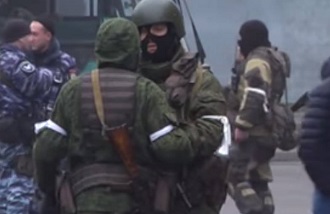 The center of occupied Luhansk, including the administrative buildings, was captured by a group of unknown people in military uniforms without insignia and belonging to some organizations. This is reported by Novaya Gazeta with reference to sources.

According to the sources, the unknown people are armed with small arms and mortars. The leader of the "LNR" Igor Plotnitsky, who was at work in the morning, ordered them to free the city, but they "ignored" the order.

"Unknown people block access to administrative buildings, employees of the government and people's council are dismissed to their homes", - the newspaper writes.

As the newspaper writes, anecdotal evidence suggests that three military Ural with soldiers of the "republican state guard service", which reports to the leader of the "DNR" A. Zakharchenko, arrived in the occupied Luhansk from Donetsk.

As previously reported, on November 20, the leader of the "LNR" dismissed Igor Cornet from the post of "Minister of Internal Affairs".

According to Novaya Gazeta, Cornet refuses to obey this "decree".

The cases of armed conflicts, as well as the demands, put forward by unknown armed men, have not yet been reported. According to them, the "MIA" holds anti-terrorist exercises.