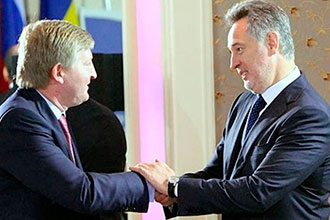 The faction Opposition Bloc is on the verge of a split, which was initiated by the oligarch Rinat Akhmetov, -Ukrainska Pravda writes.

According to the publication, in early February instead of one OP faction, two deputy groups may appear in the parliament. One will be focused on Rinat Akhmetov, the second - on the RosUkrEnergo group, i.e. Serhiy Lyovochkin and oligarch Dmytro Firtash.

"In the next parliamentary week, for example, on February 7, about 24 deputies focused on the Donetsk oligarch will leave the Opposition Bloc faction. Thus, 19 Firtash-Levochkin’s MPs will remain there, as well as 3 MPs within the influence of Viktor Medvedchuk - Nestor Shufrich, Vasil Nimchenko and Taras Kozak. The reason for the split is a long-standing confrontation between the two groups within the faction", - the article says.

The source in Akhmetov's group urges that the question of a split is decided at 99.9%, and it is inevitable. He names several reasons: different points of view on governing the state and the need for a different vision of the early parliamentary elections. Akhmetov’s group believes that they are not relevant for now. The patched up relations of Akhmetov and President Petro Poroshenko also influence the situation. The MPs have already discussed who would head the newly created group, and referred to three probable names – Nataliya Korolevska, Oleksandr Vilkul and Vadym Novinsky, who now has the best chance.

As previously reported, in 2016 the authorities made Donetsk oligarch an expensive gift in the form of a formula for determining the price of "Rotterdam +" coal, which allows him to sell electricity at 15-20% more expensive. In November 2016, Firtash-Levochkin’s group was ready to increase the faction in parliament and to take part in the formation of the coalition and to demand changes to the Constitution in terms of changing the form of government to parliamentary, to weaken the president. Moreover, members of the group insisted that the parliamentary group Vidrodzhennya could join their faction.