Employees of the Russian FSS of Russia plan series of provocations in the ATO area in the period from 22nd to 28th of August. Security Service of Ukraine has such operational information, - a source in the SSU informed OstroV about that.

According to him, the aim of provocation is to discredit the Armed Forces of Ukraine in the eyes of the civilian population and international community.

In particular, Intelligence recorded transfer of 200 sets of uniforms of the Armed Forces of Ukraine with chevrons and differentiating marks from FSS curators to pro-Russian militants. "They plan to use this uniform for armed provocations in the area of ​​Gorlovka, Yasinovataya and Marinka," - said the source.

"It also became known that the Ukrainian military uniform was planned to be used on the territory of the temporarily occupied Crimea. Thus, FSS agents plan to accuse Ukraine of the armed attack to justify a possible military aggression in the south of our country," - said the employee of the SSU.

He stressed that Ukraine continues to adhere to the Minsk agreements. The military open fire only if there is a threat to their lives.

Previously, the information "from the competent comrades" about the planned "disclosure of Ukrainian provocation" which would give "carte blanche" to the Russian Federation was told by "militia", coordinator of the "non-humanitarian aid" and supply of mercenaries to the so-called "DPR" Alexander Zhuchkovsky. 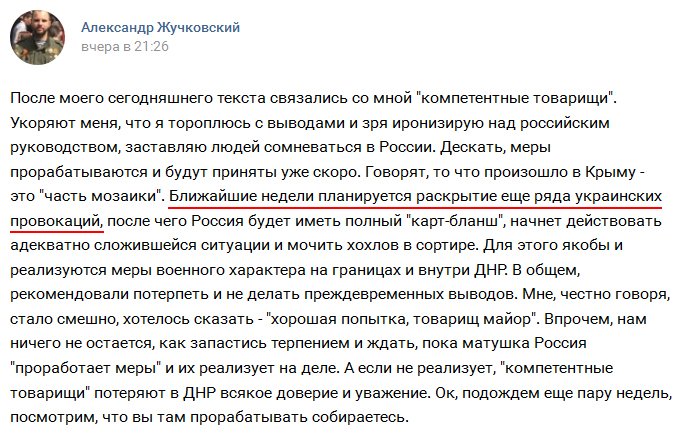