Serhiy Harmash: I did not see any signs at the TCG that the Russian Federation was up to a constructive dialogue. But out of negotiations…
06/18/2020 10:31

Leader of the "DPR" Alexander Zakharchenko appointed Ivan Prikhodko, who previously directed the "administration" of Kuibyshev district of Donetsk, on the position of acting head of the occupation "city administration" of Gorlovka. Prikhodko himself posted the corresponding "decree" on his Facebook page.

Prior to the "Russian Spring" Ivan Prikhodko was deputy chairman of the Voroshylov District Council of Donetsk.

Earlier odious Stanislav Kim "ruled" in occupied Gorlovka, he became widely known for his bizarre statements. In particular, Kim declared himself "Commander-in-Chief of the USSR" and recorded a video message to the ATO forces with the requirement to raise red flags. 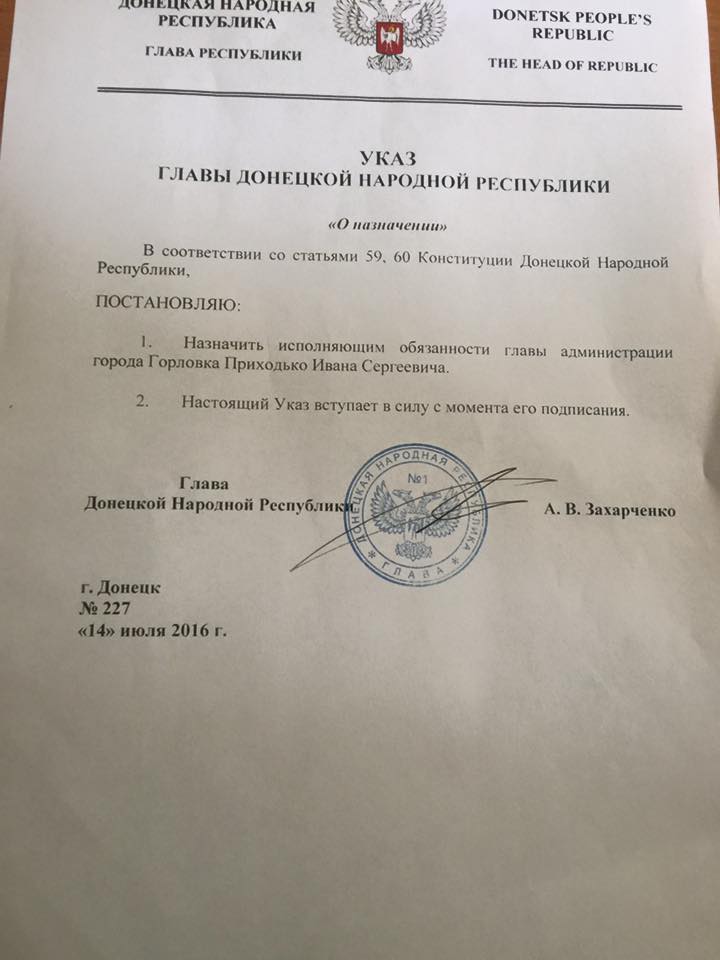 Tuesday, July 07
In gray zone under boiling sun: "DNR" authorities do not let more than 100 people into occupation zone (PHOTO)
Back home! Only 190 people receive permission from "DNR" authorities to return to occupation zone (PHOTO)
PHOTOFACT. Cars and citizens wishing to leave occupation zone line up from early morning to leave "DNR"
Leader of "DNR" entrusts "operational headquarters" to decide when to close/open Olenivka checkpoint
564 new cases of COVID-19 confirmed in Ukraine over the day
Monday results in the occupied territories of Donbass. The highlights
Monday, July 06
Kremlin hears nothing about inclusion of "DNR/LNR" in Russian Federation, and passports are distributed in "humanitarian" way - Peskov
"DNR" confirms that no one from occupation zone will be passed through Olenivka, and people will be passed according to lists
There is no possibility of holding local elections in occupied Donbass according to Ukrainian laws – NSDC
Student blows himself up with grenade in occupied Makiivka of Donetsk oblast: he died in resuscitation department
Reason for cautious optimism: 543 new cases of COVID-19 confirmed in Ukraine over the day
Friday, July 03
Verkhovna Rada fires head of National Bank Yakiv Smolii
Militants destroy two houses in front-line Avdiivka by mortar attack
"DNR" militants are trying to shift blame for death of civilian in Zaitseve to Ukrainian military
Civilians passed, OSCE SMM patrols stopped – occupiers of "LNR" profit from COVID-19
All news »