Medical genocide! What is really happening with the coronavirus pandemic in the occupied Donbas
01/26/2021 14:48

85-year-old grandma Tanya whispered to me that she would like to show her yard "to that black one." "That black one" is a correspondent of 1 + 1TV channel. Grandma Tanya says he looks like her son. Her son is in Russia and grandma Tanya is in the "red zone" on the outskirts of Maryanka, a town near Donetsk. Donetsk "republic" positions are a bit more than three hundred meters away from here. Grandma's daughter Tanya lives there. "Behind barbed wire", - she says, waving towards one of the Ukrainian checkpoints.

In this part of Maryanka there are no unbroken glass - all are beaten by bullets and shrapnel. Because of this, many windows are simply boarded up, covered with sandbags or cinder blocks. In the afternoon light does not penetrate into such homes and at night it is unclear which of them are residential and which abandoned by the hosts until better times or permanently. But it, by and large, does not matter, because after 3p.m the streets of Maryanka are almost completely empty. By this time fire-fighting are usually renewed in the town. 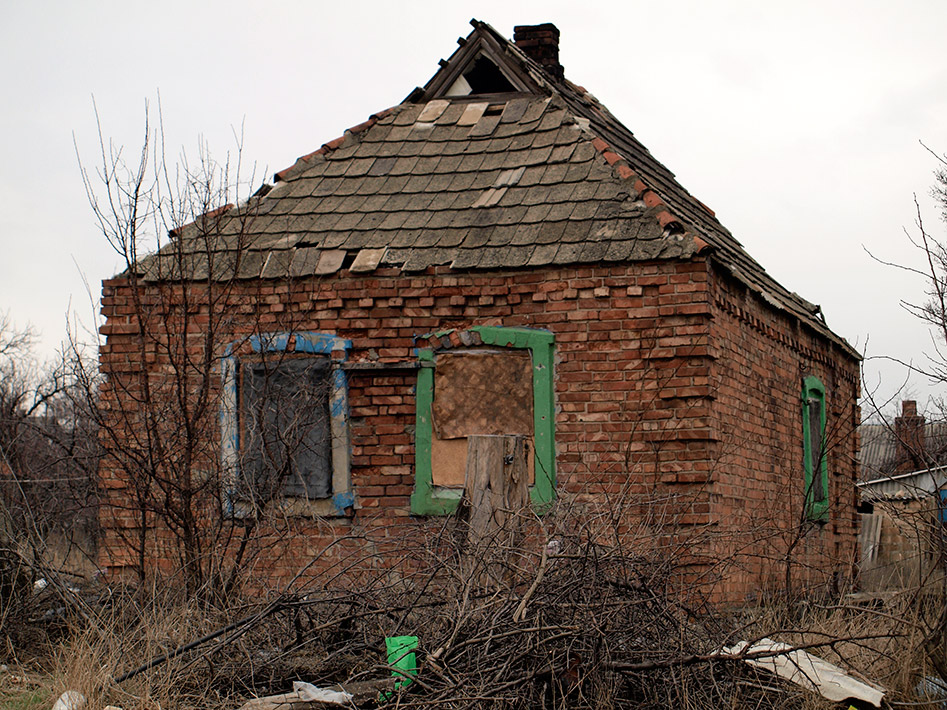 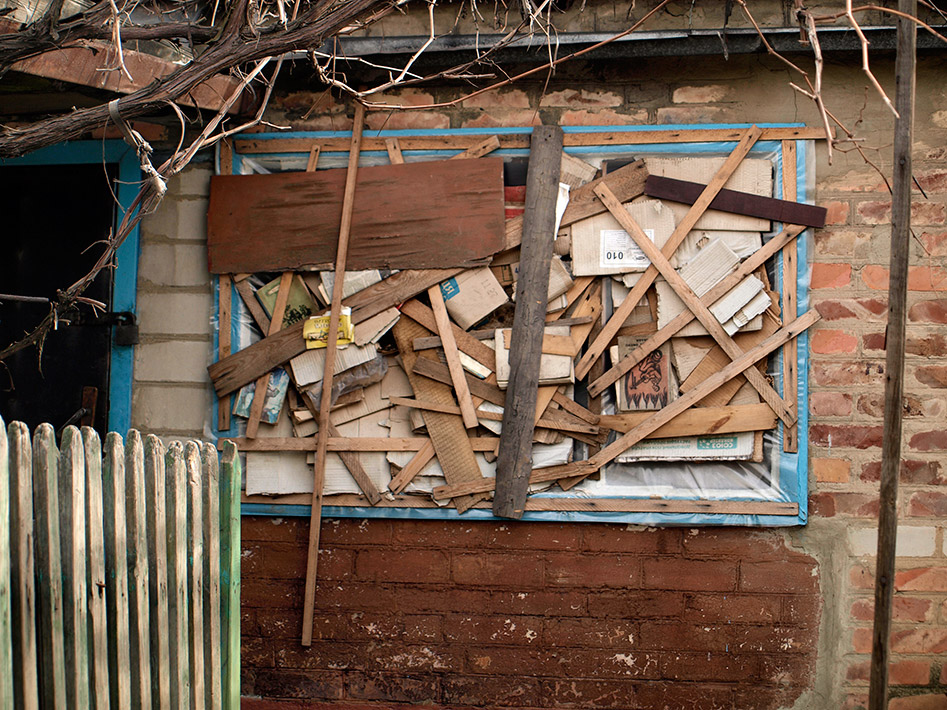 A bullet hit the building of the Protestant Church in the center of Maryanka in the morning on February 29th, Pastor Sergey Kosyak picked it up. At 11 o'clock the children were out of the school. After 14 rifles and machine guns were shooting really hard. The next day we saw from the trenches a steaming roof of one of the bases of "republican" troops near Donetsk. In the evening a strong flame was burning behind the blind houses of Maryanka - a house was burning in the village on the territory of the "republic". One civilian and two militaries were wounded in Maryanka on the eve.

- Once I went to a neighbour, already closed the gate and then saw the fireballs flying in the sky. I fell here and the hot metal rained down on me. Can you imagine that? - sobbed grandma Tanya.

It seems that little Nastya never cries. She either watches cartoons quietly or plays with a toy, or maybe just sits like observing someone, but, in fact, she seems to retreat in herself. Mum Olga said that she had recently treated a girl's fear. Local children suffer from nervous disorders. Olga wants to leave Maryanka but she does not have money. The house in which she lived burnt down completely with all the property inside. The church helps her like many other people.

Maryanka Protestant community is one of the few fires of life in this sleepy place. Clothes, food boxes, hygiene items, coal and stoves are distributed there. They teach theology and pray for peace in Maryanka. Children's club woks here, children are taken on vacation to camp in the summer.

Soon there will be the first bakery in Maryanka and it is a very big event for a small town. The local bakery hasn’t worked for a long time. Bread is delivered from Zaporozhye. But it's not just bread.

- Help yourself - I put on the table a plate with half a sweet bun which I was given at the kitchen here.

- Here you are, - says Pastor Oleg Tkachenko to a woman with whom he discusses the quality of flour and baking nuances. - It all started with doughnuts ...

Next to us there is a man dealing with furnaces and wiring - now there is also an engineer. A neat intelligent-looking man with glasses had been in front of the church, as it seems, before members of the community came. The long-awaited work in the town where there is no place to work for a long time.

It’s past 3 p.m., dull sounds of salvo fires get into the building, but the community cannot leave while a few people are involved in arranging the bakery. It is visible that many people are nervous and very tired. Some people haven’t rested for many months.

There have been no serious clashes in Maryanka for a long time. Small skirmishes do not cause significant damage but exhaust both civilian and military.

- I do not know who I'm defending here, - quietly said one soldier to another, sitting on the bench in a dilapidated house on the street with mocking title of Mir (peace). A few shells hit it a year ago. They killed a 9-year-old boy and seriously wounded his grandmother and older brother. 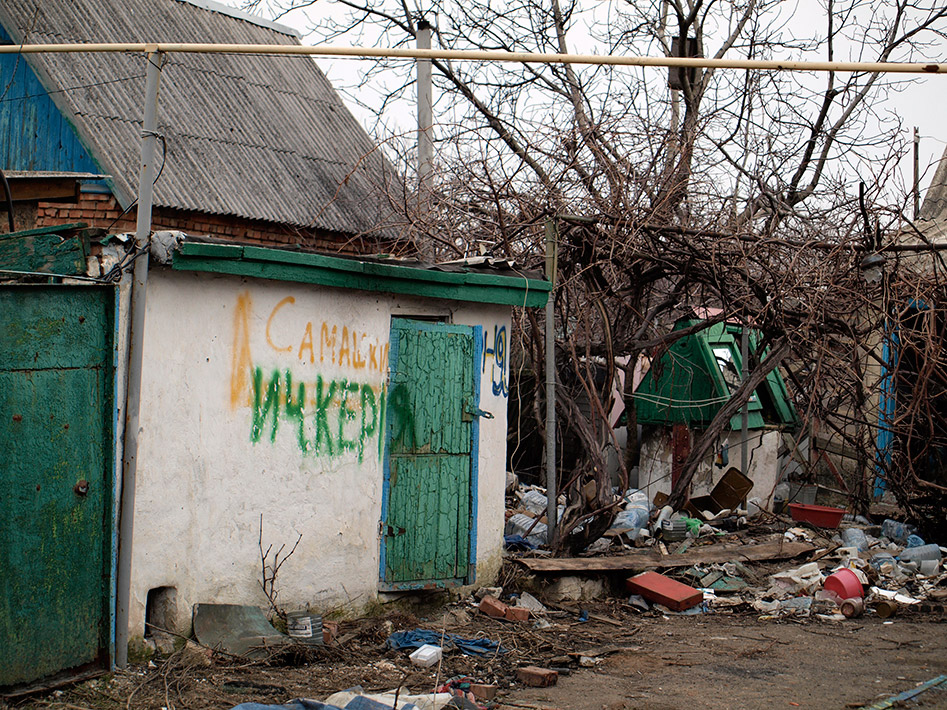 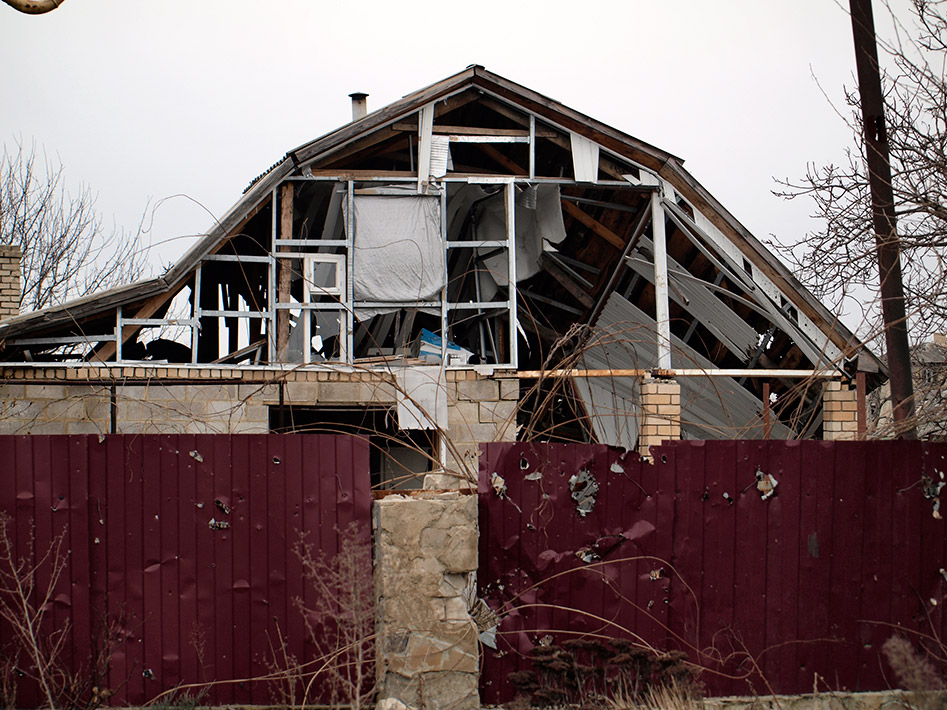 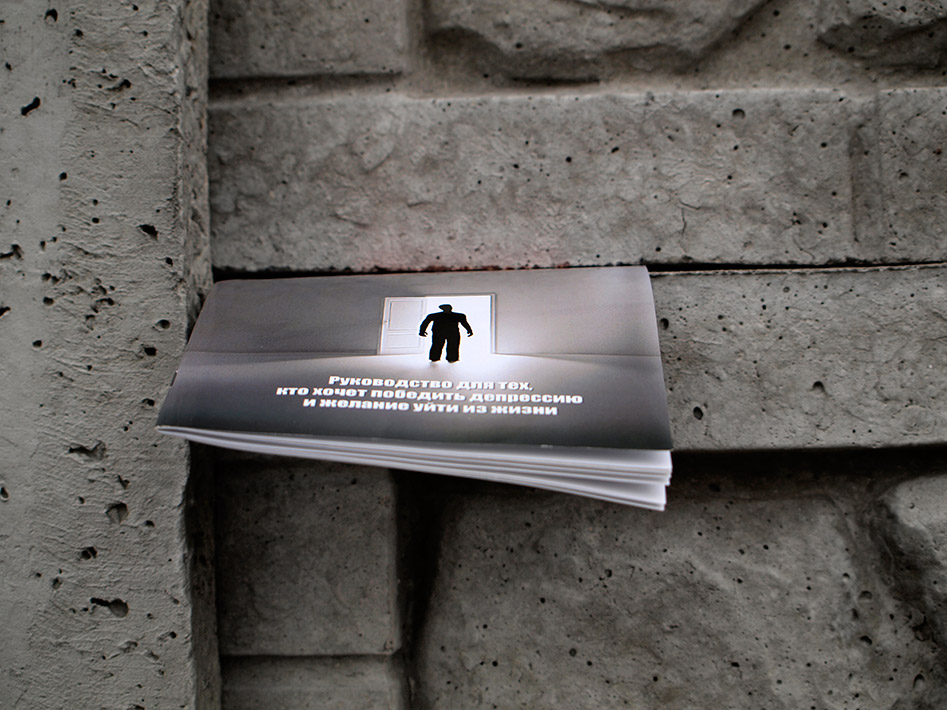 Fence in the Mira (Peace) Street

I am eavesdropping a fragment of the conversation and try to continue it, but the man only shook his head and repeated: "I do not know." Then I find out that he has been at the front for two years. At first, he was mobilized. Then he came back as a volunteer.

- What do they say when this will be all over? - asks a soldier in one of the bunkers overlooking the building of "stud farm" on the outskirts of Donetsk that is occupied by "republic" militants. – We’ve got only Oplot TV here ...

- They say that the conflict is going to be frozen.

- But this is not the Transnistrian "freezing" but the Karabakh "freezing". Then they do not stop shooting ... 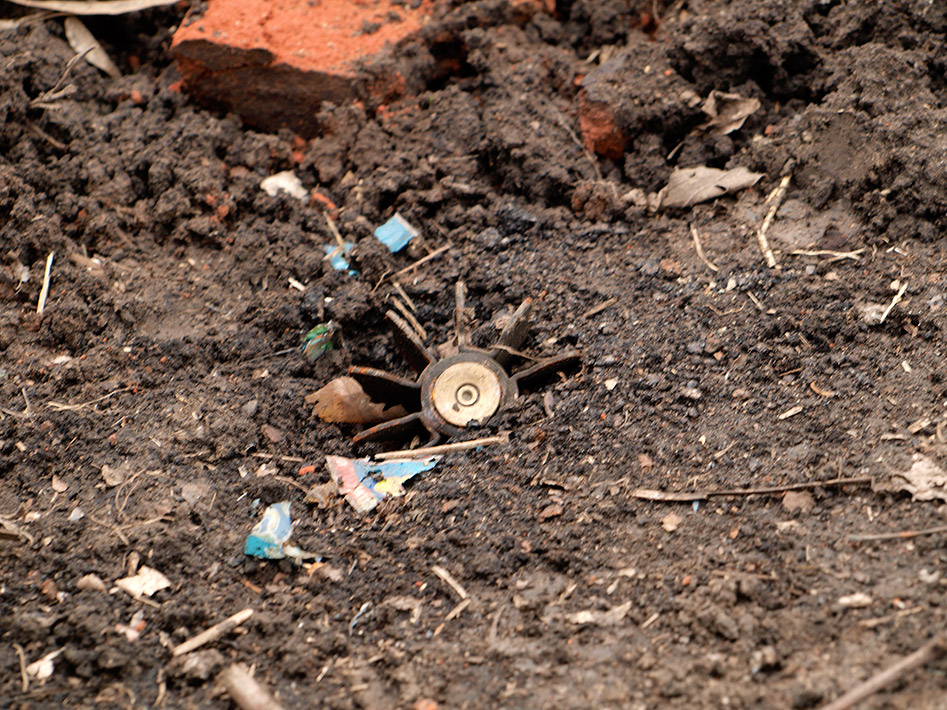 Unexploded mine, which fell close to the trenches 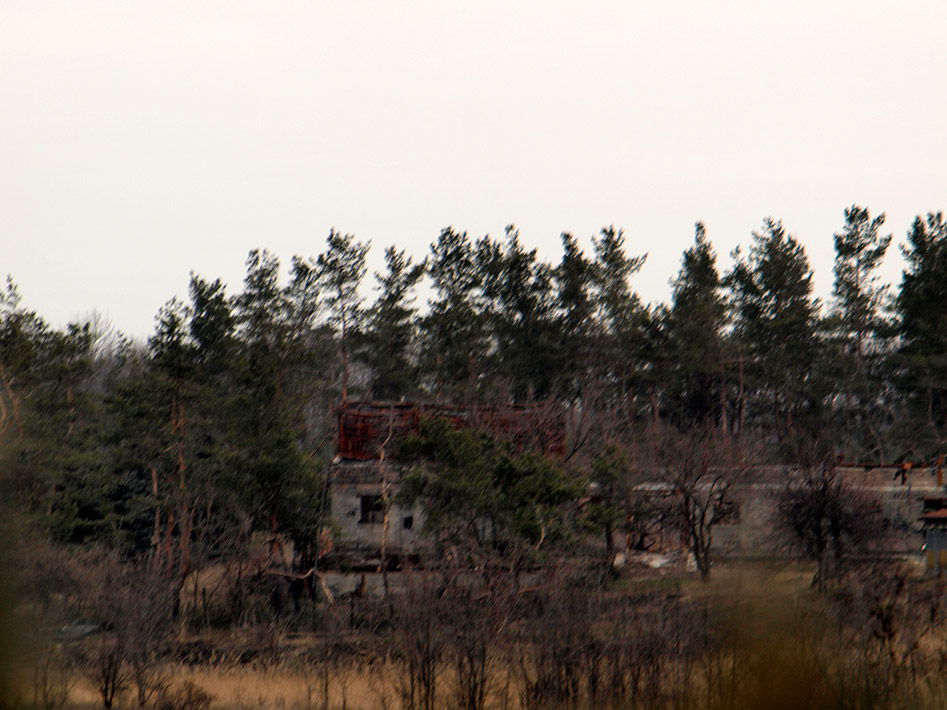 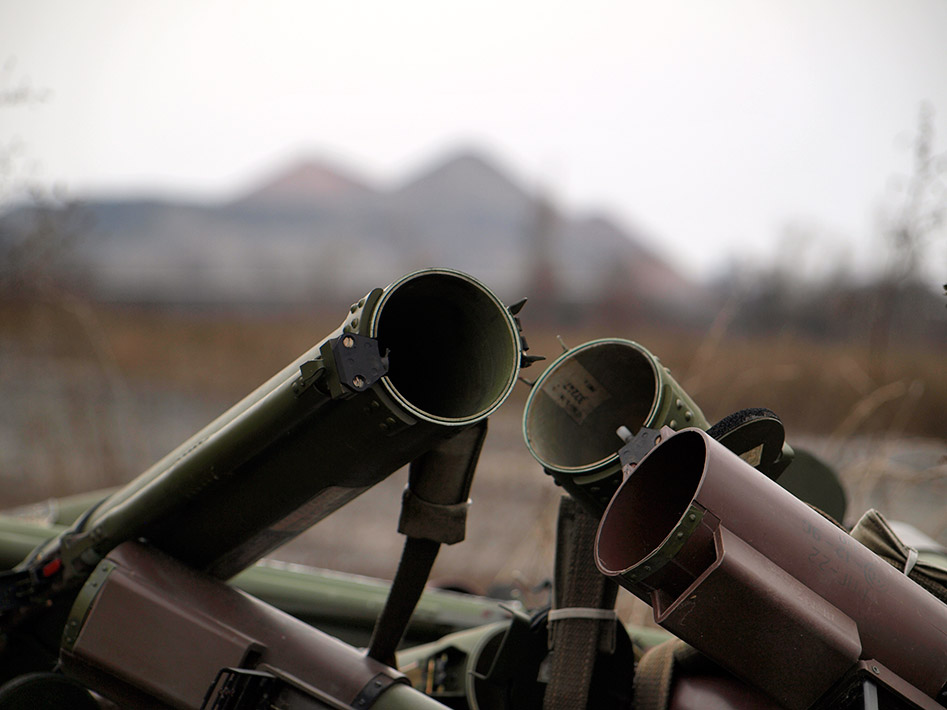 Outskirts of Maryanka. Slag heap on the background - position of the Donetsk "republic". The distance between the warring parties in Maryanka is the shortest in the "ATO area".

It is about security, foolish bureaucratic procedures for delayed extra payments for veterans, without which soldiers in the trenches get as much as military in the rear and it's very disappointing. Most fighters have the same cheap synthetic uniform, which immediately and firmly sticks to the body when ignited.

- They were treated like cattle! - exclaimed Oleg Tkachenko during one of the conversations.

Earlier Sergey Kosyak, slumping his elbows on the table and staring into the eyes, wearily said:

- It is not true that the war brings a person closer to God. War reveals what’s in the human’s heart - it's true.

On that day they went to the base to pray with soldiers.

- They are angry, frustrated, - said Kosyak.

All are disappointed. The participation of regional authorities in the life of the city boild, by and large, to the delivery of Kramatorsk "Combat leaflets", "Vesti Donbasa" with reports that somewhere some infrastructure is restored and a photo of the smiling head of the Donetsk Regional State Administration on the first page. I didn’t see anyone even touch this newspaper.

Presence of the central power isn’t felt at all. Local civil administration is busy sharing the budget with the military administration. Orthodox priest cannot share the flock with Protestants. Now even Oleg Tkachenko began to receive threats because of the bakery under construction. Wherever you turn around, you affect someone's interests. Even in this bullets-stitched half-dead city. 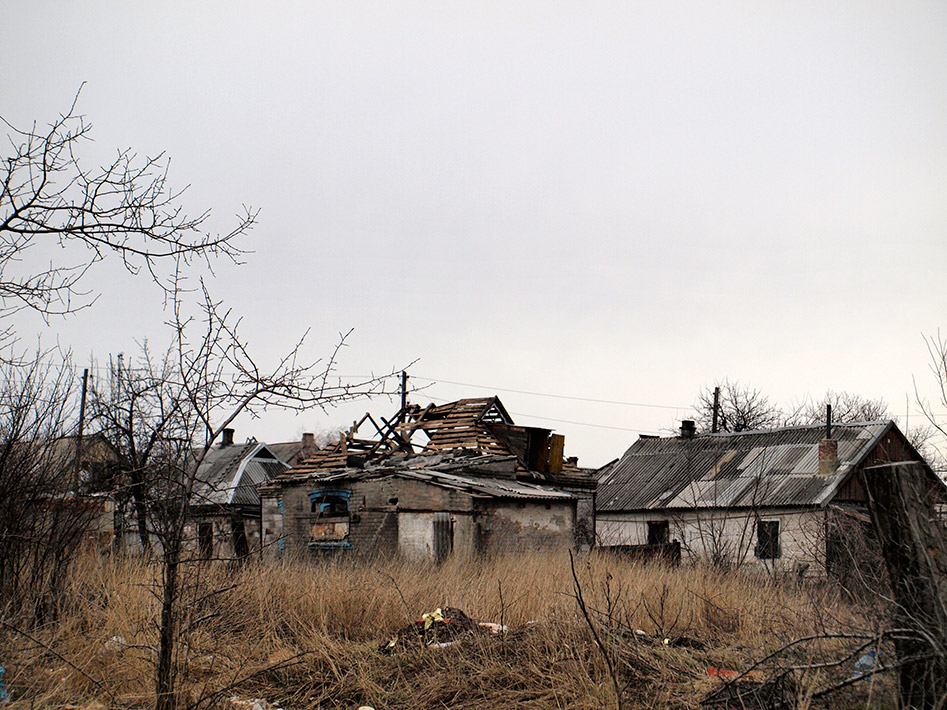 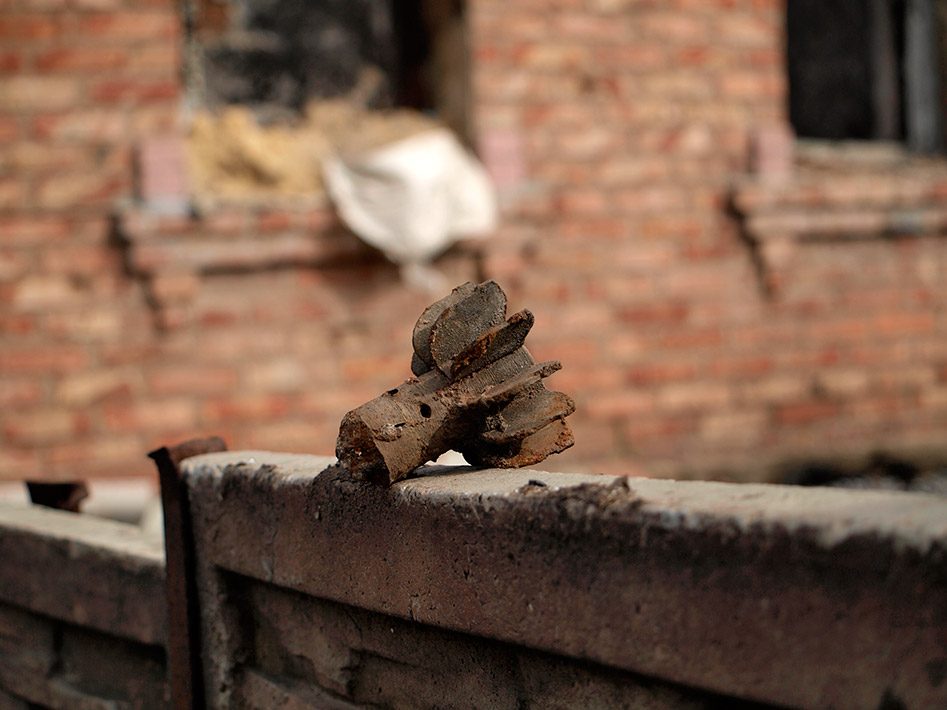 Shank mines that hit the wall of the summer kitchen. The house burnt down after kitchen 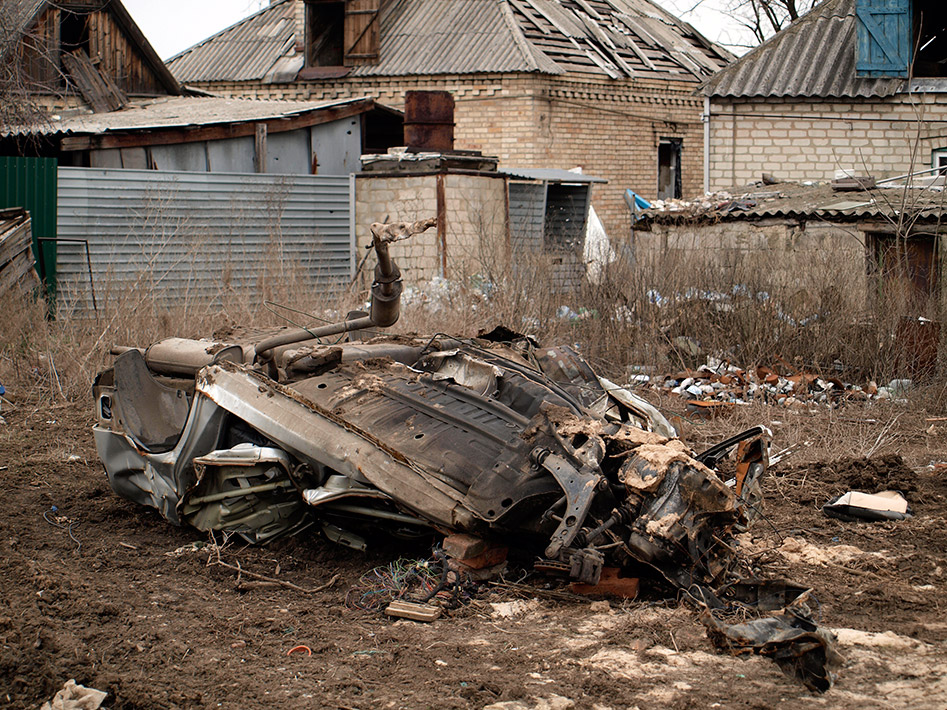 A car with two locals, a father and a son, drove over a mine in November last year

Nobody likes Maryanka more than Irina.

- If you only knew how many roses had been here before. More than in Donetsk! A friend of mine came here for the first time and then told everyone that there was no city in the world more beautiful than Maryanka.

- Was it before the war?

Irina also tells about former Karpovy mansion here - the first Donbass landowners, industrialists. What a pity that we know little about that history, she says. The Soviet government did everything for us to forget it. And now Lenin is destroyed everywhere.

- Our Lenin was removed from the pedestal too, then placed among the trees, all took photos with it there. I instructed the soldiers: "Guard the Lenin!". They laughed. And then someone stole it ...

What will the future history of this city be like? Today, no one even knows for sure what power will be here tomorrow. Many locals refuse to speak in front of cameras, they are afraid of revenge of Donetsk.

Irina is one of the few who do not wish strongly and wholeheartedly the Donetsk "republic" to come to Maryanka.

- There was only one, walking through the market and campaigning for a referendum. "Here, - he says – will be the DPR." And I told him: "Do not hurry ..." - she laughs.

No "DPR" was established in Maryanka. There were not many for Maryanka to be liberated from. It was enough to carry out a small local cleansing. Instead, "Grads" were falling on sleeping Maryanka in the summer of 2014.

- I cannot forgive that Ukraine was the first to shoot, - says quiet and serious girl Anya.

- Was life normal when the "DPR" was here?

- We almost didn’t see them. But I want to say that there was no looting when the "DPR" was here.

- They just didn’t live like in Slavyansk, otherwise they would not say that, - told me later Oleg Tkachenko, a witness of the siege. - But it turned out that Ukraine was actually worse for them than the "DPR".

In the car we spoke again about the disappointment, shame for the new government with its grasping reflex, Oleg’s faith in his community and in the ability of people in the field to change the country, and one of the rare gaps in this gloomy everyday life - Maryinsky bakery.

Kramatorsk lying forward with its evening lights will seem to be Las Vegas after windows of tiny one-story Maryanka hidden behind the cinder block.

All the characters in this story, except for Sergey Kosyak and Oleg Tkachenko, for the sake of their safety are mentioned under false names.

Wednesday, January 27
Every second resident in Ukraine falls below poverty line - Institute of Demography of the National Academy of Sciences of Ukraine
Putin and Biden have serious differences over Donbas - Peskov
What Russian concentration camp in occupied Donetsk looks like: first photos posted
Tuesday results in the occupied territories of Donbas. The highlights
Tuesday, January 26
People power in action. Rada adopts law on an all-Ukrainian referendum
Ukraine not to buy gas directly from Russia - Shmyhal puts the lid on the matter
"DNR" occupiers state they will not allow Ukraine to carry out any repair work on contact line
Monday results in the occupied territories of Donbas. The highlights
Monday, January 25
Israel's experience: mayor of Mariupol believes that city airport can resume flights
Friday, January 22
Six years of shooting of stop in Bosse microdistrict by "DNR" militants: occupiers cynically remember the dead (PHOTO)
Heidi Grau deprives "public advisers" from "DNR/LNR" in TCG of right to vote on behalf of OSCE - Harmash
Russian "curator of the Ukrainian issue" Kozak actually admits illegitimacy of Minsk agreements - Harmash
Thursday results in the occupied territories of Donbas. The highlights
Thursday, January 21
Head of OSCE visits checkpoint in Zolote
"DNR" leader: There will be no local elections until "special status" embodied in Constitution of Ukraine
All news »