These Soviet slogans, which the "liberators" put in the heads of young people from Donetsk, are so tiresome.

Why the young ones? Because those, who were born in the Soviet Union, made their choice a long time ago: to move forward or to freeze in time.

It was those who were unable to accept progress who made their "invaluable" contribution to the destruction of Donbas. In 2014, they thoughtlessly shouted in the squares that they were from the USSR and their home was russia. It was they who, with a pioneer gleam in their eyes, were waiting for the "russian world" and cheap sausages. And then they vehemently tried to prove to their acquaintances, who lived in cities controlled by Ukraine, that life was great here, because the utilities were free and they received two monthly pensions.

However, their number significantly decreased later on. Some passed away, and some realized that something went wrong with this "russian world".

But the past cannot be changed, and now their sons and grandchildren, who were massively sent to “fight the Ukrainian Nazis”, are paying for their mistakes.

In February, as soon as the kremlin announced the start of the "special operation", the notorious posters were plastered all over Donetsk, where a mother with a formidable face calls for the defense of the Motherland during World War II.

However, an attempt to appeal to the patriotic feelings of young people, who, in their opinion, should have stood side by side to defend the Motherland, did not work in the 21st century. Men preferred to hide, and the unlucky ones went to war without much enthusiasm and looked for any excuse to return home. They shot themselves in the leg, pretended to faint, and sincerely rejoiced if real symptoms of a serious illness began. For example, of a gastric ulcer.

Those who had poor acting skills or good health were waiting for a vacation. Only few of them did not take advantage of the opportunity to "vanish" during the 5 days they were given to visit their families and relax. They simply did not return to the place of "service". Their families rented apartments for them, so that they would not be found at the place of registration.

Surprisingly, no one was looking for the fugitives. They did not visit their homes and did not interrogate wives and parents of the fugitives. Perhaps they received a call from a military unit or military enlistment office, but their SIM cards have already been removed and thrown away.

Before the “incorporation” of the “DNR” into the russian federation, it was much easier to vanish indeed. Some "vacationers" even managed to cross the border. The most difficult thing was to cross the "DNR" checkpoint. Then they could end up in any part of the world via Turkey or to stay in russia.

The fee for smuggling deserters out of the "republic" started from $5,000. But none of the "carriers" guaranteed a 100% positive result. However, there were many who wanted to take a chance. If the fugitive was caught, he faced imprisonment of up to 7 years. However, men who had been to war, preferred to sit it out in prison rather than to return to the front.

Those, who did not have time to leave the "republic" before October 1, are now in a stalemate. They have only one option: to hide in rented apartments. And only God knows for how many months or years. And now they are being looked for. Relatives of the mobilized ones (who were supposed to return to the unit in May or June) say that the military commandant's office representatives come to them and ask where their sons or husbands are.

The term of imprisonment for evading military service or desertion has already been increased to 10 years. To instill more fear, informational letters are posted on bulletin boards, in which they call on evaders to return to their military units. And, characteristically, the text of these announcements is written in the stagnant Soviet times style: "Russia does not need deserters!", "The deserter is not our friend!". 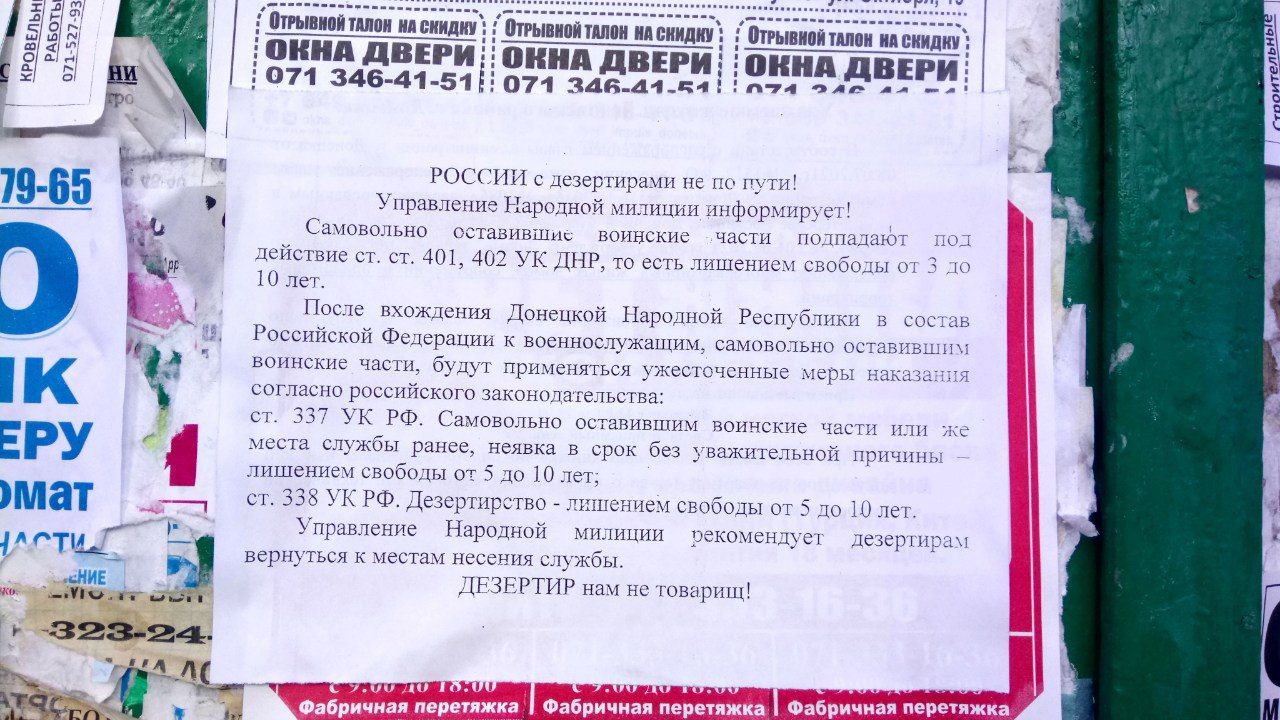 The most disgusting thing in this situation is that school teachers are forced to look for deserters. They call their students and ask where their father is now. I am sure that they will not find “Pavliks Morozovs”, but it is likely that some parents of first-graders did not warn their children about the secrecy of information that "dad lives in another apartment now". And if the father is "caught" after that, then how can the child continue to live with such a burden of guilt?

I would like to believe that the child's mind will withstand all this onslaught of stupidity and cynicism and will not deform under the "russian world".