The Ministry of Economy will return to the revision of Ukrainian foreign trade agreements. Trade Representative of Ukraine and Deputy Minister of Economy Taras Kachka announced the continuation of negotiations on expanding the bilateral agreement on a free trade area (FTA) with Canada during an online conference with representatives of Canadian business on April 20.

An FTA agreement with Canada was signed in 2016 during the presidency of Petro Poroshenko. Within the framework of this document, politically friendly Canada did not remove duties on Ukrainian goods at all, having agreed to establish only (small) duty-free import quotas for them.

For example, Canadians left a protective duty of 183.05% for Ukrainian producers of dairy products, 213.78% - for Ukrainian chicken meat, etc. Such a strange "free" trade turned out.

Rhetorical question: can a Ukrainian producer sell chicken meat in Canada if he has to pay 2 prices for this meat at the entrance? That is, it appears to be 3(!) times more expensive on the Canadian market than for local manufacturers.

Whereas the Ukrainian side readily removed duties on imports of Canadian goods. For some – right away. For others, a transitional period of 3-7 years was set. That is, fees for Canadians are zeroed during this period.

It is good that due to its geodistance, Canada is not among the main trading partners of Ukraine. That is, the losses here are minimal compared to those that the Ukrainian economy suffered from the Free Trade Area with the European Union.

Nevertheless, there is no doubt that the agreement with the Canadians needs to be corrected. And in November 2021, the Ministry of Economy of Ukraine announced the upcoming negotiations on this issue.

Then in January, Prime Minister Denys Shmyhal stated at a meeting with Canadian Foreign Minister in Kyiv that signing of a new FTA agreement with Canada is among the foreign economic priorities of the Cabinet of Ministers for 2022. In particular, the document is expected to be expanded to include services and investments.

The February invasion of the russian military caused these plans to be temporarily postponed. T.Kachka has now confirmed the return of the issue to the agenda. However, according to the trade representative of Ukraine, negotiations will continue after the war. The end of which, in fact, is unknown.

It is quite obvious that waiting for the end of the war in this case would be a huge mistake. Because economic diplomacy is no less important than the political one.

Not by credit alone

In conditions when Ukraine successfully resists the aggressor, it needs more than just words of support and weapons from its allies. The importance of the economic component is well understood by President Volodymyr Zelensky, who created the National Council for the Recovery of Ukraine from the Consequences of Warby his decree of April 25.

Among the tasks of the Council are the restoration and development of transport, medicine, energy, and military-industrial complex. As well as social, communal, industrial, communication infrastructure and housing, restoration and preservation of cultural and historical sites.

The Council should ensure structural modernization and restart of the economy, overcoming unemployment, measures to support families with children and those in need, incl. people who found themselves in difficult life circumstances because of the war.

Achieving the above goals is impossible without improving foreign trade conditions for Ukraine. Before the war, they were, to put it mildly, not very favorable. The trade balance of Ukraine was constantly reduced to a minus. Only the shock devaluation of the hryvnia from 12 to 29 hryvnia/$ brought it to the plus side for a short time. 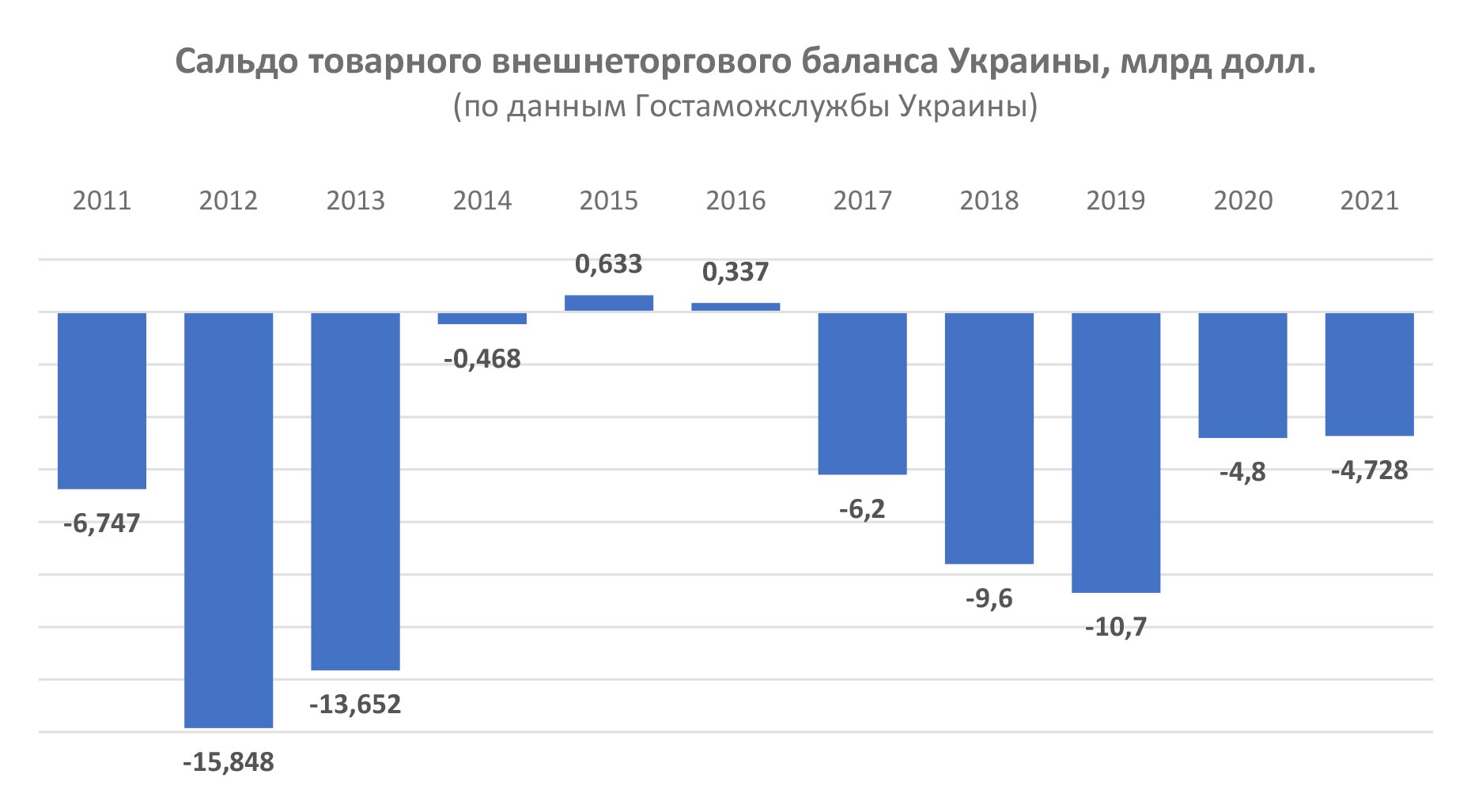 This means that every year, the national economy lost billions of dollars in foreign trade operations. The main reason is raw material export model. Which is largely due to the terms of foreign trade agreements signed earlier.

Starting from the absolutely unfavorable agreement of 2008 on joining the World Trade Organization (which President V.Yushchenko insisted on) to the equally unfavorable free trade agreement with the European Union of 2014 (which P.Poroshenko agreed to).

But the European Union has set an excellent example for other Western partners in this regard. In the context of the russian military invasion of Ukraine, the European Commission announced on April 27 the abolition of all duties and quotas on the import of Ukrainian goods (so far, for a period of 1 year).

A day earlier, on April 26, the UK government announced the relevant decision. In an official statement from the Boris Johnson administration, it was noted that the decision was made at the request of V.Zelensky.

And now the task of Ukrainian diplomacy is to ensure that the rest of the G7 and G20 countries make similar decisions in the near future. Above all, the USA.

Even before the russian invasion, Ukrainian metallurgical enterprises repeatedly appealed to V.Zelensky and D.Shmyhal with a request to facilitate the exemption of Ukrainian steel products from paying an additional duty of 25% of the customs value for deliveries to the USA.

This duty on all steel imports was introduced in May 2018 by then-president Donald Trump to support the American steel industry.

However, then his administration managed to cancel this duty for a number of countries – political allies of the USA. South Korea, Australia, Brazil, Taiwan, Mexico and Canada are among them.

Further, under current President Joseph Biden, similar decisions were made regarding steel products from the EU, Japan and the UK. Moreover, these solutions are quite fresh. For Japan, it entered into force on April 1 this year; for the UK, it will begin to operate from June 1.

Therefore, even without taking into account putin's war against Ukraine, official Kyiv could reasonably claim the abolition of the American additional duty. And in the conditions of war, the remaining Ukrainian manufacturers have the right to count on the absence of quotas for deliveries to the USA. Because, unfortunately, there are not many of them left. These are ArcelorMittal Kryvyi Rih, Zaporizhstal, Dniprospetsstal, Kametstal, Dniprovskiy Metallurgical Plant, pipe plants in Nikopol, Dnipro and Novomoskovsk.

Their loading with American orders will support the Ukrainian economy much more than regular loans (which will later have to be repaid with interest). Suffice it to say that before the war, metallurgy provided 23-25% of all foreign exchange earnings in the country.

This is just one example of the wide opportunities for economic assistance to Ukraine, which have not been activated yet. But they are much-needed.

It is important to note that it was under V.Zelensky that Ukrainian economic diplomacy finally became what it should be. That is, effective and in line with national economic interests.

So, shortly before the war, on February 3, Ukraine signed an agreement on an FTA with Turkey. A brief analysis of the document allows us to say that the current Ukrainian officials have finally stopped "leaking" the country's economic interests to their partners for the sake of imaginary political gain. As it was, unfortunately, under V.Yushchenko and P.Poroshenko.

So, within the framework of the agreements, Turkey removes duties for more than 10 thousand commodity items on deliveries from Ukraine, opening up 95.6% of its market.

We open more, 99.6% of the market. But at the same time, duty-free import applies to a smaller number of commodity items: 9.5 thousand tons.

It is very important that duties for Turkish light industry products imported into Ukraine will be reduced gradually over 4 years – i.e., a transitional period is provided.

And the possibility of providing state support to Ukrainian clothing and shoe factories is stipulated separately.

This (if appropriate decisions are made by the Cabinet of Ministers) will allow our producers to compete with the Turks on equal terms. Since they are conquering new markets just thanks to the export state support.

The issue of export duties on Ukrainian grains was taken out of the framework of the free trade agreement.

As noted earlier, the Turks buy up Ukrainian grain and process it into flour, which they then sell on foreign markets – making a good profit.

At the same time, nothing prevents us from producing more flour ourselves and exporting it. Instead of letting someone else to earn. In this case –Turkish business.

So, the Turks failed to achieve a ban on export duties on Ukrainian grain.

Ukraine also retained the right to limit the export of steel scrap with duties, which is now used by Turkish metallurgical plants. Since Ukrainian steel plants also need this scrap.

Therefore, it can be said that as a result of signing of the FTA agreement, Ukraine will not turn into a raw materials appendage for the Turkish economy. As it happened earlier in the FTA with the EU.

This case allows us to reasonably hope for success in negotiations with the USA, Canada and other countries from the G7 and G20 regarding the improvement of trade conditions for Ukraine. Especially in the context of the ongoing war.

This is especially important in the context of the ongoing naval blockade of Ukraine by the russian military. For this reason, the possibilities of the FTA with Turkey can hardly be used now – since trade went through the Black Sea ports.