The decision of the "DNR" authorities to allow Ukrainian citizens to enter the occupation zone through the Olenivka checkpoint solely according to the lists drawn up by a certain "operational headquarters" raises many questions.

The self-proclaimed authorities "officially" stated that this measure was taken "because of the situation with the spread of COVID-19 virus" and the desire to prevent its "export" from the controlled territory of Ukraine. Allegedly, it is thanks to the reliable "cordon sanitaire" that the situation with coronavirus in the "republic" is being kept under control.

It is no question that the victorious reports voiced by the occupation authorities should be believed by a long stretch of the imagination. Most likely, the total number of cases is regularly underestimated and the number of those who allegedly brought the virus from the controlled territory for propaganda purposes is overestimated. However, even crafty figures clearly demonstrate the inconsistency of the separatist myth that the "iron curtain" on Olenivka secures "the republic that is successfully coping with COVID-19". OstroV's insiders in Donetsk and Luhansk report overcrowded departments of infectious disease and a catastrophic shortage of artificial lungs.

In order to accuse Ukraine of "exporting" coronavirus, local propagandists began to put information into the mouths of representatives of the "Ministry of Health" that a significant number of infected citizens regularly enter the free territories of Ukraine. News that carriers of COVID-19 are infiltrating through the contact line in CADO in an endless stream appears in the local media almost every day.

For example, the occupiers report in the next summary that "according to the studies conducted on July 28, 41 cases of COVID-19 were recognized, of which 16 cases were diagnosed in those who arrived from Ukraine". Thus, according to the Ministry of Health, the "export" from Ukraine is 39%! And in total, allegedly, more than 50 patients with coronavirus who crossed the line of contact stay in the "republic".

The "DNR" leader Denis Pushilin pretended to believe in this statistic. "Cases of infection with the COVID-19 virus are detected in every group of people arriving in the self-proclaimed "Donetsk People's Republic" from the territory controlled by the Ukrainian authorities", - he stated.

"We open the border with Ukraine twice a week (checkpoints on the line of contact - OstroV) and we detect the infection with coronavirus every arrival of people. They are isolated here in our outpatient department. If they had come every day without lists, we would have been "drowned", - Pushilin justified the line of "the party and the government" on strict restrictive measures on entering the occupation zone.

Of course, it would be possible to dismiss the horror story imposed by the occupation authorities, designed to prove that fellow countrymen who come from the free territories are potential carriers of the infection. However, if you read the messages of the occupation authorities not even between the lines, but just carefully, you can come to the conclusion that it was the "filtration camps" created in the "DNR" for two-week observation that actually turned into a hotbed of infection.

For example, here is the news from July 31: "Coronavirus infection of a new type was diagnosed in the territory of the DNR in 23 people over the day… Of these, five cases of the disease were found in people who arrived from the territory controlled by Kyiv on July 17". So, on July 31, on the 14th day (!!!) of compulsory observation, five prisoners of the local hospital, who were already going to return home, suddenly heard that they had a "Ukrainian version" of COVID-19.

At the same time, the suddenly declared sick were reported that they did not have any symptoms of coronavirus: the "evacuation crew" just loaded them into buses and took, allegedly, for treatment to the satellite cities remote from occupied Donetsk.

When the "DNR" authorities announced their observation program, they promised that all those sent to isolation would be tested promptly. Here is what head physician of the Donetsk Central City Clinical Hospital No.20 Vasiliy Grebeniuk, who was the first to receive observation of 35 patients who arrived to CADO from the territory controlled by Kyiv, told about it: "A department for 60 beds has been organized on the basis of our medical institution to undergo observation by people who have come from the territory of Ukraine… Everyone is examined by a therapist upon admission, the tests are prescribed: PCR-based diagnostics (test for coronavirus), complete blood count, in some cases, blood glucose test and others". He clarified that the results of the first test for the virus would be ready within a few days. Not two weeks!

Naturally, they promised decent conditions of stay in quarantine and a happy release after 14 days of complete isolation. As they say, to freedom with a clear conscience and a negative test. But it was just on paper: on the very first day of "finding the homeland", it turned out that, despite all the bans, more people broke through to the occupied part of the Donetsk oblast than there were prepared beds in quarantine medical institutions. We are talking about citizens who were not included in the entry lists, but who starved out the occupation authorities and were eventually allowed into CADO.

"At first, they were placed in the tents of the "Ministry of Emergency Situations of the DNR", - their misadventures are described on social networks. The photographs from these tents clearly show that people are gathered in a cramped room, there is no question of any social distance and, moreover, observance of the mask requirement. One COVID-19 carrier is enough to launch a chain of the uncontrolled infection under the conditions of such overcrowding. 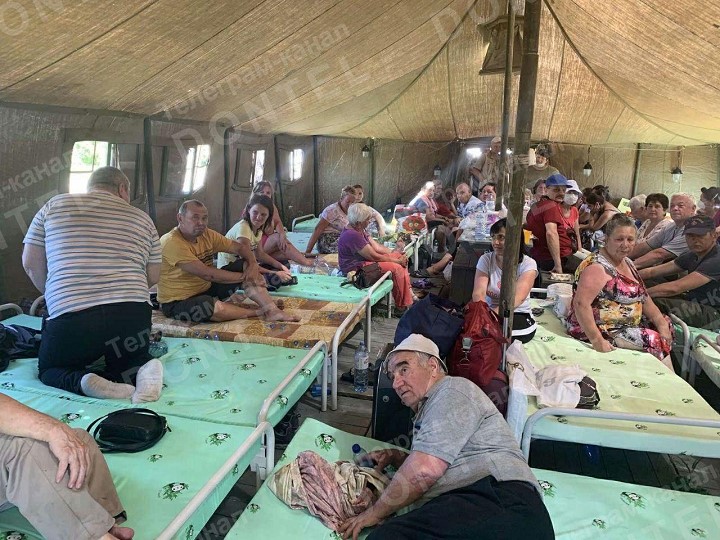 It should be admitted that such an extreme observation did not affect everyone, and in the end, most of those who were graciously admitted by the occupation authorities to the territory under their control during a month were nevertheless placed in various medical institutions of the "republic" adapted for hospitalization. Truth be told, the observation rules provide for maximum isolation, but as the Russian journalist of Komsomolskaya Pravda wrote, "there is a limit to the resources", therefore "people are place in wards by four, which means that if there are cooperative ones among them, the infection is inevitable".

Eyewitnesses who had the misfortune to get on the observation report that the situation is even sadder.

The hell begins already at the Olenivka checkpoint. At first, all those who entered are kept waiting for several hours in the bus, which is closed and not ventilated. Then they are taken to the observation sites.

"Epidemiologic rules in the clinic where the newcomers are placed are not fully observed. People live by 5-8 persons in the ward, do not wear masks and contact each other without them even in the canteen. Medical staff does not monitor this and often works without means of protection as well. It is very easy to potentially spread the virus in such conditions", - the eyewitnesses share their impressions on social networks.

Many people point out that there is only cold water in, again, common to all showers on the floor, so you have to wash from a bucket with hot water brought from other departments. So it is more than incorrect to say that those who came from the free territory of Ukraine brought a dangerous virus with them, and did not get it at the observation sites.

Meanwhile, there is another explanation for a large number of citizens who allegedly brought coronavirus from free Ukraine - the corruption one.

Information that "returnees" with cronyism or money are leaving the observation sites ahead of schedule has repeatedly appeared on social networks. The doctors explain that they allegedly had a positive test result and were transferred to another hospital. In fact, the lucky ones get early release. "According to our information, a young man and a middle-aged woman "left" from the Makiivka hospital No.9. They specified in the forms that they had returned from Poland and Germany. Medical workers in biohazard suits arrived at the clinic, told everyone to stay in their wards and taken away the above-noted citizens within an hour. There is no exact information about where and what for they were taken, but people said that "the man and the woman could get their documents back for a price and go home", - the author of the Dontel telegram channel writes.

Finally, it is worth saying a few words about the situation with COVID-19 in the "republic". The occupation authorities assure that everything is bad in Ukraine in this respect, therefore, entry to the "DNR" will remain restricted for a long time.

Well, an inferential question in conclusion: If you do not open the checkpoint, because you do not want infected people to come to you, then why do not you open them at least in one direction - to leave?... Maybe, after all, not coronavirus is the reason for the isolation of CADO residents from Ukraine.