Population of CADO is reduced by pseudo-vaccination with investigational drug
12/02/2021 18:07
Home
Articles
Politics

Participation of the President of Ukraine in past events in Poland, dedicated to the commemoration of victims of the Holocaust, virtually zeroed all his efforts to establish relations with his Russian counterpart Vladimir Putin. The Kremlin talked about establishing sustainable contact just a while ago. However, after Zelensky's statements that the "two totalitarian regimes" unleashed World War II, a black cat ran between the leaders of the two countries. Putin's spokesman Dmitry Peskov unequivocally stated that relations between Kyiv and Moscow are "far from normal" today given the statement by Ukrainian President Volodymyr Zelensky about the role of the USSR in World War II. He specified that Zelensky's remarks are "extremely insulting" to "tens of millions of Russians and citizens of the CIS countries, whose parents, grandfathers and relatives gave their lives for the liberation of Europe from fascism".

Meanwhile, no one questions the feat of representatives of all the republics of the former USSR, who selflessly fought against the fascists, and does not accuse them of starting a war. It is another matter that the Soviet leadership entered into a secret alliance with Nazi Germany behind this very "Soviet people", which resulted in the division of Europe into spheres of influence between Stalin and Hitler.

The existence of secret additional protocols to the Molotov-Ribbentrop Pact has long been known in the West, but the originals of this document did not survive – only film copies of the German copy of the protocol were available. It was based on them that during the years of Perestroika, the USSR recognized the responsibility of leadership of the USSR for unleashing World War II. After a speech by chairman of the special commission of the CPSU Central Committee Alexander Yakovlev in 1989, the Congress of People's Deputies of the USSR adopted a resolution which noted that negotiations defining the spheres of influence in Europe condemned to the occupation were conducted by Stalin and Molotov "secretly from the Soviet people, the Central Committee of the All-Union Communist Party of the Bolsheviks and the entire party, the Supreme Council and the Government of the USSR". In other words, ratifying the Molotov-Ribbentrop Pact, even obedient deputies did not realize that they bless the joint aggression of the Soviet Union and Germany against Poland that way. "The protocols were removed from the ratification procedures. Thus, the decision to sign them was essentially an act of the power itself and did not reflect the will of the Soviet people, who are not responsible for this conspiracy", - the congress resolution said.

Undoubtedly, the absence of the original protocols and reliance solely on German film copies, despite the graphological, phototechnical and lexical examinations, cast doubt on the authenticity of these agreements. However, the researchers finally gained access to the secret folders of archive of the General Department of the CPSU Central Committee in 1992, and the original of secret protocols was presented to the general public and replicated in historical specialized journals and socio-political media. It would seem that the publication of secret supplement to the Molotov-Ribbentrop Pact put an end to the question of who exactly unleashed World War II.

However, the events following signing of the Pact and additional secret protocols were even more vivid confirmation of the responsibility of Nazi Germany and the totalitarian Soviet Union. They fully developed according to the scenario signed by the foreign ministers of the two countries - Molotov and Ribbentrop.

So, the two dictators agreed to divide Eastern Europe, and their first victim was determined. The non-aggression pact with Germany was ratified on August 30, 1939, and the very next day, September 1, German troops invaded Poland, a few days later, England and France, related to Poland by mutual assistance treaties, declared war on Germany. Thus, World War II began.

The fact that the Soviet Union did not bring its troops into Poland immediately after Germany caused some bewilderment among the leadership of the latter. Ribbentrop literally bombarded Molotov with telegrams asking: why is the USSR lingering? Is it going to fulfill its part of the agreements? When will the Red Army enter Poland? In response, Molotov told his worried German counterpart that the Soviet Union would fulfill its commitments, but only after Warsaw fell and German troops reached the line of separation of spheres of influence along the Narew – Vistula – San riversб specified in the secret protocols. These conditions were met by September 17: Warsaw was under siege, Polish government left the country, and the Wehrmacht troops not only reached the agreed milestone, but even got across it 50 - 80 kilometers in some places in their blitzkrieg thrust. Then Soviet troops entered Poland. A joint Soviet-German operation to eliminate Poland began.

The fact that this was namely joint operation is evidenced by the published correspondence of the Nazi leadership with German ambassador in Moscow Werner von der Schulenburg. He regularly reported the essence of his conversations with Molotov to Berlin. The fascists, in particular, confirmed that "regardless of purely military operations, they consider themselves bound by delimiting the spheres of influence agreed upon in Moscow" and expressed confidence that "the Soviet government intends to march off (against Poland – OstroV) now". In turn, the Soviet party informed the "brothers in arms" that "the Red Army had reached an operational status earlier than it was expected" and was waiting for the capture of Warsaw by the Wehrmacht troops as H-hour.

Technically, the territories of the Second Polish-Lithuanian Commonwealth, which the USSR laid claim to, were mainly West-Ukrainian and West-Belarusian lands, seized in the early 20s from the then weak Bolshevik Russia. Therefore, objectively, the September 17 invasion of the Soviet troops in Poland and the inclusion of a number of eastern Polish voivodships in the sphere of "their interests" can be considered restoration of the territorial integrity of Ukraine and Belarus. We are talking about quite dubious means of achieving this goal…

That is why the Soviet leadership has taken all possible measures on the propaganda front to present joint aggression with Nazi Germany against the independent state as a "liberation campaign". On the eve of the Red Army invasion, Schulenburg telegraphed to Berlin and reported that "Molotov touched on the political side of the issue and stated that the Soviet government intends to take advantage of the further advancement of German troops to declare that Poland broke up and the Soviet Union, therefore, come to help the Ukrainians and Belarusians, threatened by Germany. The argument is needed so that the intervention of the Soviet Union is justified in the eyes of the masses, and the Soviet Union does not look like an aggressor".

The German authorities stated in response that it was not worth showing the world that the Allies saw each other as a threat, and offered to issue a joint communique in which the main reason for the attack on Poland was declared "the collapse of the old forms of government in Poland" and "the need to put an end to the unbearable political conditions in these territories".

Stalin's entourage partially agreed with a similar interpretation. The Note of government of the USSR, handed over to the Polish ambassador in Moscow, explained in detail that the Soviet troops were invading foreign territory because "Poland turned into a field for all sorts of accidents and surprises that could create a threat to the USSR". "Taking into account this situation, the Soviet government ordered the Red Army High Command to give the order to cross the border and take the life and property of the population of Western Ukraine and Western Belarus under its protection", - the USSR People's Commissar for Foreign Affairs presented the fact of the invasion as an act of fraternal assistance to "consanguineous Ukrainians and Belarusians". By the way, the blame for the attack on Poland, first by Germany, then by the USSR, in this Note fastens entirely… on the injured party. Molotov will then repeatedly declare that it was Poland who attacked Germany.

Having broken the resistance of the demoralized Polish army quite easily, the Soviet troops reached the line of delineation of spheres of influence with Germany defined by the secret protocol.

There was a joint parade of the Red Army and the Wehrmacht troops in occupied Brest after that. The troops were reviewed by corps commander, General of the tank forces G.Guderian from the German side, and by brigade commander S.Krivoshein from the Soviet side. This solemn event was called a "brotherhood sealed with blood". The parade ended with a solemn retreat of the German flag (it was Guderian's troops which captured the city) and raising of the Soviet one - Brest-on-the-Bug handed over to the Soviet administration in accordance with the delimitation of spheres of interest under the additional secret protocol to the Non-aggression Treaty between the Soviet Union and Germany. 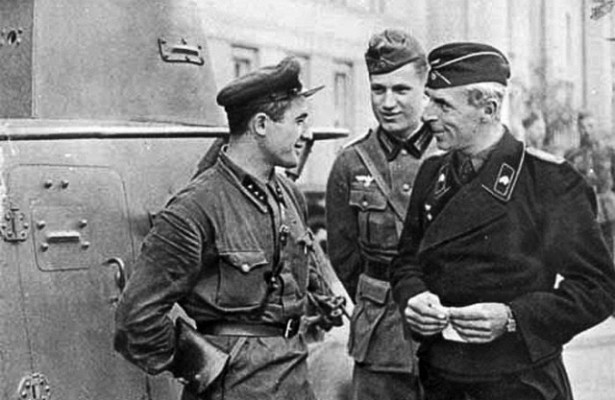 The Second Polish-Lithuanian Commonwealth was finally divided between the two dictatorial regimes and ceased to exist as a state. "The ruling circles of Poland boasted much of the "strength" of their state and army. However, a short hit on Poland from German army and then the Red Army was enough to leave nothing from this ugly brainchild of the Treaty of Versailles", - Vyacheslav Molotov stated on this subject. At the same time, he named England and France - the future allies of the USSR in the anti-Hitler coalition - profiteers of World War II. "Now, if we talk about the great powers of Europe, Germany is in the position of a state striving for an early end to the war and peace, while England and France, who yesterday opposed the aggression, stand for the continuation of the war and against the conclusion of peace", - the People's Commissar announced the official USSR position.

Another thing is that such flirting with Hitler, synchronization of military operations and even joint parades did not save the Soviet Union from the attack of yesterday's ally. On June 21, 1941, when German tanks had already crossed the border, and German planes had already bombed Kyiv, German ambassador Schulenburg mockingly handed a note on declaration of war to Molot. "We did not deserve this", - was all he said in response.

The very grandfathers, who fought, were responsible for the mistakes of the Soviet leadership for four long years. Who did not unleash World War II, did not stand at the origins of the Holocaust….