Population of CADO is reduced by pseudo-vaccination with investigational drug
12/02/2021 18:07
Home
Articles
Economy

It becomes harder to live in the uncontrolled Donbass with each passing month. The economic crisis is driving people into poverty and causes wallow. Massive non-payment of wages, job cuts and layoffs began in August. To a greater extent, the situation affected public sector workers, especially nursing staff.

Since 2014, officials from the "Ministry of Health" have openly talked about the acute shortage of staff in hospitals. According to statistics, the figure was 12 thousand vacancies in the field of healthcare (doctors and nurses) at the beginning of 2019, but the employment issue had been radically solved by the fall, having reduced existing vacancies. That would be okay if this process had not been escalated. A wage bill deficit affected the emergence of "recommendation" to dismiss medical worker of retirement age.

"Donetsk. Hospital No.6: especially ancient pensioners for dismissal, even doctors. Bedlam: employees wrote papers that they did not mind removing the allowances (if no – dismissal). Hospital No.17: the maternity home and gynecology department were closed. There is still no salary for doctors, and no one knows when it will be. They do not give gloves even to surgeons, there are no disinfectants for a long time…", - the Donetsk residents write on social networks.

Of course, not all the pensioners will be reduced, because there are almost half of all those working in medical institutions of the "republic". However, the reduction in medical staff leads to a reduction in hospital beds and even entire inpatient departments. The number of beds in the maternity home of City Hospital No.6 significantly decreased in October. The children's hospital of city hospital No.3 is next in line - they are going to close it in November. The parents of sicky children are in a mild panic from this news. They write: "The inpatient department has all the equipment: an X-ray room, a physiologic room, a salt room, a laboratory. Most importantly: excellent doctors with huge experience!.. Where can mommies with their sicky children go?"

Similar problems with a delay in salaries and reduction in the staff have arisen among miners and railway workers. But only miners of the uncontrolled Luhansk region, who have not seen salaries since mid-summer, decided to protest. The "DNR" miners and railway workers are still given a monthly wage for labor with slight delays. However, it would be wrong to say that people are happy with such a situation.

The workers share information in social groups: "The Donets Railway will give 25% of the September salary today. In total, they will close 75%. "The leadership of the Donets Railway, are you not ashamed to throw a $8 bone having a $25 salary balance and waiting for 3 weeks?".

The situation in the housing and utilities sector is even worse. There is an acute shortage of personnel here for all five years of the military conflict. The undermanning is primarily due to low salaries, which, as you know, are still not being paid on time. According to "head of the housing and communal services department" of Donetsk Valeriy Litvinov, a little more than 3600 employees work in this area, when 7 thousand people are needed. In an interview with local media, he regrets that skilled personnel left to work abroad. "As a result, only 42% of the workers remained. There is a lack of 180 people among the engineering and technical personnel. We should have two thousand 31 yard-keepers, but there are only 950 of them. That is, less than 50% of the required number. "At the same time, mainly senior citizens work here. They carry out work from one and a half to two standards".

Apparently, the lack of personnel can also explain the fact that "geysers" and "ponds", which are being formed as a result of rupture of pipes, became a frequent picture in the courtyards of residential buildings. Brigades come for emergency work a few days later and leave dug up communication structures after them, which are gradually being filled with garbage and falling leaves, and will soon be covered with snow. 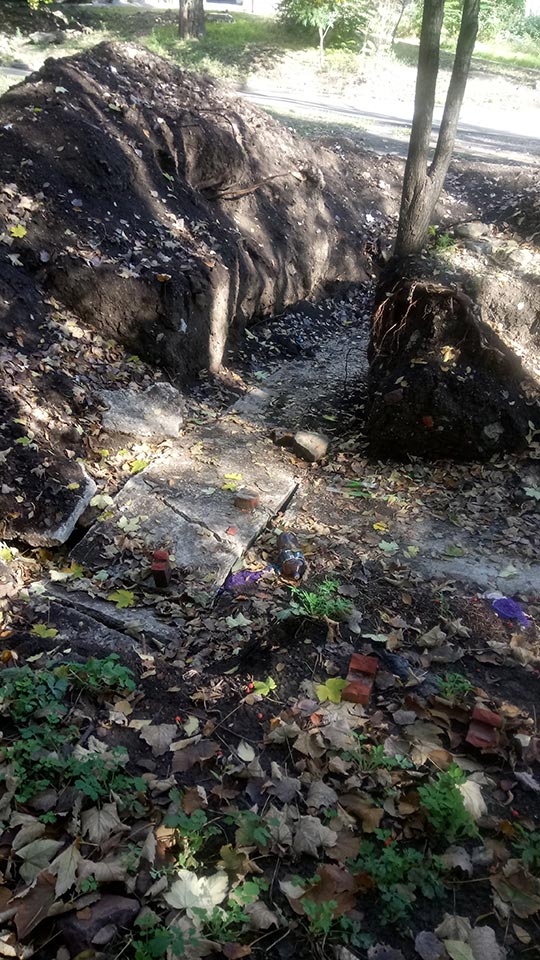 Against the backdrop of this devastation, poverty and hopelessness… the International Investment Forum was holding in Donetsk on October 29-30. The organizers of this grand event announced in the teaser ad that they had accepted the invitation from representatives of 17 countries: France, Finland, Ireland, Great Britain, Switzerland, Bulgaria, the USA, Turkey, Syria, Yemen, Tajikistan, Iran and Egypt, as well as the delegation from the Russian Federation, the "LNR", South Ossetia and the Republic of Abkhazia. They did not forget to indicate that the participants are guaranteed free two meals a day. 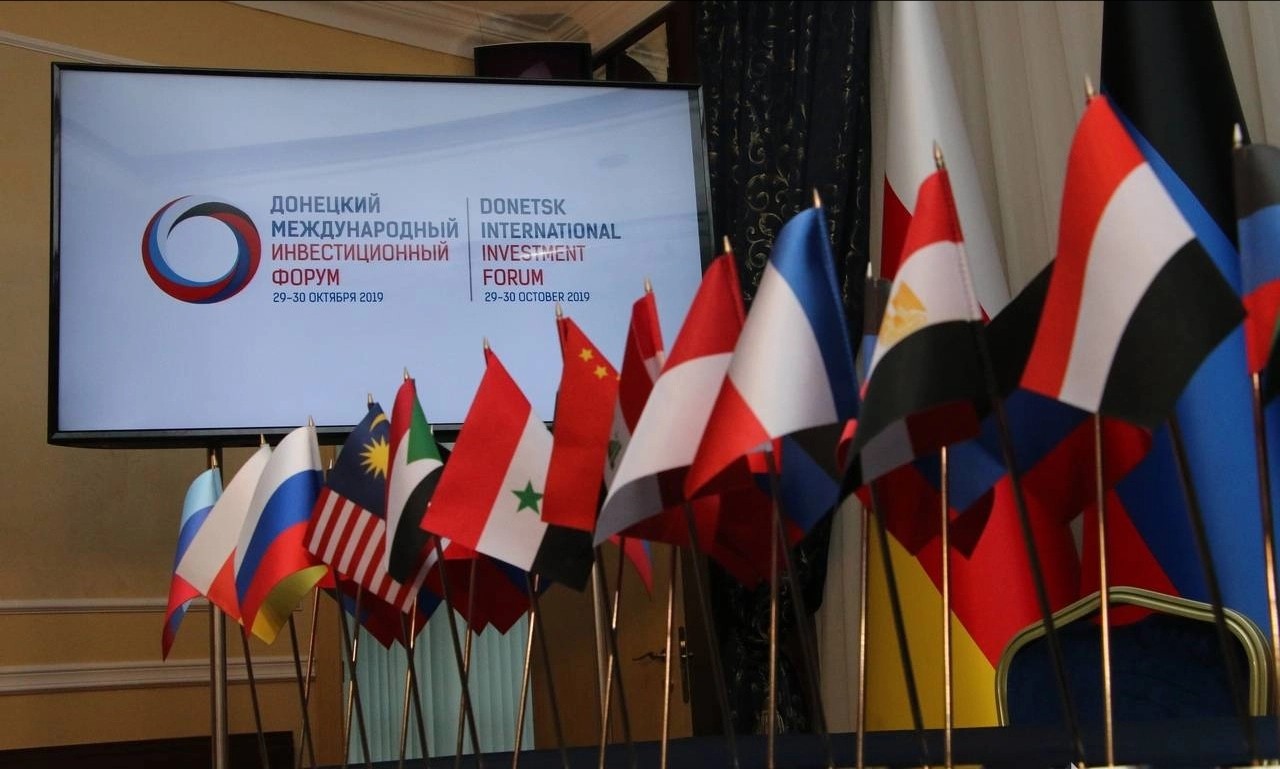 The event took place in fact. Representatives of the countries declared to participate really arrived in Donetsk and visited the exhibition of enterprises of the uncontrolled Donbass, as well as of South Ossetia and Abkhazia. They were shown the "city of roses", offered a trip to the theater and were told about the economic potential of the "young republics".

Later, it became known from the local and Russian media reports that "a number of historical agreements and intentions for further cooperation" were signed within the framework of the investment forum. The "DNR" "authorities" made a pompous statement that 34 contracts worth $2.1 billion were signed.

At the same time, all signed contracts were presented without names and company names. It is understandable - after all, the receiving party does not have a recognized status, which means that there can be no talk of official partnership. That is why it can be argued that big business will not enter the "republic" under such conditions. Most likely, the participants in the investment forum were small private intermediaries who tried to maintain anonymity, fearing sanctions, and did not disclose the size of the investments that they were ready to invest in the "DNR" economy.

Only two participants in the forum were not afraid to "open their faces" - this is president of the Association of Yemen Alumni in the USSR and the CIS countries Anwar Mohamed Ali Al-Zarafi, who owns two dental clinics and one pharmacy in the Russian Federation, and Radwan Mohamed Abdulrahim Alzimur, who was introduced as chief expert on the export of agricultural products in the Republic of Yemen, then as businessman from Egypt. They willingly shared their thoughts with the journalists that they did not see much risk in investing in the economy of Donbass and were sure that the result would not be long in coming.

The local population does not have such confidence. Maybe because the events of a similar level that took place in Donetsk before 2014 have not yet been erased from memory. Up to 20-30 exhibitions, including international ones, were annually held in the specialized exhibition center ExpoDonbass, one of the largest in Ukraine. Real investors, who did not hide their names and the names of the enterprises they owned, came here. Omitting the issue of kickbacks, they invested real money in the region's economy. The Donbass developed and moved forward with all the corrupt practices. Today, the only name of the event - the International Investment Forum - is just a mockery against the backdrop of idle enterprises, broken economy and people's impoverishment.