A simple analysis of the available Internet information about the nuclear explosion at the Yunkom mine in Yenakiieve shows that there is a lot of data, but it is contradictory. It turns out that one cannot assert with absolute certainty either the power of the explosion or its results. For example, some scientists claim that as a result of the explosion a vitreous capsule of molten rocks, 25-30 meters in diameter, was formed. And Wikipedia writes about "a cavity with a radius of 5-6 m, around which a shear zone with a radius of 20-25 meters formed". Every detail of that 1979 explosion has such inconsistencies. The most interesting thing is that Maksym Fedotov, Director General of the Directorate of the Ministry of Energy, says that the state does not have accurate data on this mine, because all the documentation remained in the occupied territory. Therefore, now, after stopping the mine in April and the beginning of its flooding, myths and unreal details were added to the topic of the nuclear threat, which makes it difficult to predict the further development of events. To understand this, OstroV met with Volodymyr Rubtsov, one of the managers of Yunkom at the times of the explosion.

He is a mining technician, had been working at the mine from 1958 to 1982. During the explosion, he was chairman of the miners' committee, then moved to the post of director of the Krasny Oktyabr mine. 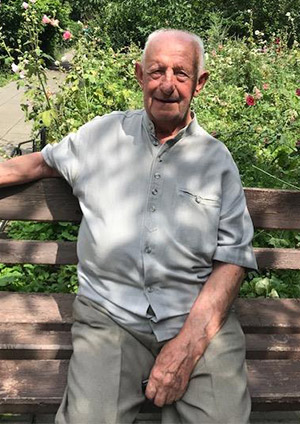 - Mr. Rubtsov, why had Yunkom been chosen for the experiment?

- Because it is the oldest mine in the Central Donbass, 915 meters deep at that time. Seams below 600 meters begin to abundantly make the gas. The mine was considered dangerous. It was planned to operate at 1250 meters deep. Therefore, the Skochinsky Institute of Mining (Lyubertsy, Moscow region - Ed.) and the Plekhanov Leningrad Mining Institute decided to hold this explosion to shake the rocks and let the gas come to the top.

The experiment began with the fact that at a depth of 915 meters, in the southern wing...

- Is it at the very bottom?

- Yes, this is the lowest horizon. In the southern wing, along the most gas-producing seam, the mine was deepened even further by 50 meters. And they made a concrete chamber there. When an explosive device was put there, it was covered with sand, cement, there were several concrete bulkheads.

- What is the point? If the explosion was purely inside a concrete chamber, then how it could destroy the seams?

- The point was that this concrete chamber should have been so shaken from the explosion that it had to create tears in the seams with its vibration.

Then, when the chamber was ready, the scientists laid a nuclear capsule inside, installed the sensors, and led the wires outside, to the top. And set a day. The whole town knew about this. Then they decided to hold an evacuation, presenting it as an exercise in civil defense. 25 thousand people (Yunokomunarivsk town , which is managed by Yenakiieve city council - ed.) were taken to the forest zone, to a health resort. There was no radiophobia at that time, it was before the Chernobyl disaster. So people took it as a holiday, everyone was partying and having fun. Well, of course, not everyone went there. Many visited their families in the city (Yenakiieve - ed.) or just went to other surrounding cities.

And thus, the explosion occurred on the stroke of 12 p.m. We felt a push, but not strong.

Academician Zakharov warned us that after the explosion, an hour and a half later, it would be raining, a heavy shower, he said the explosion would cause it somehow… And there was such a sunny weather. We were told that when the radiation is measured, we will be allowed to return home. Admittedly, the shower started two hours later, it lasted 20 minutes, and three hours later, the commission arrived and said that everything is fine, you can come back. But only two weeks later, we were allowed to work at other sites, not at the site of the explosion. Measurements were made every hour there.

- Was the experiment successful? Did it cause the release of gas?

- On the one hand, yes, the gas has decreased. And on the other - the roof cracked and when they started to pick coal, the roche began to run. Therefore, the result is mixed. But we worked till 2002 when the mine was closed. And we have already reached the level 980, but then strikes started, the closure of mines began and Yunkom was closed.

- Did the laboratory work there after the closure?

- Of course, this is an experiment, it was designed for 100 years, so the water was checked for radiation, and other measurements were taken.

- If you say that the explosion was on the bottom level of the mine, and the flooding began in April, it turns out that this radioactive capsule has already been flooded?

- And the ground waters are dynamic, can they wash out this capsule sometime?

- Of course they can. Especially taking into account what is happening there. I am informed that it was a lot of looting in this war… Everything was destroyed, the surrounding mines were also closed…

- No, Yunkom is separate, it has no connection.

- In your opinion, is it dangerous that the flooding of the mine started now?

- Well, they said it should be monitored for 100 years. But in the dry mode. I think no one knows what is in the water. And the inflow of water is crazy. When all the robbed-out workings will be flooded, it will rise to the top.

- How long do you think this will take?

- A long time. There are 7 levels. But in the course of time, if the water goes up through the shafts, there is a low land between Yunkom and Blochok (Yenakiieve districts – ed.) – everything will be drowned there.

- Was this capsule somehow examined after the explosion, or it is impossible?

- In your opinion, why this Leningrad Institute agreed to flooding now, is the outflow of radioactive water really safe for Russia? Russia is close indeed.

- It will not reach Russia. There is such a geology, higher ground. They are not afraid of this. This will be our problem.

- Have not you noticed an increase in the number of deaths in Yunokomunarivsk, the incidence of cancer?

- I do not know this. We would not have been said this at that time.

PS: in the early 90's, Yenakiieve media published the results of radiation research on the terrain, conducted by the laboratory of the state service of mining supervision and industrial safety of Ukraine. It follows that the entire city was in the zone of contamination of the Chernobyl nuclear power plant. And the strongest spot of radiation - from 100 to 150 microroentgen per hour - lies exactly on Yunokomunarivsk. But is there any connection between this fact and nuclear explosion in the Yunkom mine – still unknown.