Surkov "betrayed" the Donbass badly, now the one who will do it better is needed. Review of separatist publications
01/31/2020 12:25

The occupation authorities of the "DNR" are gradually preparing to conscript men into the so-called "army". This is evidenced by the "decree" of the republican leader, Alexander Zakharchenko, on creation of call-up commissions.

According to this "document", the call-up commissions worked from October 2 to December 25, 2017. Until January 25, 2018, the "chief enlistment officer of the DNR" was obliged to report to Zakharchenko "on the results of activities related to the call of citizens to military duty". However, from the look of it, the executors did not meet the deadline outlined by the "decree": the draft notices with the "invitation" to visit military enlistment offices continue to be received by great number of males. 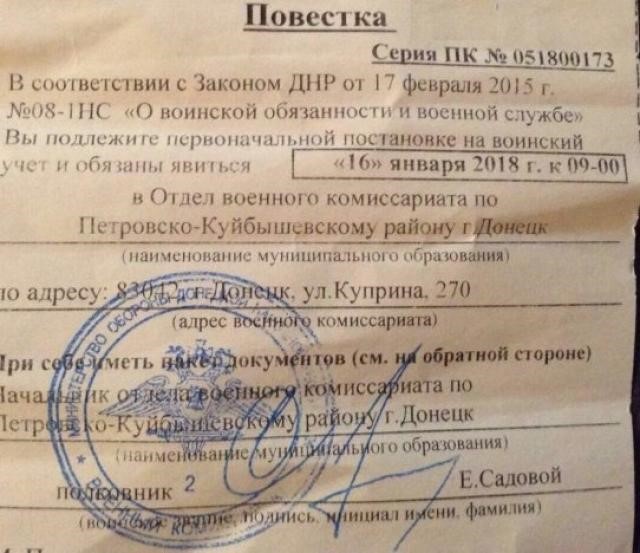 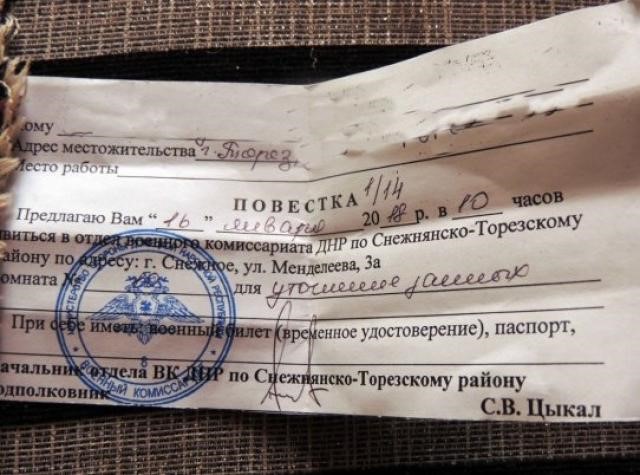 The so-called "chief enlistment officer" of the "republic" Alexander Malkovsky admitted that "military enlistment offices conduct planned measures to check the number of reservists. This is a regular routine procedure, there is no mobilization in the republic. We check the documents of the military registration, the state of citizens' health".

The press service of the "people's militia" also reassures those who do not want to fight for the ideals of the "DNR". "Military enlistment offices of the DNR operate on the same principles as in any other civilized country. But unlike the same Ukraine, the DNR does not call up for military service by force", - local journalists reported.

But the "decree" on the creation of call-up commissions and the draft notices refer to a law "On Military Duty and Military Service", adopted by the "People's Council of the DNR" on February 13, 2015. And it clearly states that there is precisely "the obligation of citizens of the Donetsk People's Republic to perform military service in military formations of the republic and undergo military training". It is noted that "military service is carried out by citizens on conscription and on a voluntary basis (under a contract)". Those, who will not voluntarily obey, will be caught and punished. This is directly stated in the "law": "The MIA bodies (within their competence) are obliged to search for and, on legal grounds, detain citizens evading draft for military service or reservist training... (The objectors - OstroV) are held accountable in accordance with the legislation of the Donetsk People's Republic".

In other words, it is not voluntary at all.

The "decree" of the "DNR" leader on the creation of call-up commissions also refutes the popular in the occupied Donbass fake idea that "boys from good families" are safe from war - only volunteers fight there. The purpose of a large-scale medical examination, according to the "document", is to identify, as they say in military registration and enlistment offices, suitable candidates for military service. It is not about the conscription into the army yet, – the "liable for military service of the DNR" are provided a temporary deferment from the draft or registered as reserved. And this means that they can be dressed in camouflage and sent to the front at any moment.

By the way, unlike the "DNR", where men prefer not to be frightened by possible mobilization, in the occupied Luhansk region, they honestly admit that "the work of military registration and enlistment offices with authorities and the preparation of a mobilization reserve are constantly being held".

The roll call of residents of the occupied Donbass in social networks demonstrates how this "work" looks. People complain that enterprises and state-financed organizations of the "republics" receive orders on the urgent appearance of strong and healthy men in local military registration and enlistment offices, where they are then sent from to "exercises".

So total, albeit undeclared, mobilization gives its own regular results. "It seems that they were choosing near beer shops and rubbish bins", - eyewitnesses describe the regular personnel of potential "defenders".

But there is other information about new principles of forming the militants' army. As active, but unsympathetic supporter of the "LNR" Nikolai Vulich writes in social networks, the authorities are starting to focus on youth.

Information about the fact that volunteers for illegal armed formations of militants of the Luhansk region stopped catering to the needs of the "republic" both in terms of quantitative and qualitative indicators are also confirmed by OstroV's sources. Interlocutor of the news agency confirms that the state-financed organizations and all enterprises of occupied part of the Luhansk oblast have been notified that it is necessary to visit military enlistment offices to simply "check in", allegedly to check the number of people liable for military service. Others note that the private order refers to "checking the number of the male population for possible mobilization for the armed forces". In occupied Luhansk, - local residents report, - the panic talks about mobilization are quite relevant.

By the way, the "Provisional Regulations "Concerning Military Duty and Military Service" clearly says that there is a compulsory conscription in the "LNR", as well as in the neighboring "republic", and in case of calling to the colors, everyone drafted will be "commandeered". 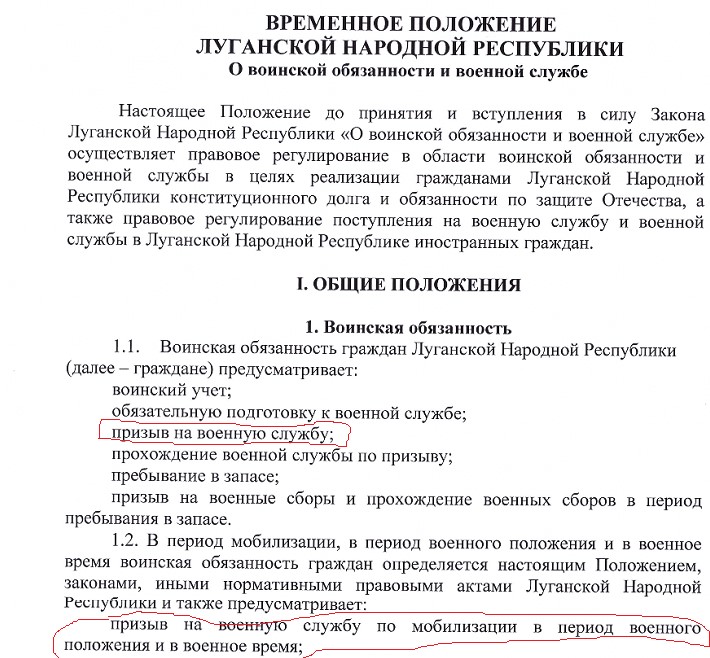